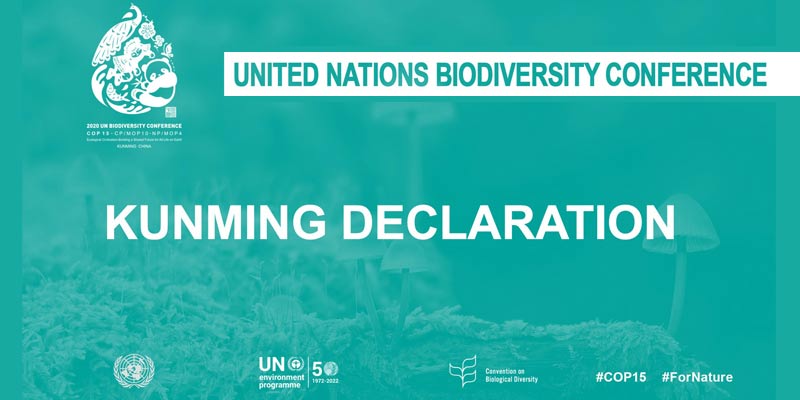 • As many as 195 countries pledged to tackle ecological destruction at the Conference of the Parties to the UN Convention on Biological Diversity (COP15).

• Delegates from some 195 countries said they would support the ‘Kunming Declaration’ — working to tackle issues around biodiversity and species protection — in the first segment of the two-part COP15 summit in the southern Chinese city Kunming.

• The pledge is expected to pave the way for a new accord next year that will set out global conservation targets for 2030 and 2050.

• The declaration urges countries to recognise the importance of biodiversity in human health, strengthen species protection laws, improve the sharing of genetic resources, as well as integrating local communities into conservation work.

• It also addresses previous shortcomings in global efforts at halting biodiversity loss by introducing a monitoring mechanism and better funding for developing nations.

• However, environmentalists said it did not make enough progress on the biodiversity targets decided by countries in the 2010 Aichi agreement.

Key points of the conference:

• The conference’s two-day High-Level Segment (October 12-13) opened with the announcement by Chinese President Xi Jinping of the 1.5 billion-yuan (about $233 million) Kunming Biodiversity Fund.

• The Kunming Declaration was adopted, where Parties to the Convention on Biological Diversity (CBD) committed to negotiate an effective post-2020 global biodiversity framework that can bend the curve of biodiversity loss.

• The landmark framework, due for adoption at the resumption of the UN Biodiversity Conference in May 2022 following further formal negotiations in January 2022, gives clear political direction for those negotiations.

• The UK government and Northern Ireland announced that a significant part of its increased climate funding will be directed towards biodiversity.

• The government of Japan announced a $17 million extension to its Japan Biodiversity Fund.

• A coalition of financial institutions, with assets of 12 trillion euros, committed to protect and restore biodiversity through its activities and investments.

• Important initiatives and commitments introduced during the meeting included the announcement by the Global Environment Facility, in partnership with the United Nations Development Programme (UNDP) and the United Nations Environment Programme (UNEP), that they will fast-track financial and technical support to developing country governments to prepare for the rapid implementation of the post-2020 global biodiversity framework.

• The Convention on Biological Diversity (CBD) Opened for signature in 1992 at the Earth Summit in Rio de Janeiro, and entering into force in December 1993, the CBD is an international treaty for the conservation of biodiversity, the sustainable use of the components of biodiversity and the equitable sharing of the benefits derived from the use of genetic resources.

• With 196 Parties, the CBD has near universal participation among countries. The CBD seeks to address all threats to biodiversity and ecosystem services, including threats from climate change, through scientific assessments, the development of tools, incentives and processes, the transfer of technologies and good practices and the

• The Cartagena Protocol on Biosafety and the Nagoya Protocol on Access and Benefit-Sharing are supplementary agreements to the CBD.

• The Cartagena Protocol, which entered into force on September 11, 2003, seeks to protect biodiversity from the potential risks posed by living modified organisms resulting from modern biotechnology. To date, 173 Parties have ratified the Cartagena Protocol.