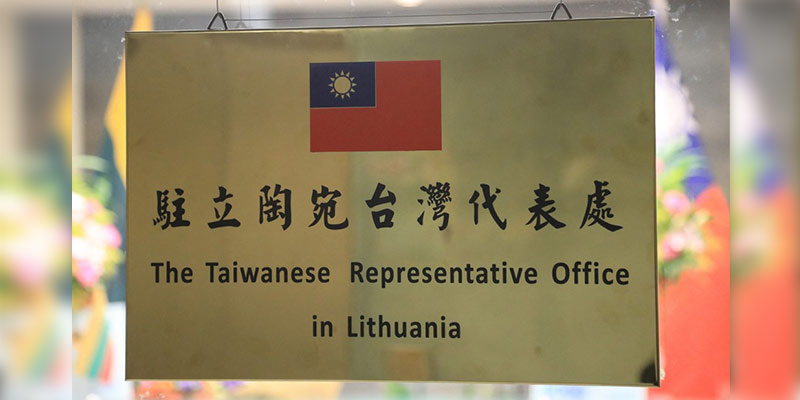 • China downgraded its diplomatic ties with Lithuania, expressing strong dissatisfaction with the Baltic State after Taiwan opened a de facto embassy there.

• China’s foreign ministry said that Lithuania had ignored China’s “solemn stance” and the basic norms of international relations. Beijing said relations would be downgraded to the level of chargé d’affaires.

• Chargé d’affaires in diplomatic parlance means the embassy will be headed by the chief of mission in the absence of the ambassador.

• China has already recalled its envoy from Lithuania’s capital Vilnius.

• The move could further damage Beijing’s relations with the European Union, as the Baltic nation with less than three million population is an influential member of the bloc.

What is the issue between China and Lithuania?

• In May, Lithuania withdrew from the Beijing-led 17+1 cooperation platform with central and eastern European states.

• As it geared up for a diplomatic showdown with China, it moved closer to the US, which for its part has increased support for Taiwan to stave off the threats from China to guard and protect its independent identity.

• Beijing’s conflict with Lithuania comes at a sensitive time when China’s lucrative ties with the EU are under stress over Brussel’s allegations of human rights violations by the communist giant in Xinjiang, Hong Kong and Tibet.

• China has been at loggerheads with Lithuania since the last few months over its decision to permit Taiwan to open its Representative Office.

• Beijing had recalled its ambassador from Vilnius in August and also asked Lithuania to recall its envoy from China.

• However, undaunted, Lithuania went ahead and permitted the opening of the Taiwan Representative Office, regarded as a de facto embassy, prompting Beijing to warn Vilnius of serious consequences.

• China and Taiwan split after the Communist Party seized control of the mainland in 1949 amid a civil war. They have extensive trade and investment ties but no official relations, and China has been using increasingly threatening language toward the island while applying military, diplomatic and economic pressure against it.

• China has claimed democratically-ruled Taiwan through its “one China” policy and has vowed to bring it under Beijing’s rule, by force if necessary. The one-China principle holds that Taiwan and China are part of one country.

• Beijing refuses to recognise the island’s government and has increasingly sought to isolate the independence-leaning administration of President Tsai Ing-wen.

• China views self-ruled and democratically governed Taiwan as its territory with no right to the trappings of a state and has stepped up pressure on countries to downgrade or sever their relations with the island, even non-official ones.

The Baltic States — Estonia, Latvia and Lithuania — share common features and a similar history. These three countries at the EU border with Russia regained their independence from the Soviet Union in the early nineties before joining the EU in 2004 and more recently, the euro area. These countries are leaders in niche technologies.