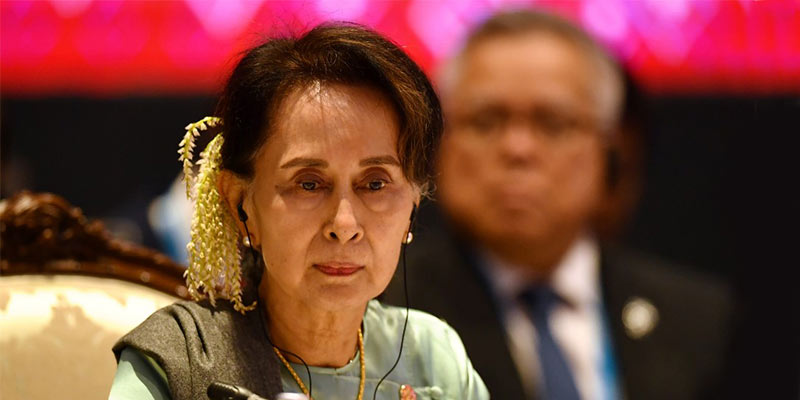 Suu Kyi was convicted last month on two other charges and given a four-year prison sentence, which was then halved by the head of the military-installed government.

The cases are among about a dozen brought against the 76-year-old Nobel Peace Prize laureate since the army seized power in February 2021, ousting her elected government and arresting top members of her National League for Democracy party.

She is on trial in nearly a dozen cases that carry combined maximum sentences of more than 100 years in prison. She denies all charges.

Suu Kyi’s supporters and independent analysts say the charges against her are contrived to legitimize the military’s seizure of power and prevent her from returning to politics.

The United Nations called again for the release of Suu Kyi and all those detained arbitrarily since last February's coup.

The United States, along with other Western nations, has levelled sanctions against the Myanmar military and its businesses since the coup.

• Britain conquered Myanmar, earlier known as Burma, over a period of 62 years (1824-1886) and incorporated it into its Indian Empire. Burma was administered as a province of India until 1937 when it became a separate, self-governing colony.

• On January 4, 1948, the nation became an independent republic.

• Any developments in that country have a direct impact on India’s bordering regions. Peace and stability in Myanmar remain of utmost importance to India, specifically to its North Eastern Region.

• Myanmar and India have shared a historical and cultural past and share friendly relations. Myanmar is the only ASEAN country with which India shares a land border of over 1,600 kms, making it a gateway to ASEAN countries.

• Development cooperation is a prominent feature in India’s overall bilateral cooperation with Myanmar. India’s involvement and assistance in this field extends from the setting up of major connectivity infrastructure to significant initiatives in establishing long-term, sustainable and relevant institutions for capacity building and human resource development in areas such as agricultural research and education, IT and skill development.

• India-Myanmar bilateral trade stood at $1.5 billion in 2019-20. India is one of the largest trading partners of Myanmar.

• India and Myanmar enjoy a robust and expanding partnership in the area of energy cooperation and both sides recognise the mutual benefit of greater integration in the energy sector between the two countries. With investments of over $1.2 billion, Myanmar has the highest Indian investment in any country in South Asia.

• As a democracy and close neighbour, India has been involved in the democratic transition process in Myanmar and in this context has worked with various stakeholders in developing capacities on democratic systems and practices. India proposes to renew these efforts for Myanmar to emerge as a stable, democratic, federal union in accordance with the wishes of the people of Myanmar.