Turkmenistan plans to close its ‘Gateway to Hell’ 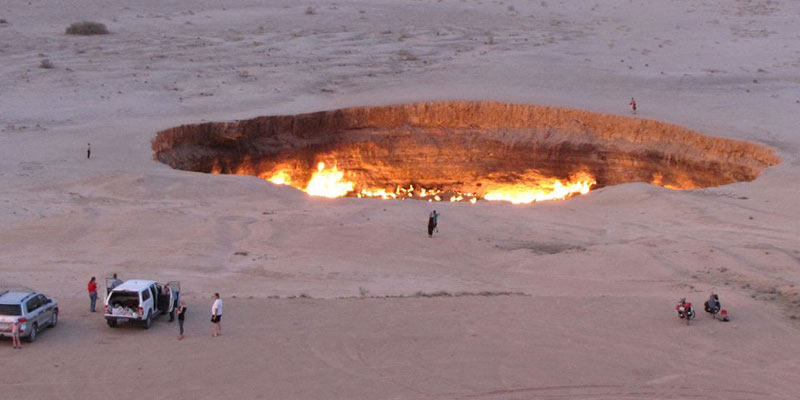 • Turkmenistan’s President Gurbanguly Berdymukhamedov has ordered experts to find a way to finally extinguish a massive five-decade old fire in a giant natural gas crater in the Central Asian country, dubbed the “Gateway to Hell”.

• Berdymukhamedov appeared on state television telling officials to put out the flames at the Darvaza gas crater in the middle of the vast Karakum desert.

• Berdymukhamedov has ordered his government to look for ways to put the fire out because it is causing ecological damage and affecting the health of people living in the area.

• The desert crater located about 260 kilometers north of the capital, Ashgabat, has burned for decades and is a popular sight for the small number of tourists who come to Turkmenistan, a country which is difficult to enter.

• The crater was created in 1971 during a Soviet drilling accident that hit a gas cavern, causing the drilling rig to fall in and the earth to collapse underneath it. To prevent the dangerous fumes from spreading, the Soviets decided to burn off the gas by setting it on fire, expecting the gas to burn off in a few weeks. The pit has been ablaze ever since and previous attempts to put it out have been unsuccessful.

• Local Turkmen geologists presume the pit was formed in the 1960s and was not lit until the 1980s. But the information is classified as Turkmenistan was under Soviet rule at the time.

• In 2010, Berdymukhamedov visited the site and ordered it to be closed, while in 2013, he declared a part of the desert with the pit as a natural reserve. In 2018, he renamed it as the “Shining of Karakum”.

Turkmenistan plans to close its ‘Gateway to Hell’
COPY LINK