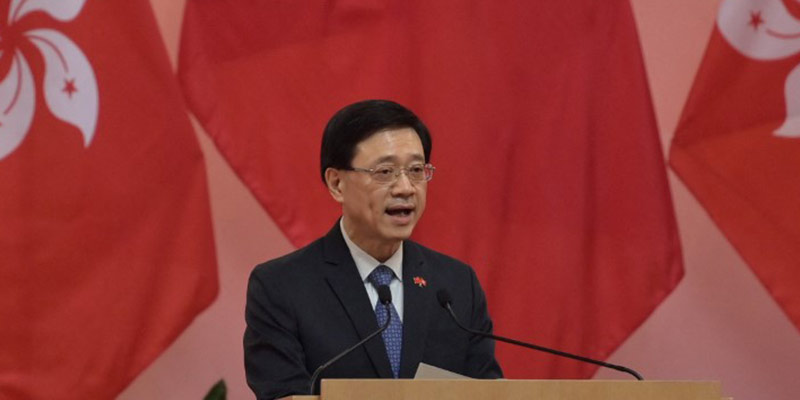 • John Lee, the security chief who oversaw a crackdown on Hong Kong’s pro-democracy movement, was elected as the city’s next leader on May 8 in a vote cast by a largely pro-Beijing committee.

• Lee was the only candidate and won with over 99 per cent of the vote in which nearly all 1,500 committee members were carefully vetted by the central government in Beijing.

• He will replace current leader Carrie Lam on July 1. Her five-term was marked by huge pro-democracy protests calling for her resignation, a security crackdown that has quashed virtually all dissent, the recent COVID-19 wave that had overwhelmed the health system events that have undermined Hong Kong’s reputation as an international business hub with Western-style freedoms.

• The election followed major changes to Hong Kong’s electoral laws last year to ensure that only patriots loyal to Beijing can hold office. The legislature was also reorganised to all but eliminate opposition voices.

• Hong Kong, an economic powerhouse, is a Special Administrative Region (SAR) of China. It has observed a ‘one country, two systems’ policy since Britain returned sovereignty to China on July 1, 1997, which has allowed it certain freedoms the rest of China does not have. But such Western-style liberties, including the freedom of press and assembly, have been seriously eroded with the implementation of the national security law.

• On July 1, the anniversary of Hong Kong’s 1997 handover from Britain to China, Lee will take control of the semi-autonomous territory from Carrie Lam.

• Lee’s role as Hong Kong’s next leader has sparked concern that Beijing could further tighten its grip.

The security chief who oversaw crackdown on protesters

• Lee represents a sea-change from the four chief executives who have run Hong Kong since its 1997 return to Chinese rule — all former business figures or administrators from the civil service.

• Lee, 64, spent more than three decades of his civil service career in the police force before he was appointed undersecretary of Hong Kong’s security bureau in 2012. He was promoted to security minister in 2017 in Lam’s government.

• He was a key figure in pushing for a proposed extradition Bill in 2019 that would’ve sent Hong Kong suspects to mainland China, where courts operate under the ruling Communist Party. But the Bill sparked massive anti-government protests over fears that Beijing was encroaching on Hong Kong’s autonomy, and soon morphed into calls for wider democratic rights, including universal suffrage.

• The government backtracked on the Bill, but under Lee, police unleashed a heavy response that included the use of tear gas and rubber bullets against protesters as well as mass arrests.

• The law, which outlaws secession, subversion, terrorism and collusion with foreign forces in the city’s affairs, was used to clear streets of protesters, silence government opponents and crack down on freewheeling media.

• The same year, Lee and other Chinese as well as Hong Kong officials including Lam were sanctioned by the US for being involved in coercing, arresting, detaining, or imprisoning individuals under the authority of the national security law, as well as being involved in its development, adoption, or implementation.

• In June 2021, Lee was promoted to chief secretary for administration, effectively becoming the No. 2 official in Hong Kong.

• More than 150 people have been arrested under the security law, which outlaws secession, subversion, terrorism and collusion with foreign forces in the city’s affairs. Almost all prominent pro-democracy activists have been jailed, with others fleeing abroad or being intimidated into silence.

• Thousands of residents have left the city of 7.4 million people amid the 2019 protests and subsequent harsh pandemic restrictions, including many professionals and expatriates.