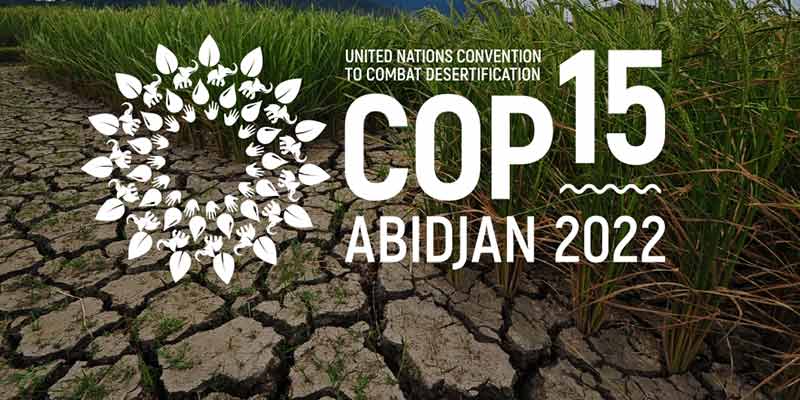 • The 15th session of the Conference of the Parties (COP15) of the United Nations Convention to Combat Desertification (UNCCD) is being held in Abidjan, Côte d’Ivoire (Ivory Coast), from May 9-20.

• COP15 brings together leaders from governments, the private sector, civil society and other key stakeholders from around the world to drive progress in the future sustainable management of land.

• India is working towards restoring 2.6 crore hectares of degraded land by 2030.

What is land degradation?

Land degradation is caused by multiple forces, including extreme weather conditions, particularly drought. It is also caused by human activities that pollute or degrade the quality of soils and land utility. It negatively affects food production, livelihoods, and the production and provision of other ecosystem goods and services.

Desertification is not the natural expansion of existing deserts but the degradation of land in arid, semi-arid, and dry sub-humid areas. It is a gradual process of soil productivity loss and the thinning out of the vegetative cover because of human activities and climatic variations such as prolonged droughts and floods. What is alarming is that though the land's topsoil, if mistreated, can be blown and washed away in a few seasons, it takes centuries to build up. Among human causal factors are overcultivation, overgrazing, deforestation, and poor irrigation practices. Such overexploitation is generally caused by economic and social pressure, ignorance, war, and drought.

Desertification is a global issue

• Desertification is a worldwide problem directly affecting 25 crore people and a third of the Earth's land surface or over 4 billion hectares. In addition, the livelihoods of some one billion people who depend on land for most of their needs and usually the world’s poorest in over one hundred countries are threatened.

• Though desertification affects Africa the most, where two-thirds of the continent is desert or drylands, it is not a problem confined to drylands in Africa. Over 30 per cent of the land in the United States is affected by desertification. One quarter of Latin America and the Caribbean is deserts and drylands.

• In Spain, one fifth of the land is at risk of turning into deserts. The growing severity of the threat in the Northern Hemisphere is also illustrated by severe droughts in the United States and water scarcity in southern Europe.

• Worldwide, some 70 per cent of the 5.2 billion hectares of drylands used for agriculture are already degraded and threatened by desertification. 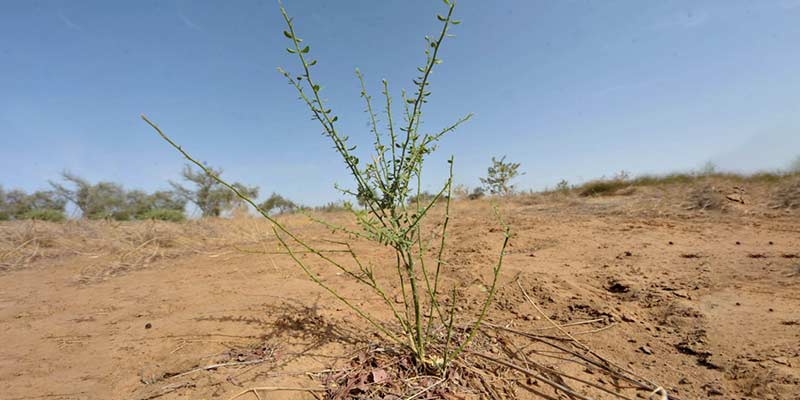 • The theme of COP15 is ‘Land. Life. Legacy: From scarcity to prosperity’. It is a call to action to ensure land, the lifeline on this planet, continues to benefit present and future generations.​

• Land is the bedrock of a healthy, productive society, and COP15 will explore links between land and other key sustainability issues.

• These issues will be discussed during the high-level segment, including a Heads of States Summit, high-level roundtables and interactive dialogue sessions, as well as numerous other special and side events. ​

• COP15 is expected to agree on actions to increase investment for land restoration and tackle the growing impacts of drought.

• At the top of the COP15 agenda are the restoration of one billion hectares of degraded land between now and 2030 and future-proofing people, their homes and lands against the impacts of disaster risks linked to climate change, such as droughts, and sand and dust storms.

• COP15 is also expected to agree on policy actions to provide an enabling environment for land restoration through stronger tenure rights, gender equality, land use planning and youth engagement to draw private sector investment to conservation, farming, and land uses and practices to improve the health of the land.

• COP15 is a key moment in the fight against desertification, land degradation and drought. It will build on the findings of the second edition of the Global Land Outlook and offer a concrete response to the interconnected challenges of land degradation, climate change and biodiversity loss as we step into the UN Decade on Ecosystem Restoration. ​

• Drought, land restoration, and related enablers such as land rights, gender equality and youth empowerment are among the top items on the Conference agenda. Through its decisions adopted by UNCCD’s 197 Parties, COP15 is expected to galvanize sustainable solutions for land restoration and drought resilience, with a strong focus on future-proofing land use.​

• UNCCD COP15 is the first of the three Rio Conventions meetings to be held in 2022, with Biodiversity COP15 and Climate change COP27 convening later on in Kunming, China and Sharm El-Sheikh, Egypt, respectively.

• The United Nations Convention to Combat Desertification (UNCCD) is the sole legally binding international agreement linking environment and development to sustainable land management. The Convention addresses specifically the arid, semi-arid and dry sub-humid areas, known as the drylands, where some of the most vulnerable ecosystems and peoples can be found.

• The Convention was adopted in Paris on June 17, 1994 and entered into force on December 26, 1996 after the 50th ratification was received.

• It is the only legally binding framework set up to address desertification and the effects of drought.

• There are 197 Parties to the Convention, including 196 country Parties and the European Union.

• The Convention’s 197 Parties work together to improve the living conditions for people in drylands, to maintain and restore land and soil productivity, and to mitigate the effects of drought.

• Parties to the Convention meet in Conferences of the Parties (COP) every two years, as well as in technical meetings throughout the year, to advance the aims and ambitions of the Convention and achieve progress in its implementation.

• It unites governments, scientists, policymakers, private sector and communities around a shared vision and global action to restore and manage the world’s land for the sustainability of humanity and the planet.

• The UNCCD is particularly committed to a bottom-up approach, encouraging the participation of local people in combating desertification and land degradation.

• The UNCCD Secretariat facilitates cooperation between developed and developing countries, particularly around knowledge and technology transfer for sustainable land management.

• Much more than an international treaty signed by 197 parties, UNCCD is a multilateral commitment to mitigating today’s impacts of land degradation and advancing tomorrow’s land stewardship in order to provide food, water, shelter and economic opportunity to all people in an equitable and inclusive manner.

• As the dynamics of land, climate and biodiversity are intimately connected, the UNCCD collaborates closely with the other two Rio Conventions — the Convention on Biological Diversity (CBD) and the United Nations Framework Convention on Climate Change (UNFCCC), to meet these complex challenges with an integrated approach and the best possible use of natural resources.