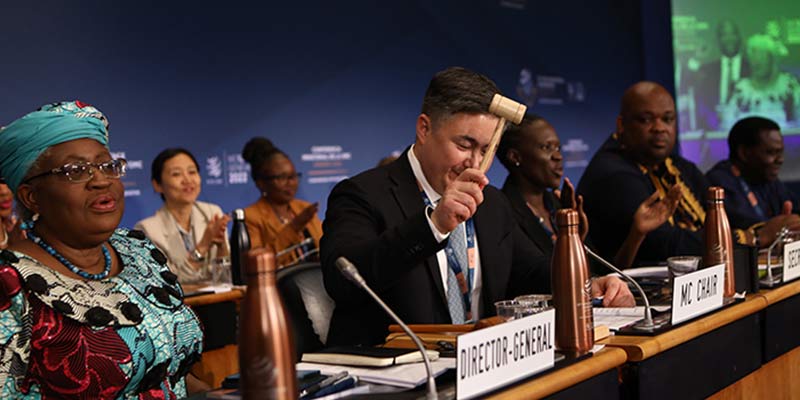 • The “Geneva Package” confirms the historical importance of the multilateral trading system and underlines the important role of the WTO in addressing the world’s most pressing issues, especially at a time when global solutions are critical.

• WTO Director-General Nzogi Okonjo-Iweala said the package of agreements will make a difference to the lives of people around the world.

• Union Minister Piyush Goyal said India has been able to secure a favourable outcome at the WTO after many years.

What is the WTO?

• The World Trade Organisation (WTO) is the only global international organisation dealing with the rules of trade between nations.

• The primary purpose of the WTO is to open trade for the benefit of all.

• At its heart are the WTO agreements, negotiated and signed by the bulk of the world’s trading nations and ratified in their parliaments. The goal is to ensure that trade flows as smoothly, predictably and freely as possible.

• The WTO came into being on January 1, 1995. But its trading system is half a century older. Since 1948, the General Agreement on Tariffs and Trade (GATT) had provided the rules for the system. Whereas GATT had mainly dealt with trade in goods, the WTO and its agreements cover trade in services, and in traded inventions, creations and designs (intellectual property).

• The WTO provides a forum for negotiating agreements aimed at reducing obstacles to international trade and ensuring a level playing field for all, thus contributing to economic growth and development.

• It also provides a legal and institutional framework for the implementation and monitoring of these agreements, as well as for settling disputes arising from their interpretation and application.

• The WTO currently has 164 members, accounting for 98 per cent of world trade. A total of 25 countries are negotiating membership.

• The WTO’s top level decision-making body is the Ministerial Conference, which meets usually every two years.

• WTO activities are supported by a Secretariat led by the WTO Director-General. The Secretariat is located in Geneva, Switzerland.

• The General Council meets regularly to carry out the functions of WTO. It has representatives (usually ambassadors or equivalent) from all member governments and has the authority to act on behalf of the ministerial conference which only meets about every two years. 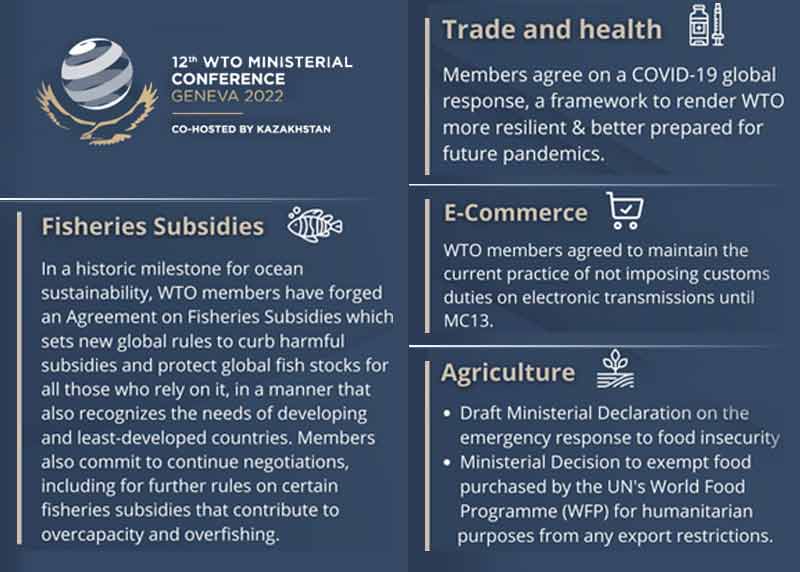 • The WTO’s 12th Ministerial Conference was originally scheduled to take place in June 2020 in Nur-Sultan, Kazakhstan, but was postponed due to the COVID-19 pandemic.

• MC12 was held at WTO headquarters in Geneva from June 12-17, 2022. Initially scheduled to end on June 15, the ministerial gathering was extended by two days to allow more time for negotiations and reaching agreements.

• Co-hosted by Kazakhstan, the Conference was chaired by Timur Suleimenov, First Deputy Chief of Staff of the Kazakh President.

The package adopted by members include:

i) Ministerial Declaration on the Emergency Response to Food Insecurity.

iii) Ministerial Declaration on the WTO Response to the COVID-19 Pandemic and Preparedness for Future Pandemics.

iv) Ministerial Decision on the Agreement on Trade-related Aspects of Intellectual Property Rights.

v) Decision on the E-commerce Moratorium and Work Programme.

• There would be a check on illegal unreported and unregulated fishing. There would be very strict controls on overfished areas so that fish stocks are restored. Additionally, no subsidies to be provided for fishing in areas outside Exclusive Economic Zone (EEZ) or regional fisheries management organisations (RFMOs).

• The deal on a partial IP waiver to allow developing countries to produce and export COVID-19 vaccines has divided the WTO for nearly two years, but finally passed.

• The TRIPS (Trade-Related Aspects of Intellectual Property Rights) waiver compromise will contribute to ongoing efforts to concentrate and diversify vaccine manufacturing capacity so that a crisis in one region does not leave others cut off.

• In addition, ministers adopted two decisions — on the Work Programme on Small Economies and on the TRIPS non-violation and situation complaints — and a Sanitary and Phytosanitary Declaration for the Twelfth WTO Ministerial Conference: Responding to Modern SPS Challenges.

• Ministers also agreed on a process for addressing long-standing calls for reform of the WTO. The Ministerial Declaration commits members to an open, transparent and inclusive process overseen by the WTO’s General Council, which will consider decisions on reform for submission to the 13th Ministerial Conference (MC13).