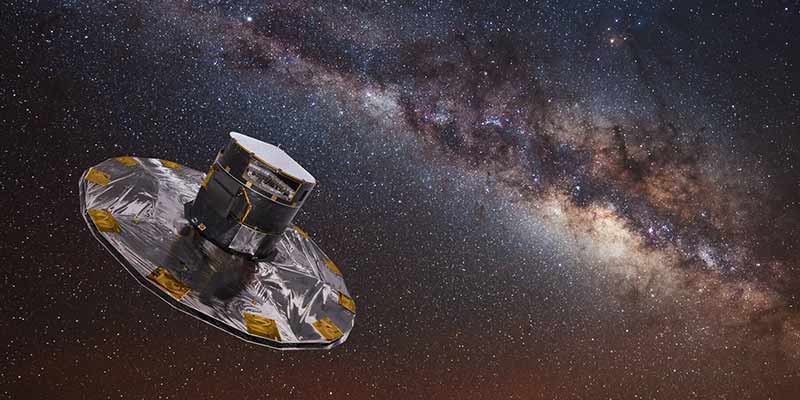 The European Space Agency’s Gaia space probe unveiled its latest discoveries in its quest to map the Milky Way in unprecedented detail, surveying nearly two million stars and revealing mysterious ‘starquakes’ which sweep across the fiery giants like vast tsunamis.

Gaia’s data release contains new information including chemical compositions, stellar temperatures, colours, masses, ages, and the speed at which stars move towards or away from us (radial velocity).

Also new in this data set is the largest catalogue yet of binary stars, thousands of solar system objects such as asteroids and moons of planets, and millions of galaxies and quasars outside the Milky Way.

• Gaia is ESA’s mission to create the most accurate and complete multi-dimensional map of the Milky Way. This allows astronomers to reconstruct our home galaxy’s structure and past evolution over billions of years, and to better understand the lifecycle of stars and our place in the Universe.

• The name ‘GAIA’ was originally derived as an acronym for Global Astrometric Interferometer for Astrophysics. This reflected the optical technique of interferometry that was originally planned for use on the spacecraft. However, the working method changed, and although the acronym is no longer applicable, the name Gaia remains to provide continuity with the project.

• It will create an extraordinarily precise three-dimensional map of more than a thousand million stars throughout our Milky Way galaxy and beyond, mapping their motions, luminosity, temperature and composition.

• The Gaia spacecraft is nestled in a strategically positioned orbit 1.5 million kilometres from Earth, where it has been watching the skies since it was launched in 2013.

• The probe is equipped with two telescopes as well as a billion-pixel camera, which captures images sharp enough to gauge the diameter of a human hair at a distance of 1,000 kilometres.

• It also has a range of other instruments that allow it to not just map the stars, but measure their movements, chemical compositions and ages.

• Around 50 scientific papers were published alongside the new data, with many more expected in the coming years. Gaia’s observations have fuelled thousands of studies since its first dataset was released in 2016.

• The final data set will be released in 2030, after Gaia finishes its mission surveying the skies in 2025.

Highlights of the new data release

One of the most surprising discoveries coming out of the new data is that Gaia is able to detect starquakes – tiny motions on the surface of a star – that change the shapes of stars, something the observatory was not originally built for.

Previously, Gaia already found radial oscillations that cause stars to swell and shrink periodically, while keeping their spherical shape. But Gaia has now also spotted other vibrations that are more like large-scale tsunamis. These non-radial oscillations change the global shape of a star and are therefore harder to detect. Gaia found strong non-radial starquakes in thousands of stars.

Gaia not only maps the stars but tells us what is in between the stars. The space between stars is not empty but instead filled with dust and gas clouds, out of which stars are born.

Through the precise measurements of the stars’ positions and their dispersed light, Gaia helps to map the absorption of the starlight by the interstellar medium. Those maps provide us with essential clues to the physical mechanisms of the formation of stars, galaxies, and the history of our home galaxy.

The DNA of stars

What stars are made of can tell us about their birthplace and their journey afterwards, and therefore about the history of the Milky Way. With the new data release, Gaia is bringing a chemical map of the galaxy.

Some stars contain more ‘heavy metals’ than others. During the Big Bang, only light elements were formed (hydrogen and helium). All other heavier elements – metals – are built inside stars. When stars die, they release these metals into the gas and dust between the stars called the interstellar medium, out of which new stars form. Active star formation and death will lead to an environment that is richer in metals. Therefore, a star’s chemical composition is a bit like its DNA, giving us crucial information about its origin.

With Gaia, we see that some stars in our galaxy are made of primordial material, while others like our Sun are made of matter enriched by previous generations of stars. Stars closer to the centre and plane of our galaxy are richer in metals than stars at larger distances.