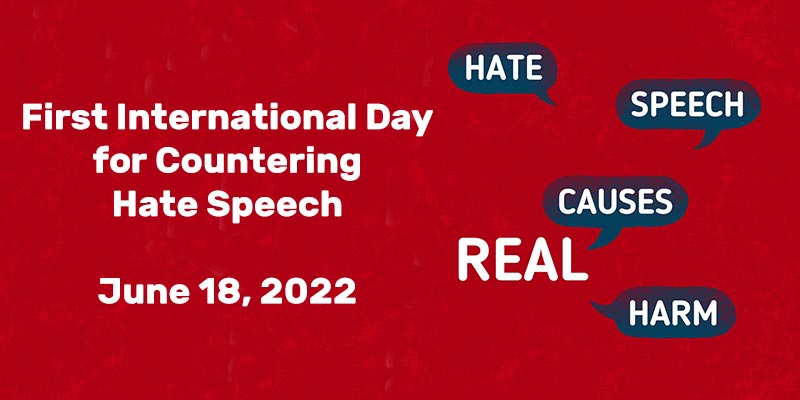 The United Nations observes the first International Day for Countering Hate Speech on June 18. It is established by the United Nations General Assembly over concerns about the rising proliferation of the phenomenon worldwide.

Incitement is a very dangerous form of speech

• There is no international legal definition of hate speech. The term hate speech is understood as any kind of communication in speech, writing or behaviour that attacks or uses pejorative or discriminatory language with reference to a person or a group on the basis of who they are, in other words, based on their religion, ethnicity, nationality, race, colour, descent, gender or other identity factor. This generates intolerance and hatred and, in certain contexts, can be demeaning and divisive.

• Hate speech incites violence and undermines social cohesion and tolerance. The devastating effect of hatred is sadly nothing new. However, its scale and impact are nowadays amplified by new technologies of communication, to the point that hate speech has become one of the most frequent methods for spreading divisive rhetoric and ideologies on a global scale and threatening peace.

• Incitement is a very dangerous form of speech, because it explicitly and deliberately aims at triggering discrimination, hostility and violence, which may also lead to or include terrorism or atrocity crimes.

• Hate speech not only affects the specific individuals and groups targeted, but societies at large.

• The escalation from hate speech to violence has played a significant role in the most horrific and tragic crimes of the modern age, from the antisemitism driving the Holocaust, to the 1994 genocide against the Tutsi in Rwanda.

• The world must not trample on freedom of speech and expression, but when that speech is weaponised to violate the rights of others—including inciting atrocity crimes and acts of terrorism, it must not be met with deafening silence that implies apathy or acceptance.

• The Internet and social media have turbocharged hate speech, enabling it to spread like wildfire across borders. The spread of hate speech against minorities during the COVID-19 pandemic provides further evidence that many societies are highly vulnerable to the stigma, discrimination and conspiracies it promotes.

• If left unchecked, hate speech can even harm peace and development, as it lays the ground for conflicts and tensions and wide scale human rights violations.

• The impact of hate speech cuts across numerous existing United Nations areas of focus, from human rights protection and prevention of atrocity crimes to sustaining peace and achieving gender equality and supporting children and youth.

• In July 2021, the UN General Assembly highlighted global concerns over “the exponential spread and proliferation of hate speech” around the world and adopted a resolution on “promoting inter-religious and intercultural dialogue and tolerance in countering hate speech”.

• The resolution recognises the need to counter discrimination, xenophobia and hate speech and calls on all relevant actors, including States, to increase their efforts to address this phenomenon, in line with international human rights law.

• The resolution proclaimed June 18 as the International Day for Countering Hate Speech, which is marked for the first time in 2022.

• Hate speech is a danger to everyone and fighting it is a job for everyone. This first International Day to Counter Hate Speech is a call to action.