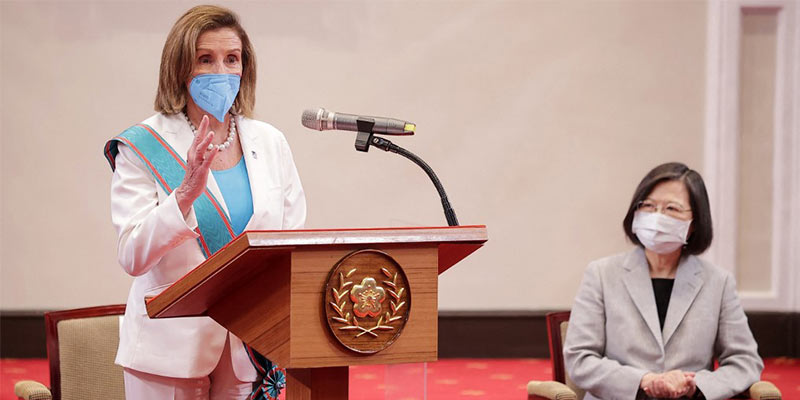 US House Speaker Nancy Pelosi arrived in Taiwan on August 2, becoming the highest-ranking American official in 25 years to visit the self-ruled island claimed by China, which quickly announced that it would conduct military maneuvers in retaliation for her presence.

Her arrival prompted a furious response from China at a time when international tensions already are elevated by Russia’s invasion of Ukraine.

• China and Taiwan split after the Communist Party seized control of the mainland in 1949 amid a civil war. They have extensive trade and investment ties but no official relations, and China has been using increasingly threatening language toward the island while applying military, diplomatic and economic pressure against it.

• China has claimed democratically-ruled Taiwan through its “One China” policy and has vowed to bring it under Beijing’s rule, by force if necessary. The “One China” principle holds that Taiwan and China are part of one country.

• Beijing refuses to recognise the island’s government and has increasingly sought to isolate the independence-leaning administration of President Tsai Ing-wen.

• China views self-ruled and democratically governed Taiwan as its territory with no right to the trappings of a state and has stepped up pressure on countries to downgrade or sever their relations with the island, even non-official ones.

• China has been increasing both diplomatic and military pressure in recent years. It cut off all contact with Taiwan’s government in 2016 after President Tsai Ing-wen refused to endorse its claim that the island and mainland together make up a single Chinese nation, with Communist Beijing the sole legitimate government.

Why is China furious over Pelosi’s visit to Taiwan?

• Pelosi, 82, is a close ally of US President Joe Biden, both being members of the Democratic Party, and has helped guide his legislative agenda through Congress.

• Pelosi’s trip has heightened US-China tensions more than visits by other members of Congress because of her high-level position as leader of the House of Representatives. She is the first Speaker of the house to come to Taiwan in 25 years, since Newt Gingrich in 1997.

• China claims Taiwan as part of its territory, and it views visits by foreign government officials as them recognising the island’s sovereignty.

• China has summoned the American envoy in Beijing to lodge a stern protest over Pelosi's high-profile visit to Taipei.

• The Biden administration, and Pelosi, say the United States remains committed to its One-China policy, which recognises Beijing but allows informal relations and defense ties with Taipei.

• Shortly after Pelosi landed, China announced live-fire drills as well as a four-day exercise in waters on all sides of the island.