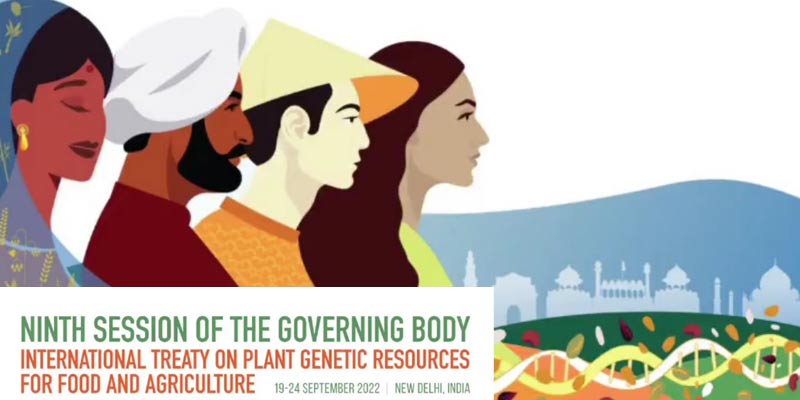 The 9th Session of the governing body of the International Treaty of Plant Genetic Resources for Food and Agriculture (ITPGRFA) will be held in New Delhi from September 19-24.

ITPGRFA is a comprehensive international agreement for ensuring food security through the conservation, exchange and sustainable use of the world’s plant genetic resources for food and agriculture (PGRFA), as well as the fair and equitable benefit sharing arising from its use. It also recognises farmers’ rights, subject to national laws.

Also known as the Seed Treaty, ITPGRFA was adopted by the 31st session of the Conference of Food and Agriculture Organisation (FAO) of the United Nations in November 2001. The treaty, which came in force on June 29, 2004 has been ratified by 149 countries including India.

The Treaty aims at:

• Recognising the enormous contribution of farmers to the diversity of crops that feed the world.

• Ensuring that recipients share benefits they derive from the use of these genetic materials with the countries where they have originated.

Main provisions of the Treaty:

i) Multilateral System: The Treaty’s truly innovative solution to access and benefit sharing — the Multilateral System — puts 64 of our most important crops, that together account for 80 per cent of the food we derive from plants, into an easily accessible global pool of genetic resources that is freely available to potential users in the Treaty’s ratifying nations for some uses.

ii) Access and Benefit Sharing: The Treaty facilitates access to the genetic materials of the 64 crops in the Multilateral System for research, breeding and training for food and agriculture. Those who access the materials must be from the Treaty’s ratifying nations and they must agree to use the materials totally for research, breeding and training for food and agriculture. The Treaty prevents the recipients of genetic resources from claiming intellectual property rights over those resources in the form in which they received them, and ensures that access to genetic resources already protected by international property rights is consistent with international and national laws. Those who access genetic materials through the Multilateral System agree to share any benefits from their use through four benefit-sharing mechanisms established by the Treaty.

iii) Farmers’ Rights: The Treaty recognises the enormous contribution farmers have made to the ongoing development of the world’s wealth of plant genetic resources. It calls for protecting the traditional knowledge of these farmers, increasing their participation in national decision-making processes and ensuring that they share in the benefits from the use of these resources

iv) Sustainable Use: Most of the world’s food comes from four main crops – rice, wheat, maize and potatoes. However, local crops, not among the main four, are a major food source for hundreds of millions of people and have potential to provide nutrition to countless others. The Treaty helps maximise the use and breeding of all crops and promotes development and maintenance of diverse farming systems.

What to expect in GB9?

• Every country has its own germplasm and biodiversity in agriculture. Its conservation, access, benefit sharing and protecting the farmers’ rights, all these issues will be discussed in the 9th session of the governing body (GB9) of ITPGRFA.

• A week-long GB9 will be attended by 50-60 agricultural ministers of different countries and 400 delegates from across the world. There will also be a special session on millets in the run-up to the ‘International Year of Millets 2023’.

• The GB9 with the theme “Celebrating the guardians of crop diversity: towards an inclusive post-2020 global biodiversity framework” aims to acknowledge the contribution of the world's smallholder farmers to the effective management of plant genetic resources for food and agriculture.

• It is expected to consider capacity development strategy for the treaty, funding plans, resource mobilisation and the budget. Besides, it will discuss conservation and sustainable use of PGRFA and agriculture, multi-year programme of work, including digital sequence information.

• Dialogues would be held to further strengthen clauses under the treaty and in the context of Convention of Biological Diversity (CBD) and its Nagoya Protocol, Commission on Genetic Resources for Food and Agriculture, Global Crop Diversity Trust, and new Global Biodiversity Framework.

• As GB9 host, India, which has the world’s second largest gene bank in agriculture after the US, is expected to play a crucial role in minimising the dissonance between technology-rich developed and gene-rich developing countries to achieve functional resolutions on critical agenda items.