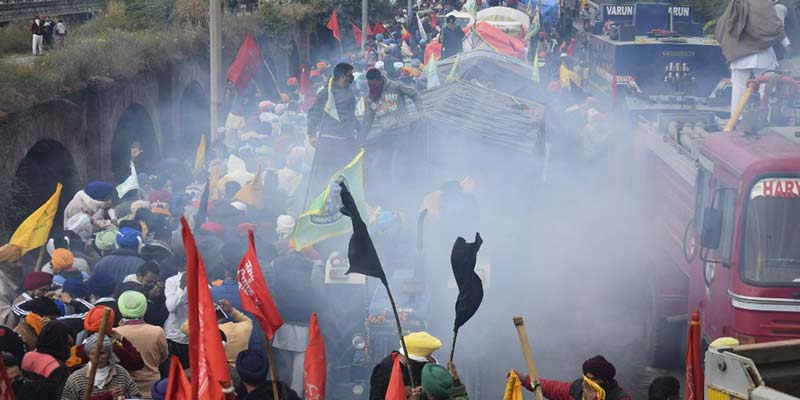 Thousands of farmers have reached the national capital on their tractor-trolleys and other vehicles, responding to the ‘Delhi Chalo’ call against the agri-marketing laws enacted by the Centre in September.

What are the demands of farmers?

• Farmer unions in Punjab and Haryana say the recent laws enacted at the Centre will dismantle the minimum support price (MSP) system. Over time, big corporate houses will dictate terms and farmers will end up getting less for their crops, they argue.

• Farmers fear that with the virtual disbanding of the mandi system, they will not get an assured price for their crops and the arthiyas — commission agents who also pitch in with loans for them —  will be out of business.

• Their key demand is the withdrawal of the three laws which deregulate the sale of their crops. The farmer unions also demand a legal assurance that the MSP system will continue, ideally through an amendment to the laws.

• They are also pressing for the withdrawal of the proposed Electricity (Amendment) Bill 2020, fearing it will lead to an end to subsidised electricity.

• Meanwhile, the Narendra Modi government assures that the new laws will give more options to the farmers to sell their crops and get them better prices. It has assured that there is no move to end the MSP system, and the new Acts do not refer to it.

• Before Delhi Chalo farmers in Punjab and Haryana held sit-ins and blocked roads. Punjab farmer unions then announced a ‘rail roko’ agitation, which lasted for about two months, leading to a suspension of trains to the state and shortages in critical areas, including coal for thermal power stations.

• The ‘Delhi Chalo’ call was given by the All India Kisan Sangharsh Coordination Committee.  Several other organisations including Rashtriya Kisan Mahasangh and factions of the Bharatiya Kisan Union (BKU) came out in support.

• Most protesters are from Punjab, but there is a substantial number from Haryana as well. There has been support for the protest from Uttar Pradesh, Rajasthan, Madhya Pradesh and Uttarakhand. 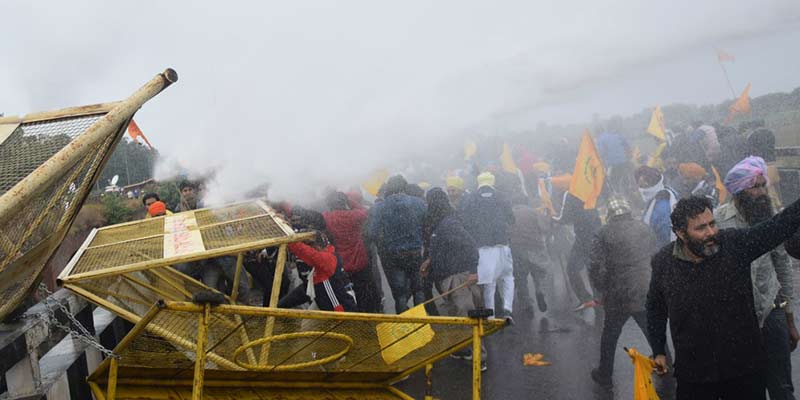 What are the new agri sector laws?

The Farmers’ Produce Trade and Commerce (Promotion and Facilitation) Act, 2020

• According to the government, the new legislation will create an ecosystem where the farmers and traders will enjoy freedom of choice of sale and purchase of agri-produce.

It will also promote barrier-free inter-state and intra-state trade and commerce outside the physical premises of markets notified under State Agricultural Produce Marketing legislations.

• The farmers will not be charged any cess or levy for sale of their produce and will not have to bear transport costs.

• It also proposes an electronic trading in transaction platform for ensuring a seamless trade electronically. In addition to mandis, freedom to do trading at farmgate, cold storage, warehouse, processing units, etc.

• Farmers will be able to engage in direct marketing, thereby eliminating intermediaries resulting in full realisation of price.

The Farmers (Empowerment and Protection) Agreement of Price Assurance and Farm Services Act, 2020

• In case of higher market price, farmers will be entitled to this price over and above the minimum price.

• It will transfer the risk of market unpredictability from the farmer to the sponsor. Due to prior price determination, farmers will be shielded from the rise and fall of market prices.

• It will also enable the farmer to access modern technology, better seed and other inputs. It will reduce the cost of marketing and improve income of farmers.

• Effective dispute resolution mechanism has been provided for with clear timelines for redressal.

• Impetus to research and new technology in the agriculture sector.

• The Essential Commodities Act, which was passed in 1955, controls the production, supply and distribution of, and trade and commerce in, certain goods which are treated as essential commodities. Under the Act, the powers to implement the provisions of the Act are delegated to the states. When the price of any of these essential commodities rises, the regulator can impose stock holding limits on the commodity, restrict movement of goods and mandate compulsory purchases under the system of levy.

• Essential Commodities (Amendment) Act, 2020 has provisions to remove commodities like cereals, pulses, oilseeds, edible oils, onion and potatoes from the list of essential commodities. It provides for the regulation of food items only under exceptional circumstances like national calamities, famine with a surge in prices. Also, processors and value chain participants are exempted from the stock limit.

• The Union power ministry had in April come out with the fourth draft of the Electricity (Amendment) Bill since 2014, which seeks to set up an Electricity Contract Enforcement Authority (ECEA) having power of a civil court to settle disputes related to power purchase agreement between discoms and gencos.

• The draft provides that the ECEA will have sole authority to adjudicate matters related to specific performance of contracts related to purchase or sale of power, between power generation companies (gencos) and distribution companies (discoms).

The ministry of power has clarified that the draft proposal for amendments in Electricity Act, 2003 has following objectives:

• Enhance sustainability of the power sector

• Some states have objected to the proposal of doing away with free power to farmers and replacing it with the direct benefit scheme. Maharashtra said the Bill was violative of the constitutional mandate and undermined the federal structure. The seventh schedule of the Constitution of India empowers both, the central and state governments to enact laws on matters related to electricity as it is included in the concurrent list.