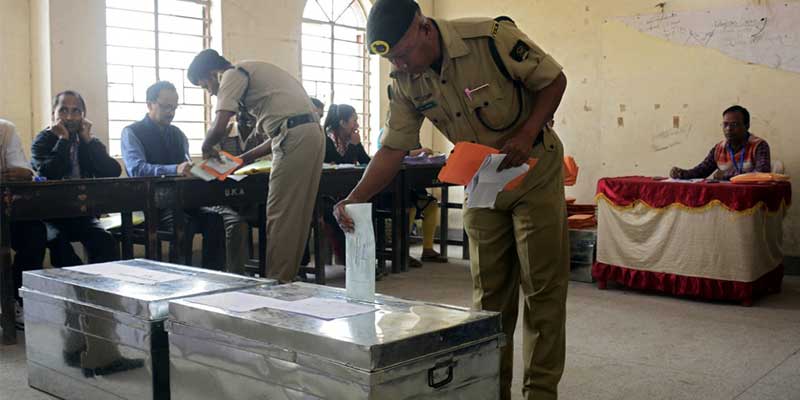 • The Election Commission has proposed to the government to extend the Electronically Transmitted Postal Ballot System (ETPBS) facility, so far available to service voters, to eligible overseas Indian voters.

• In a letter to the legislative secretary in the law ministry on November 27, the EC said with the successful execution of ETPBS in case of service voters, it is now confident that the facility can also be extended to the overseas electors.

• The EC requested the government to make necessary amendments at the earliest which will go a long way in not only facilitating exercise of right of overseas electors but also further boosting the image of the country internationally.

• The poll panel said it is technically and administratively ready to extend this facility in general elections to legislative assemblies of Assam, West Bengal, Kerala, Tamil Nadu and Puducherry. Elections in these states are due sometime in April-June next year.

What is the difference between postal ballot and ETPBS?

• The postal ballot papers to service voters are sent by the Returning Officer after printing the ballot for each and every service voter of the constituency, and then put it in an envelope inscribed with the address of the Record Office of each service voter. This takes a lot of resources, effort and time, thus increasing the chance of mistake, since each ballot needs to be printed and put in the correct envelope.

• Electronically Transmitted Postal Ballot System (ETPBS) is one-way electronic transmission of the postal ballots to service voters. The service voter then casts his/her vote and sends it to the respective Returning Officer via Post.

How does ETPBS work?

• Returning Officer generates ballot paper electronically by a specific desktop application. The list of the candidates is punched along with their party names. This ballot then gets encrypted in the system and is ready to be sent.

• Through the ETPBS system, the ballots are automatically assigned to service voters based upon their constituency and then gets transmitted. The unit officer downloads the postal ballots on behalf of the service voter. These downloaded ballots will be password protected.

• The downloaded postal ballot can now be e-transmitted/hand-delivered using their secured network/infrastructure to service voters.

• The PIN will be transmitted/dispatched to each service voter by the Record Officer to ensure that the downloaded postal ballot is opened by the concerned service voter only.

• The service voter has to return it to the Returning Officer of his constituency. The postal ballot should reach the returning officer by 8am on the day of the counting. Counting of votes begins with counting of postal ballots at 8am.

• The complete process is secured by way of multiple checks and transmission protocol to ensure safe transmission. Upon receipt of the postal ballot at the counting centres, the Returning Officer validates the receipt by a series of QR codes with that of the transmitted system.

What are the features of ETPBS?

• Electronically transmitted Postal Ballot System (ETPBS) was developed by Election Commission of India with the help of Centre for Development of Advanced Computing (C-DAC) in 2016.

• It is a fully secured system, having two layers of security. Secrecy is maintained through the use of OTP and PIN and no duplication of casted Electronically Transmitted Postal Ballot (ETPB) is possible due to the unique QR code.

• It enables eligible voters to cast their votes on an electronically received postal ballot from their preferred location, which is outside their originally assigned voting constituency. This system would be an easier option of facilitating voting by the electors as the time constraint for dispatch of postal ballot has been addressed using this system. ETPBS has nearly halved the time in sending and receiving postal ballots from far-flung areas.

Who are service voters?

• The wife of a service voter who ordinarily resides with him is also eligible for ETPBS.

What is the significance of this new proposal?

• The poll panel has been receiving several representations from Indian diaspora residing abroad to facilitate voting through postal ballots since such overseas electors are not in a position to be present in their polling area as travelling to India for this purpose is a costly affair and otherwise also, they cannot leave the country of their residence owing to specific compulsions of employment, education or other engagements.

• Only a little over 25,000 of the nearly one lakh overseas Indians who had registered as voters flew down to India to exercise their franchise in the 2019 Lok Sabha polls, according to data issued by the Election Commission.

• Section 62 of the Representation of the People Act, 1951 envisages the right to vote for every citizen registered in the electoral roll who is not subject to disqualification for voting.

• Therefore, it is necessary to explore all avenues to enable exercise of a franchise by all eligible electors.

• As of now, overseas Indians are free to cast their votes in constituencies they are registered in.

• A Bill to extend the facility of proxy voting to overseas Indians had lapsed following the dissolution of the 16th Lok Sabha in 2019. The Bill had proposed that overseas Indians, who are entitled to vote in India, can appoint a proxy voter to cast the ballot on their behalf.

• An expert committee of the Election Commission, working on the issue, had in 2015 forwarded the legal framework to the law ministry to amend the electoral laws to allow the overseas Indians to use proxy voting.

• The EC has suggested amending the Conduct of Election Rules, 1961 to extend ETPBS for overseas electors. The rules were amended in October, 2016 to allow service voters to use ETPBS.