Scope and challenges of public health surveillance in India 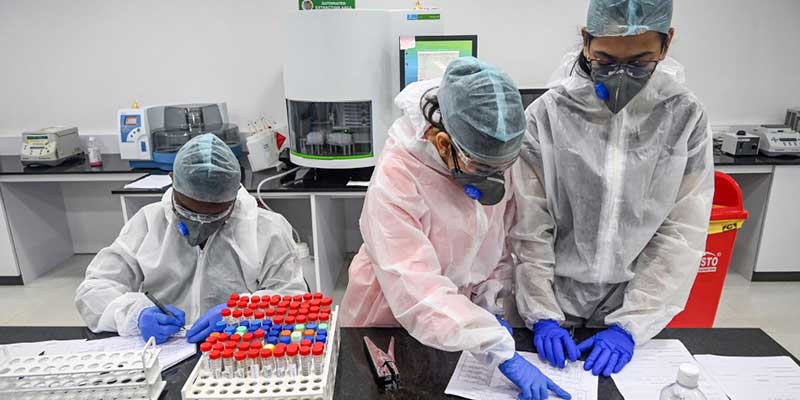 • It envisions integration within the three-tiered health system, strengthened community based surveillance, expanded referral networks and enhanced laboratory capacity. The electronic health record (EHR) will become the main basis of surveillance and is complemented by periodic national/state/district level surveys, special studies and research in order to reconcile the threshold and redefine standard definitions of cases, as disease patterns evolve.

• During the 1988 Cholera outbreak in Delhi and 1994 plague outbreak in Surat, with huge morbidity and mortality, the country sustained huge economic losses.  This prompted the central government to constitute a National Apical Advisory Committee (NAAC) in 1995 for national disease surveillance and response system.

• In 1997, the National Surveillance Programme for Communicable Diseases was launched.

• HIV Sentinel Surveillance (HSS) was perhaps one of the first nationwide disease surveillance programmes, which began in 1992 and later expanded across the country in 1998.

• The World Bank funded the Centre in 2004 for a ten year ‘Integrated Disease Surveillance Project (IDSP)’. This was later converted into a programme and funded under the 12th Five-year Plan (2012-17) within the National Health Mission.

The intent of the programme is:

• To help initiate an effective response in a timely manner.

• There is a list of more than 33 acute conditions covered under the IDSP.

• The IDSP has successfully integrated data from the Vector Borne Disease Control Programme including data on malaria, filariasis, dengue fever, Japanese encephalitis, chikungunya and Kyasanur Forest Disease among others.

• However, vertical programmes including the National AIDS Control Programme (NACP), the recently renamed National TB Elimination Programme (NTEP) and the Reproductive and Child Health (RCH) programme are not yet fully integrated into the IDSP as it took a conscious decision to focus on ‘early warning signals’ for acute conditions, leaving the large vertical national programmes to manage their own systems of surveillance.

Surveillance activities in India are organised at three levels: national, state and district.

CSU is integrated administratively and financially with the National Centre for Disease Control (NCDC), New Delhi and established by the ministry of health and family welfare for the Global Health Security Agenda (GHSA). The CSU has 14 technical centres/divisions, including epidemiology, microbiology, zoonosis, medical entomology and vector management, IDSP, Centre for AIDS and Related Diseases, biochemical and toxicology, biotechnology, parasitic diseases, malariology and coordination, occupational and environmental health, noncommunicable diseases, statistics and M&E, planning, budget and administration.

There is an SSU in each state/UT with a regular officer identified as State Surveillance Officer (SSO). The SSO is supported by seven contractual staff who include training, finance, data managers, epidemiologist, microbiologist, entomologist and a recently included veterinary consultant.

One in each district with a regular officer as District Surveillance Officer (DSO), supported by three contractual staff.

• In 2019, the World Health Organisation (WHO) in partnership with the Centre launched the Integrated Health Information Platform (IHIP) within the IDSP programme. The IHIP is a digital web-based open platform that captures individualised data in almost real-time, generates weekly and monthly reports of epidemic outbreaks and early warning signs and captures response by ‘rapid response teams’, for 33+ disease conditions.

• Other data sources capture information on diseases of national importance such as TB. TB was made a notifiable disease in 2012 and the Nikshay platform serves as a source of data to estimate burden and to track disease trends and outcomes.

The role of ICMR in health surveillance

• The Indian Council of Medical Research (ICMR) has played a key role in strengthening surveillance and research related to surveillance.

• The network of ICMR continues to expand and at present has 106 Viral Research and Diagnostic Laboratories (VRDL), 35 diagnostic centres and a number of apex institutions. Together, these institutions have played key roles in the identification of existing and new pathogens and their variants, in controlling newly emerging infections (SARS, Nipah virus, etc.) and in estimating disease burden using mathematical modelling for diseases like malaria and dengue fever.

• Over the years, these various institutions, networks and programmes have been fairly effective. Smallpox was eradicated in India in 1979, a year before its global eradication.

• India was declared ‘polio-free’ in 2014, three years after the last case detection in India in 2011. Epidemics of SARS, Nipah and rotavirus have been rapidly detected through the efficient viral research and diagnostic laboratory network of ICMR, and have been effectively controlled.

• The ICMR network is playing a critical role in the containment of the COVID-19 pandemic.

• Despite significant progress and potential for an expanded and enhanced public health surveillance system in India, there are a number of challenges that need to be addressed in the short term:

1) Implementation challenges – patchy surveillance, not comprehensive: The Integrated Health Information Platform (IHIP) is not yet fully operational across the country. There are a number of notable implementation challenges. One of the important system design issues is that data on the citizen utilisation of services for treatment of disease is separate from notification mechanisms for disease outbreaks. There is a lack of uniformity in outbreak investigation and reporting and there are limitations in geographic coverage within states.

4) Inadequate linkage of morbidity with mortality data: The Reproductive and Child Health (RCH) programme has recently begun focusing on enhancing maternal and neonatal death review to enable the identification of contributing factors and potential solutions to inform health care service deliveries and prevent future deaths. However, maternal, neonatal and child death surveillance and linking of mortality with morbidity reports is not yet fully integrated.

7) Limited use of digital, social and print media in surveillance: Social and print media are increasingly being piloted for use in surveillance. A few states in the country do have operational media scanning cells or media-advocacy initiatives that help highlight disease outbreaks, or help identify a sudden increase in hospitalisation or death due to an unusual event. These media sources can also be used to promote disease prevention and containment actions at community-level during new infectious disease outbreaks. 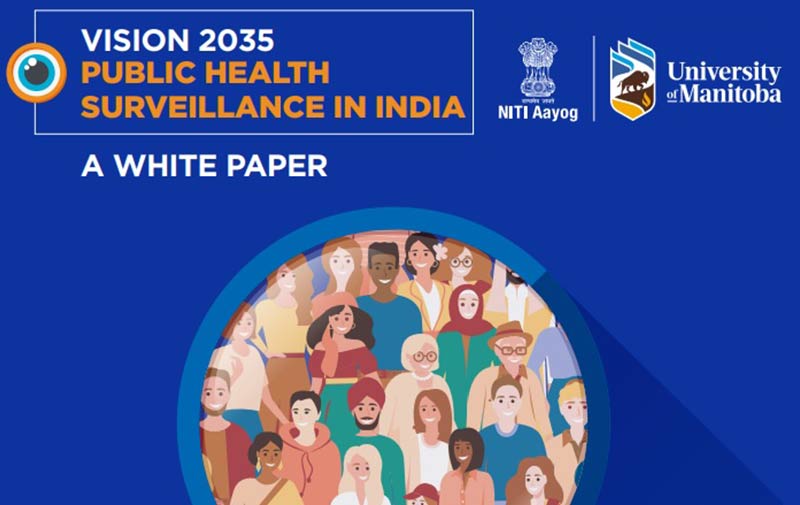 • The NITI Aayog (National Institution for Transforming India - Policy Commission) was established in 2015 by the government of India as a policy think tank. Its aim is to achieve sustainable development goals through cooperative federalism, fostering the involvement of state governments and using a bottoms-up approach.

• In 2020, the NITI Aayog signed a Letter of Agreement with the University of Manitoba in Canada to develop a working paper on a ‘Vision for Public Health Surveillance in India by 2035’.

• This vision document, which takes forward the vision as envisaged in the National Health Policy 2017, lays the foundation for integrated surveillance of both communicable and non-communicable diseases.

Four building blocks are envisaged for this vision:

1. An interdependent federated system of governance architecture between the Centre and states.

2. Enhanced use of new data collection and sharing mechanisms for surveillance based on unitised, citizen-centric comprehensive electronic health records (EHR) with a unique health identifier (UHID). Existing disease surveillance data and information from periodic surveys will complement this information. 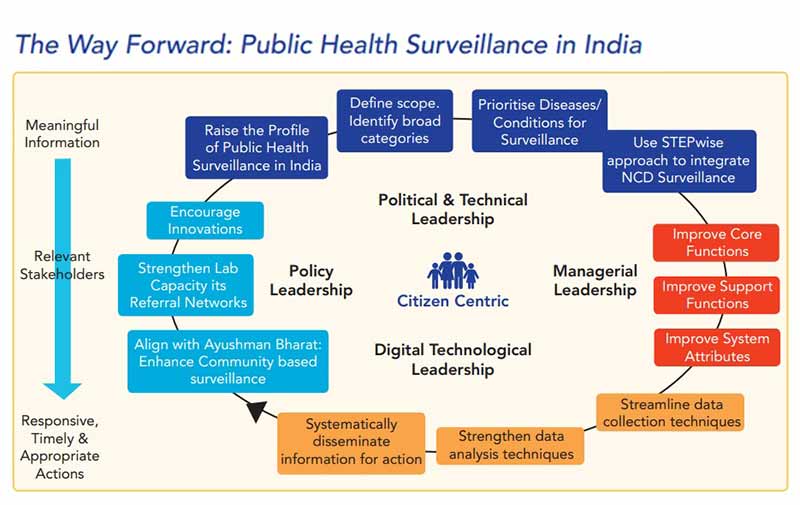 • Drawing on best practices from India and other developing and developed country experiences, the white paper suggests seven steps for India to move forward towards this vision. All these steps are in alignment with the principle to raise the profile of surveillance as a tool for the public good. The steps are suggested as a continuous cycle rather than a sequential process.

1. Establish a governance framework that is inclusive of political, policy, technical and managerial leadership at the national and state level.

2. Identify broad disease categories that will be included under public health surveillance.

3. Enhance surveillance of non-communicable diseases and conditions in a STEPwise manner.

4. Prioritise diseases that can be targeted for elimination as a public health problem, regularly.

6. Establish mechanisms to streamline data sharing, capture, analysis, and dissemination for action. These could include the use of situation-aware real-time signals from social media, mobile sensor networks, and participatory surveillance systems for event based epidemic intelligence.

The need for Surveillance Information Platform

• A Surveillance Information Platform will store, analyse, and auto-generate relevant reports for action. As well, this remains a repository for further analysis and research which will complement the available surveillance information.

• Surveillance itself functions on a single Surveillance Information Platform that amalgamates all relevant information from multiple sources. Initially, this information can come from existing vertical and integrated disease surveillance programmes.

• However, over time, this would be primarily driven from electronic health records (EHR) of populations and medical records of patients, that are individualised and identified through the use of a unique health identifier (UHID).

• In alignment with the principal of ‘one-health’ environmental health surveillance, plant and animal disease surveillance will also be integrated into this Surveillance Information Platform.

• National surveys, special studies and research will be used periodically to validate case definitions and to address gaps within the electronic health record-based surveillance.

Notes
three-tiered health system The 3-tier health care delivery system in India. 1) Primary care at health and wellness centres, sub-centres and primary health care centres. 2) Secondary care at first level referral units and district hospitals (few specialities – medicine, obstetrics & gynaecology, paediatrics and emergency care). 3) Tertiary care at medical colleges and apex institutions (all specialists and super-specialists, equipped with high level laboratories for advanced diagnostics and specialist procedures).
STEPwise The WHO STEPwise approach to Surveillance (STEPS) is a simple, standardised method for collecting, analysing and disseminating data in WHO member countries. By using the same standardised questions and protocols, all countries can use STEPS information not only for monitoring within-country trends, but also for making comparisons across countries. The approach encourages the collection of small amounts of useful information on a regular and continuing basis.
Related Topics
RELATED STORIES