From early lockdown to vaccination: Handling of pandemic in India 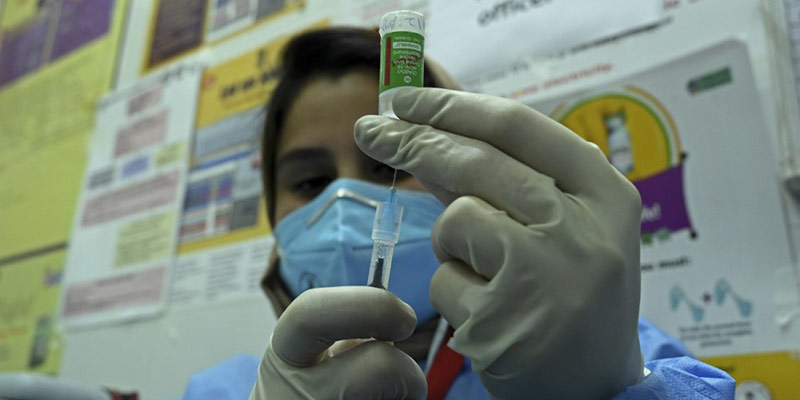 India’s COVID-19 situation has been improving for the last few months, with the number of active cases falling under two lakh for the first time in the last seven months, and still declining. The daily number of recorded deaths is at the lowest in eight months. The overall test positivity rate has also declined in the meantime, indicating that the virus transmission is slowing down on the average in the country. The weekly test positivity rate has fallen below 2 per cent continuing with a declining trend over the past weeks. 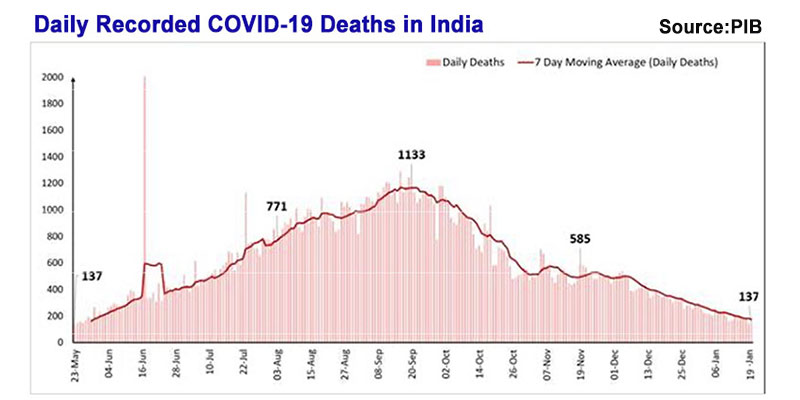 Since almost two-thirds of the active cases and half the number of daily deaths in the country are concentrated in Kerala and Maharashtra, it is expected that for the most part of the country, the worst is certainly over. A look at the distribution of daily cases shows that currently, India is at the same level of daily recorded cases as in June 2020.

It is significant, as the pandemic is raging still in most parts of the world, and India till date accounts for about 12 per cent of the global COVID-19 case load. In September, it took only 12 days for the country to move from 4 million to 5 million cases. However, in the month since mid-December, there have been only half a million new cases. 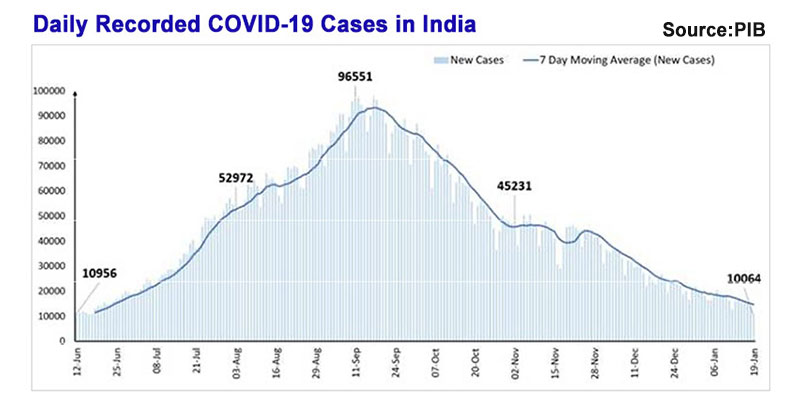 As the overall death rates have been low, and given the steady declining trend, despite having a large number of cases and deaths, both cases and deaths as proportions of population are the lowest in India amongst the high burden countries. It is likely that many asymptomatic cases are undetected, but it is borne out in the test positivity rates that India does not have an invisible pandemic raging. Similarly, even when currently unaccounted COVID-19 deaths are added, the overall comparative situation will not change much.

Apart from a handful of states namely Kerala, Nagaland, Maharashtra and Goa, the positivity rates are very low, and much below the level of 5 per cent which the World Health Organisation (WHO) suggests as the threshold to open up economies. Despite falling number of cases and deaths, India has still been testing aggressively, in view of the new strains of the virus. The latest weekly test positivity rate for India is under 2 per cent, and only 13 states and Union Territories have a rate higher than the national average. The national average is pushed up disproportionately by cases from Maharashtra and Kerala.

For most parts of the country, the pandemic is under control and on the downswing. It is expected that by March, daily cases will fall to just a few thousands. Given the known limitations and bottlenecks in the Indian health system and despite some miscalculations along the way, India has done better than expected in its handling of the pandemic. 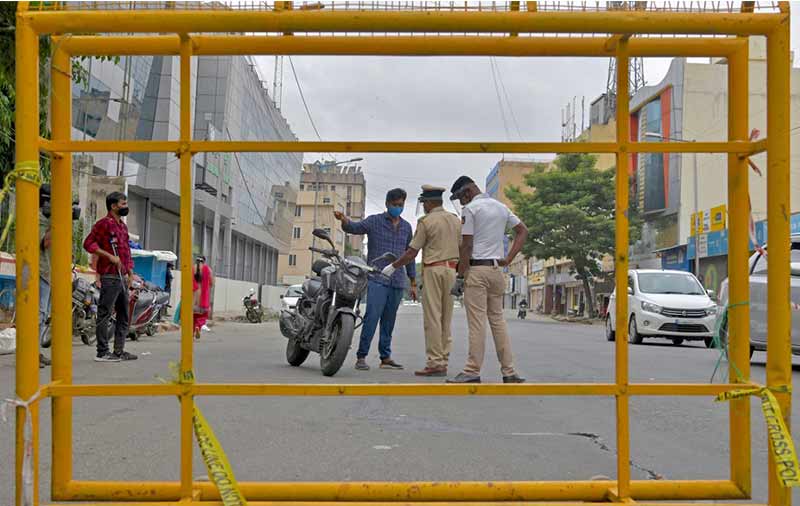 What India did right can be summarised as follows:

1) An early and decisive lockdown: The aim of the lockdown was to hit a pause button in a time of almost complete uncertainty. It helped the health system prepare better and delayed the peak. It delayed the peak till mid-September, when India was better prepared and avoided  overwhelming health system. However, it is a fact that lockdown had enormous social costs, in terms of disruption of lives and livelihoods of relatively poorer sections, who did not exactly get protected from the virus either.

2) Use of masks: Till June, even the WHO was not sure about medical evidence to support mask wearing by the public. However, large parts of India, a country with a population of 1.3 billion people, made face masks compulsory way back in April. On the other hand, countries like the UK made masks mandatory in July. Masks have clearly protected India from uncontrolled transmission.

3) Embracing rapid tests:  Often, many Indian experts have been dismissive of Rapid Antigen Tests (RATs) when the government decided to use them along with RT-PCR tests, citing the risks of false negatives. However, the WHO itself later started promoting RATs world over as an effective tool on the ground to cut transmission quickly, implicitly endorsing India’s early decision.

This year, on January 16, India started a historic vaccination campaign, and till now about one million healthcare professionals are administered the first dose of the vaccine. Vaccination of high-risk categories among the general population is to start shortly. Despite some initial missteps during the approval process of vaccines, and a case of miscommunication on Covaxin’s role in the vaccination rollout, most states are able to administer doses to a high proportion of the intended beneficiaries. However, low uptake among health professionals in states like Punjab and Tamil Nadu remains a concern, which needs to be addressed soon.

Overall, opinion surveys indicate that a majority of the Indian public is satisfied with the government’s handling of the pandemic, and over the last three months, the approval ratings have been going up. Earlier, sero-survey results had indicated that the relatively poorer parts of India had not gained many benefits from the lockdown and other non-pharmaceutical interventions, and quite a few regions had very high levels of sero-positivity. It is likely that even without vaccines, many pockets in India have already achieved herd immunity or are very close to it.

Once vaccines are administered amongst the relatively vulnerable populations, the daily number of deaths will start declining quickly. Expanding government funded vaccination beyond high-risk populations is a decision that has to be made in the light of scientific evidence. In the absence of recent sero-surveys, perhaps the existing levels of infection induced immunity can be gauged by observing the impact of potential superspreading events on case numbers. If certain events do not push up case numbers and deaths, it can perhaps be deduced that a large majority of the general population have already developed some immunity through infection. In that case, the ongoing vaccination drive should take us close to normalcy relatively early.

From early lockdown to vaccination: Handling of pandemic in India
COPY LINK