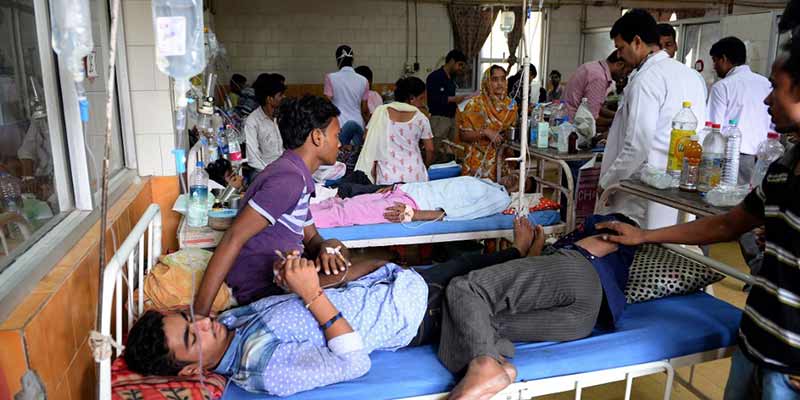 • The COVID-19 pandemic has emphasised the importance of health care, whereby a health crisis transformed into an economic and social crisis. Considering the same and in striving to achieve the Sustainable Development Goal (SDG) target of Universal Healthcare Coverage, India must take steps to improve health care accessibility and affordability in the country.

• On quality and access of health care, India was ranked 145th out of 180 countries (Global Burden of Disease Study 2016). Only a few sub-Saharan countries, some pacific islands, Nepal and Pakistan were ranked below India.

Better health care infrastructure is no insurance against communicable disease

• Better health infrastructure is no guarantee that a country would be able to deal better with devastating pandemics like COVID-19. As the next health crisis could possibly be drastically different from COVID-19, the focus must be on building the health care system generally rather than a specific focus on communicable diseases.

• This is especially pertinent given the fact that countries with much higher health care investments and concomitant health infrastructure have struggled to contain the pandemic.

• The next health crisis may not possibly involve a communicable disease. Therefore, India’s health care policy must continue focusing on its long-term health care priorities. 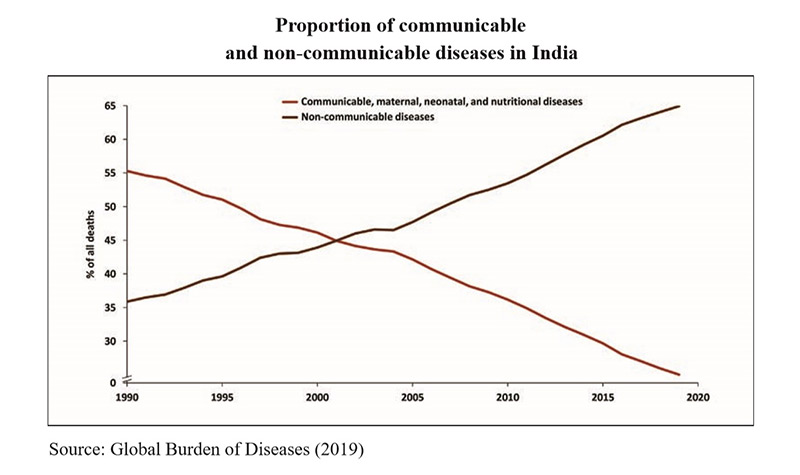 • Simultaneously, to enable India to respond to pandemics, the health infrastructure must be agile. For instance, every hospital may be equipped so that at least one ward in the hospital can be quickly modified to respond to a national health emergency while caring for the normal diseases in usual times. Research in building such health infrastructure can guide how to build such flexible wards. 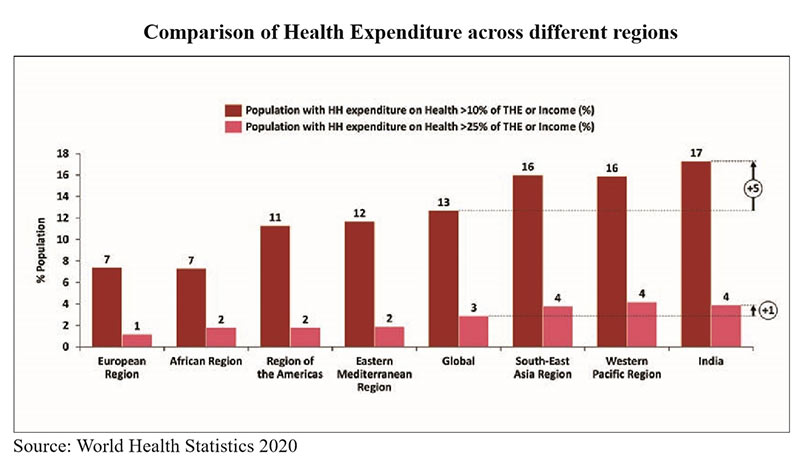 • From a financial perspective, India has one of the highest levels of out-of-pocket health expenditures in the world, contributing directly to the high incidence of catastrophic expenditures and poverty.

• Increased prioritisation of health care in the central and state budgets is important as it crucially impacts how much protection citizens get against financial hardships due to out-of-pocket payments.

• Out-of-pocket payments for health increase the risk of vulnerable groups slipping into poverty.

• However, recent data show that the distribution of the public subsidy has improved in favour of the poor, more clearly in maternity and child health care. Earlier studies have argued that public sector-based health care has been pro-rich (or aggressive). This had resulted in poor households being disproportionately impacted by out-of-pocket health expenditures and pushed below the poverty line.

• An increase in government health care spending over a decade in varied countries such as China, Indonesia, Philippines, Pakistan and Thailand significantly decreased the out-of-pocket expenditures of its citizens.

• The National Health Mission has played a critical role in mitigating inequity in health care access. The percentage of the poorest utilising prenatal care through public facilities has increased from 19.9 per cent to 24.7 per cent from 2004 to 2018. 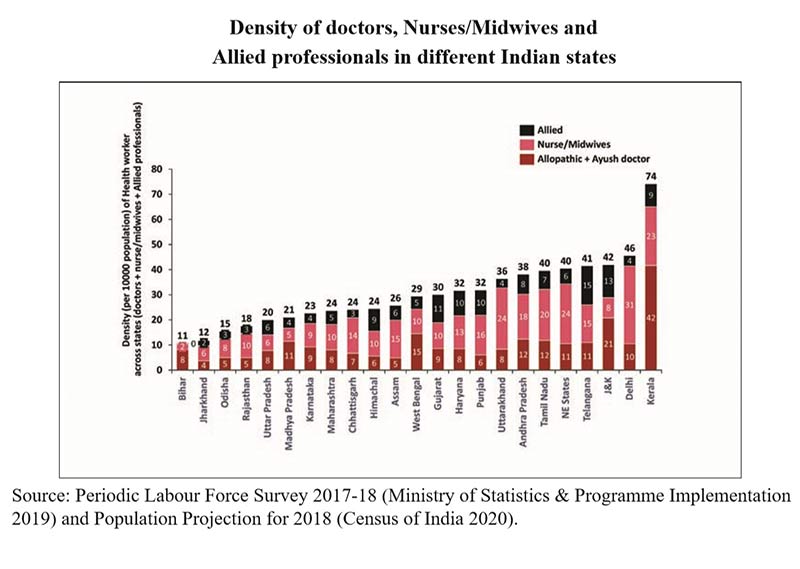 • Although aggregate human resources for health density in India is close to the lower threshold of 23, the distribution of health workforce across states is lop-sided. Also, the skill mix (doctor/nurse-midwives ratio) is far from adequate. 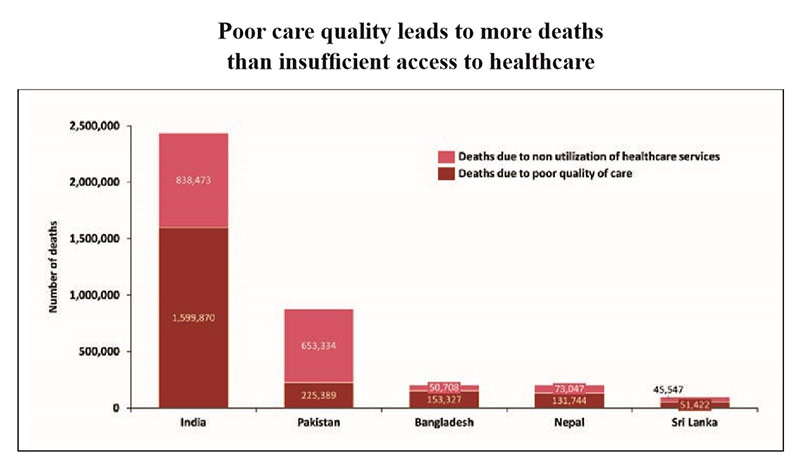 • While the share of public institutions has increased both in hospital and outpatient cares, the private sector dominates in total health care provision in India.

• Around 74 per cent of outpatient care and 65 per cent of hospitalisation care is provided through the private sector in urban India.

• Unregulated private enterprise can create significant negative effects. A large proportion of deaths in India manifests due to poor quality of health care than due to insufficient access. This proportion is significantly higher than neighbouring countries and other countries in the world.

• About 3/4th of outpatient care and 2/3rd of hospitalisation care is provided through the private sector. So, a large proportion of deaths in India manifesting due to poor quality of health care is likely to reflect that the quality of treatment in the private sector may not be significantly better than that in the public sector in India.

• Also, the costs of treatment are not only uniformly higher in the private sector, the differences are humongous for in-patient treatments of severe illnesses such as cancers (3.7x), cardio (6.8x), injuries (5.9x), gastro (6.2x), and respiratory (5.2x).

• These technology platforms coupled with digitisation and the promise of artificial intelligence at-scale, have led to a drastic uptake in the utilisation of telemedicine for primary care and mental health.

• Given India’s unique last mile challenges, such technology-enabled solutions need to be harnessed to the fullest.

• Impressive growth has been seen in the adoption of telemedicine in India since the outbreak of the COVID-19 pandemic. This coincided with the imposition of lockdown in India and the issuance of the Telemedicine Practice Guidelines 2020 by the ministry of health and family welfare (MoHFW) on March 25, 2020.

• eSanjeevani OPD (a patient-to-doctor tele-consultation system) has crossed million consultations since its launch in April 2020.

• The number of telemedicine consultations correlates strongly with the Internet penetration in a state. Thus, the success of telemedicine critically hinges on having a decent level of health infrastructure and Internet connectivity nationwide.

• Investing in Internet access, can lead to greater uptake of telemedicine, which in turn can greatly help reduce geographic disparities in health care access and utilization.

• Health care policymakers should consider creating agencies to assess the quality of the health care providers – both doctors and hospitals.

• The Quality and Outcomes Framework (QOF) introduced by the National Health Service (NHS) in the United Kingdom 2004 as well as other quality assessment practices introduced by NHS provide a good example. The NHS quality assessment practices included national standards for the major chronic diseases, annual appraisal of all doctors working in the NHS, and widespread use of clinical audits to compare practices, sometimes with public release of data. These should be evaluated carefully and considered for implementation.

• A sectoral regulator that undertakes regulation and supervision of the health care sector must be seriously considered. This is especially pertinent as regulation has grown in importance as a key lever for governments to affect the quantity, quality, safety and distribution of services in health systems.

• Similarly, data from the National Digital Health Mission can be utilised even within the framework of data privacy with the aid of artificial intelligence and machine learning algorithms to mitigate information asymmetry with respect to the patients.

• A standardised system for quality reporting on health care for hospitals, physicians and insurance companies can start with basic input indicators to be reported mandatorily by every health care stakeholder. Over time, this can evolve to cover output and outcome indicators such as infection rates and re-admission rates. A start has been made in this direction by the Niti Aayog through the Health Index at the state level. 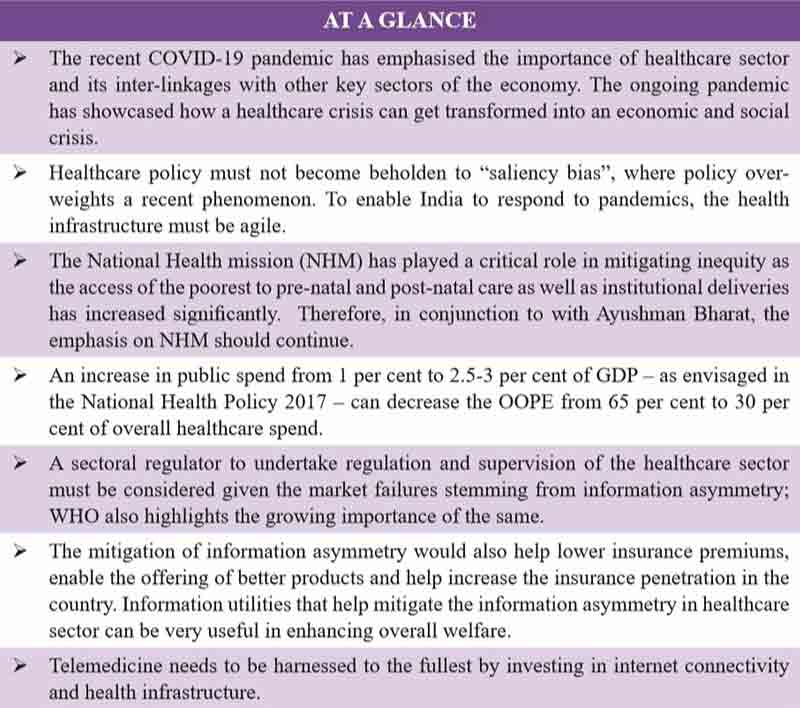