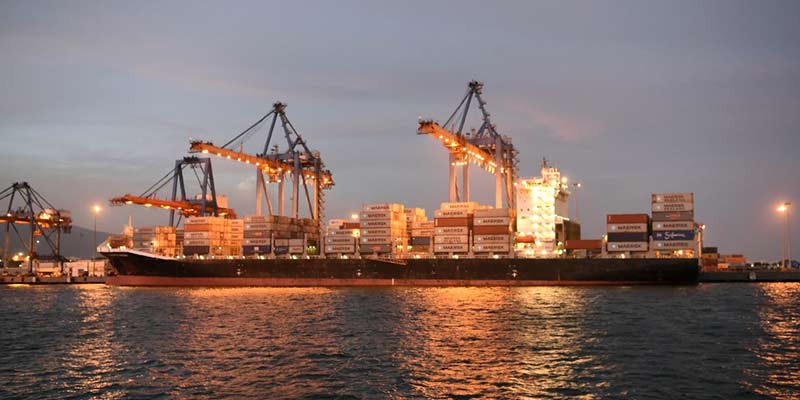 COVID-19 has affected nearly all spheres of the global economy with the spread catalysed by the increasing interconnectedness of global value chains. The resulting crisis has constituted an intense shock, with a sharp decline in global trade, lower commodity prices, tighter external financing conditions and with varying implications for current account balances and currencies. 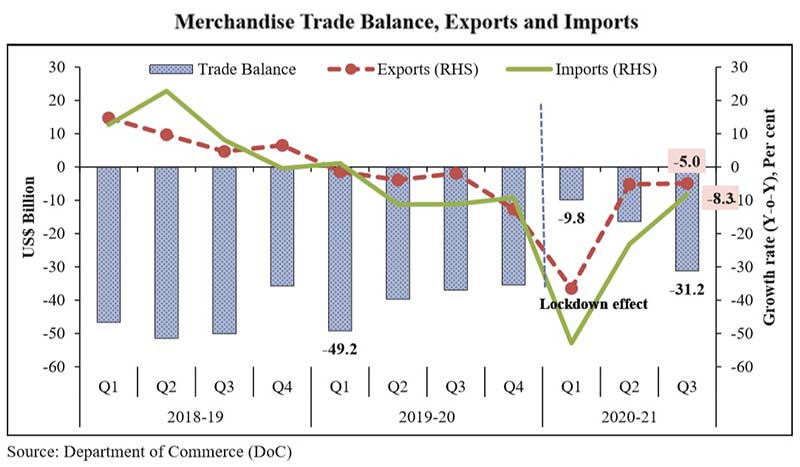 During the first quarter of FY 2020-21, India’s exports and imports saw a sharp contraction in line with the contraction in global trade. With the unlocking of the economy from June onwards, a gradual revival in India’s merchandise trade got underway. The trade deficit during April-December 2020-21 was $57.5 billion as compared to $125.9 billion in the corresponding period in FY 2019-20.

• Petroleum, Oil and Lubricants (POL) exports, which constitute about 10-15 per cent of the total exports, have contributed negatively to export performance during the period under review. The fall in POL exports was largely driven by the softening of international crude oil prices. 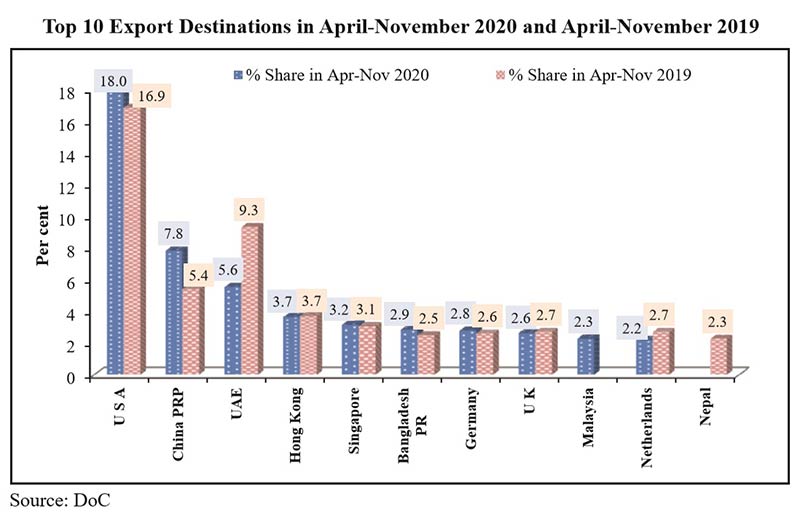 • The total imports during April-December 2020 amounted to $258.3 billion contracted by (-)29.1 per cent, as compared with (-)7.2 per cent during the same period in previous year. The sharp decline in POL imports that constitute about a quarter of total merchandise imports pulled down the overall import growth.

• Gold & silver imports, constituting about 7-9 per cent of India’s imports, witnessed a sharp growth of 33 per cent in third quarter of 2020-21 to $10 billion – primarily due to the simultaneous rise in international gold and silver prices on account of demand for bullion as a safe haven.

• Fertilizers, vegetable oil, drugs & pharmaceuticals and computer hardware & peripherals have contributed positively to the growth of non-POL, non-gold & silver imports, while capital goods contributed most to its weakness.

• Computer hardware and peripherals is one of the new additions in the list of top 10 import commodities in April-November 2020, accounting for 3 per cent of total imports driven by increased demand due to more people working from home. 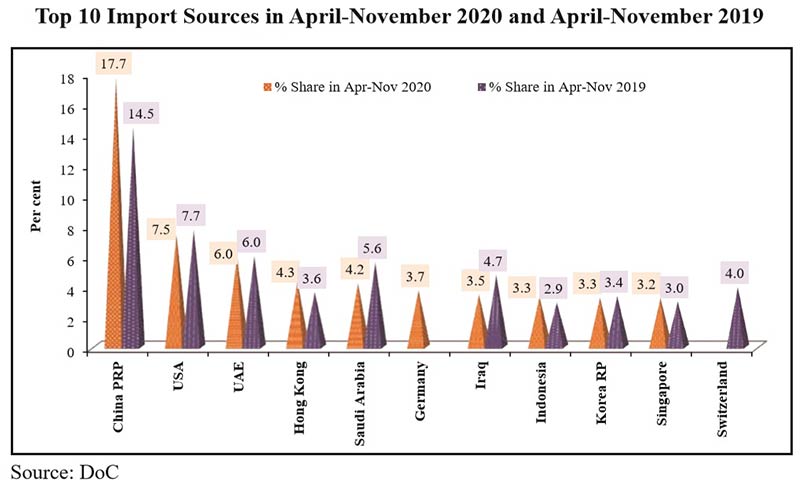 • Among the top 10 countries for import origin, China continues to be the largest import source for India in April-November 2020, with share of imports rising to 17.7 per cent, up from 14.5 per cent in April-November 2019. While Switzerland does not appear to be among the top 10 import sources, Germany is the new addition in the list accounting for 3.7 per cent share of total imports.

India’s current account deficit averaged 2.2 per cent of GDP in the last 10 years. Reversing this trend, current account balance turned into surplus (0.1 per cent of GDP) in the fourth quarter of FY 2019-20 on the back of, among others, a lower trade deficit and a sharp rise in net invisible receipts. This quarterly surplus was registered after a gap of 13 years after the fourth quarter of FY 2006-07.

In the first half of FY 2020-21, steep contraction in merchandise imports and lower outgo for travel services led to a sharper fall in current payments (by 30.8 per cent) than current receipts (15.1 per cent) – leading to a current account surplus of $34.7 billion (3.1 per cent of GDP).

Given the trend in imports of both goods and services, it is expected that India will end with an annual current account surplus of at least 2 per cent of GDP – after a period of 17 years.

The current account balance is the difference between exports and imports of goods and services.

The current account, within the balance of payments, displays the transactions between residents and non-residents of a reporting economy, involving economic values, namely the cross-national exchange of goods and services as well as cross-national transfers of primary and secondary income.

Current account deficit (CAD), a critical indicator of the macroeconomic health, represents the gap between the overall foreign exchange expended and received in the economy. CAD is recorded when expenditures exceed receipts.

India, being a developing and emerging market economy, typically runs a deficit on the current account to supplement domestic savings with foreign savings to fund higher investment.

• While improved current account balance has been a key factor for reserve accretion in first half of 2020-21, robust capital flows, particularly foreign direct investment (FDI) and foreign portfolio investment (FPI), in subsequent months largely drove foreign exchange reserves to an all-time high of $586.1 billion as on January 8, 2021, covering about 18 months of imports.

• As at end-September 2020, India is the fifth largest foreign exchange reserves holder among all countries of the world after China, Japan, Switzerland and Russia.

• India’s international financial liabilities are 210.7 per cent of foreign exchange reserves as at end-September 2020 as compared with 229.7 per cent as at end-March 2020.

• The rise in the foreign exchange reserves of the RBI has largely been due to the current account surplus which, in turn, is largely due to contraction in imports rather than increase in competitiveness of exports.

• A rise in foreign exchange reserves also represents investments in bonds/securities of other countries – in effect investing abroad.

Efforts to streamline, speed up and coordinate trade procedures will drive expansion of trade and help integrate itself with an increasingly globalised production system.

India has been at the forefront in undertaking initiatives aimed at maximising predictability and automation in trade, reflecting in the consistent improvement on the United Nations’ Global Survey on Digital and Sustainable Trade.

Remission of Duties and Taxes on Exported Products (RoDTEP)

India’s various export promotion schemes including Merchandise Exports from India Scheme (MEIS), were challenged by the United States in WTO in early 2018. The final report of the WTO panel observed that MEIS is a “prohibited subsidy” and needs to be withdrawn, against which an appeal has been filed by India.

In order to continue supporting the industry and to eliminate any uncertainty amongst the exporting community, the government has rolled out a new WTO compliant scheme, namely Remission of Duties and Taxes on Exported Products (RoDTEP), for all export goods with effect from January 1, 2021.

Under this scheme, duties and taxes levied at the central, state and local levels, such as electricity duties and VAT on fuel used for transportation, which are not getting exempted or refunded under any other existing mechanism will be refunded to exporters in their ledger account with Customs. The credits can be used to pay basic customs duty on imported goods or transferred to other importers – facilitating ease of transactions for exports.

In order to boost domestic manufacturing and exports, the Production-Linked Incentive (PLI) scheme with an outlay of Rs 1.46 lakh crore has been introduced. This scheme aims to give incentive to companies on incremental sales from products manufactured in domestic units.

The ten-identified champion sectors under PLI scheme with approved financial outlay over a five year period are:

The scheme is expected to make Indian manufacturers in these ten sectors:

• Attract investment in the areas of core competency and cutting-edge technology.

• Enhance exports and make India an integral part of the global supply chain.

It also incentivises global, capital-rich companies to set up capacities in India.

Growth in production and exports of industrial goods will greatly expose the Indian industry to foreign competition and ideas, which will help in improving its capabilities to innovate further.

Promotion of the manufacturing sector and creation of a conducive manufacturing ecosystem will not only enable integration with the global supply chains but also establish backward linkages with the MSME sector in the country. This will lead to overall growth in the economy and create huge employment opportunities.

The National Logistics Policy is in an advanced stage of roll-out with a vision to develop a modern, efficient and resilient logistics services sector that builds on dynamic processes, technology and professional manpower to seamlessly integrate multiple modes of transportation and inventory management to provide more reliable, cost effective, greener, safer and equitable logistics solutions.

Some process related reforms which have contributed towards improving logistics efficiency are:

• Reduction in waiting time for inter-state border crossing due to GST.

• Faceless assessment by ‘Turant Customs’ by Central Board of Indirect Taxes and Customs (CBIC).

• Installation of scanners at major ports.

• Radio Frequency Identification (RFID) tagging of all EXIM containers for track and trace. 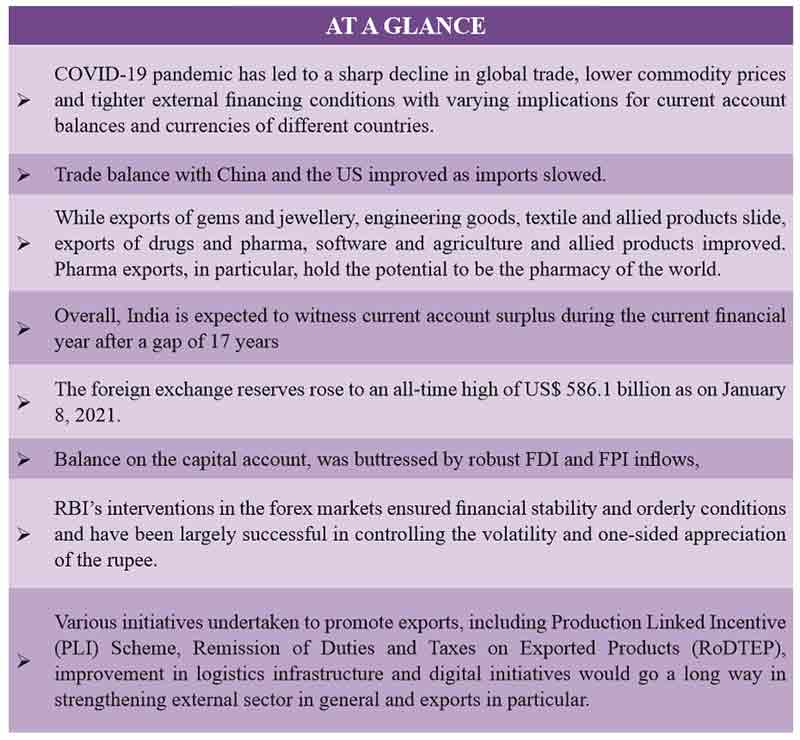 • In India, calibrated easing of lockdown restrictions narrowed contraction in both exports and imports with imports posting faster recovery leading to progressive expansion of merchandise trade deficit over the quarters of the  current year.

• A developing country like India, needs to spend on domestic investments to spur its growth. The current account surplus gives adequate space for increased expenditure on investments in FY 2021-22.

• The sustainable way for a healthy external sector balance is by enhancing the earnings through exports – which also give a boost to economic growth.

• The comfortable foreign exchange reserves give the much-needed space for enhanced domestic investments. The disruption of global manufacturing value chains due to the COVID-19 pandemic presents a tremendous opportunity for India to become one of the key nodes in the chain.

• Various export initiatives, including those aimed at promoting ease of exporting, have been undertaken by the government and RBI and implementation of these initiatives would pave the way for the sustainable export performance in India going forward.

Notes
foreign exchange reserves It is defined as external assets that are readily available to and controlled by monetary authorities for direct financing of external payments imbalances, for indirectly regulating the magnitudes of such imbalances through intervention in exchange markets to affect the currency exchange rate, and/or for other purposes. In India, the Reserve Bank of India Act, 1934 contains the enabling provisions for the Reserve Bank to act as the custodian of foreign reserves, and manage reserves with defined objectives.
Related Topics
RELATED STORIES