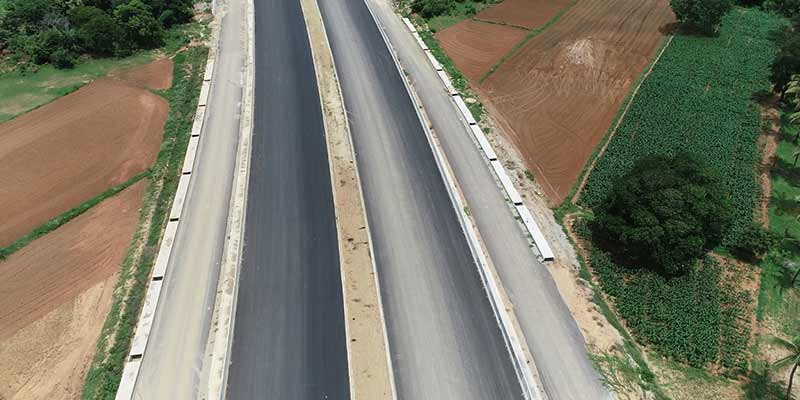 The NMP has been developed by NITI Aayog, in consultation with ministries, based on the mandate for ‘asset monetisation’ under Union Budget 2021-22.

NMP estimates aggregate monetisation potential of Rs 6 lakh crore through core assets of the central government over a four-year period — from FY 2022 to FY 2025. 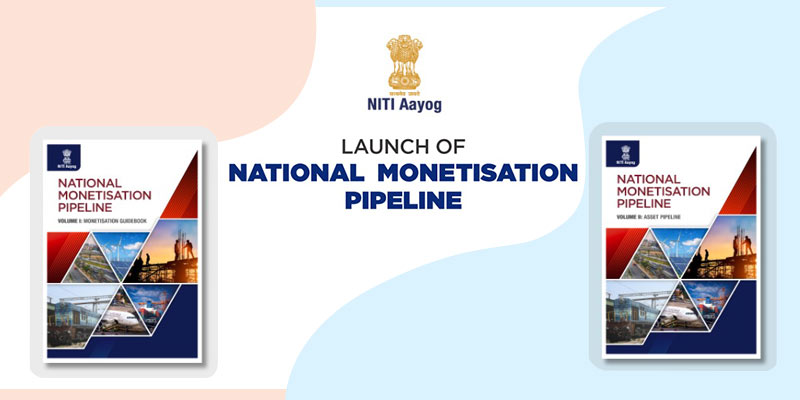 Investment in infrastructure is pivotal for accelerated and inclusive socio-economic development of a country. In the absence of adequate and robust infrastructure facilities, the economy operates at a sub-optimal level remaining distant from its potential and frontier growth trajectory.

The Union Budget 2021-22 has laid out a three-pronged strategy for enhanced and sustainable infrastructure financing in the country.

2) Thrust on monetisation of assets.

3) Enhanced share of capital expenditure in central and state budgets.

Another 40 per cent is proposed to be raised through extrabudgetary resources/ private sector investment, in form of debt from bond markets/banks/ non-banking financial companies, by way of equity from private developers/ internal accruals of PSUs and external aid from multilateral/ bilateral agencies.

Further, as estimated by the NIP task force report, about 15-17 per cent of the outlay is to be met through innovative and alternative initiatives — asset monetisation, funding through a new Development Finance Institution (DFI), etc.

Asset recycling and monetisation mechanism may finance around 5-6 per cent of the aggregate capex under NIP.

Asset monetisation, also commonly referred to as asset or capital recycling, is globally a widely used business practice. This consists of limited period transfer of performing assets (or disposing of non-strategic / underperforming assets) to unlock “idle” capital and reinvesting it in other assets or projects that deliver improved or additional benefits.

Governments and public-sector organisations, which own and operate such assets and are primarily responsible for delivering infrastructure services, can adopt this concept to meet the ever-increasing needs of the population for improved quality of public assets and service.

However, suitable structuring of such transactions is extremely critical from the perspective of public interest and service aspects.

Asset recycling and monetisation is the key to value creation in infrastructure by serving two critical objectives, unlocking value from public investment in Infrastructure and tapping private sector efficiencies in operations and management of infrastructure.

A sizeable inventory of infrastructure assets has been created over the past decade through public investments. This can now be leveraged for tapping private sector investment and efficiencies. 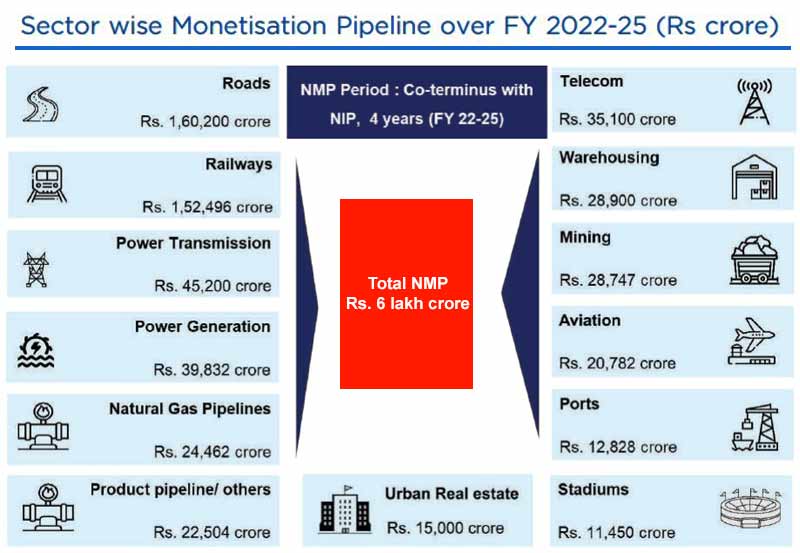 The strategic objective of the programme is to unlock the value of investments in brownfield public sector assets by tapping institutional and long-term patient capital, which can thereafter be leveraged for further public investments.

Assets which are central to the business objectives of such entity and are used for delivering infrastructure services to the public/users are considered as core assets for the purposes of monetisation. 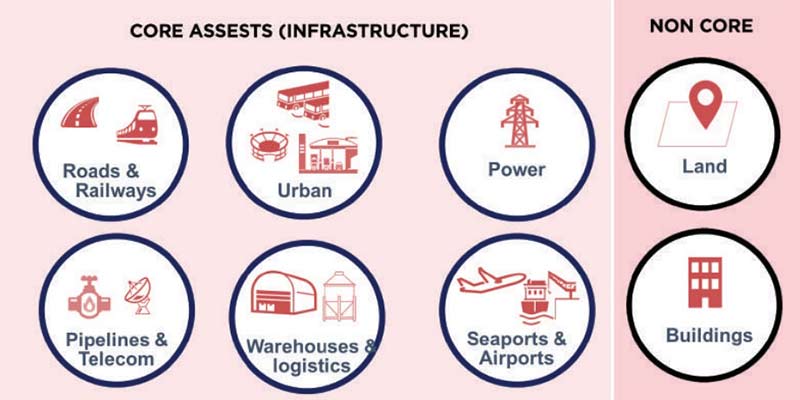 Monetisation through disinvestment and monetisation of non-core assets (such as land, building, and pure play real estate assets) have not been included in the NMP.

The total indicative value of NMP for Core Assets of central government has been estimated at Rs 6 lakh crore over the four year period.

The estimated value corresponds to 5.4 per cent of the total infrastructure investment envisaged under the NIP. 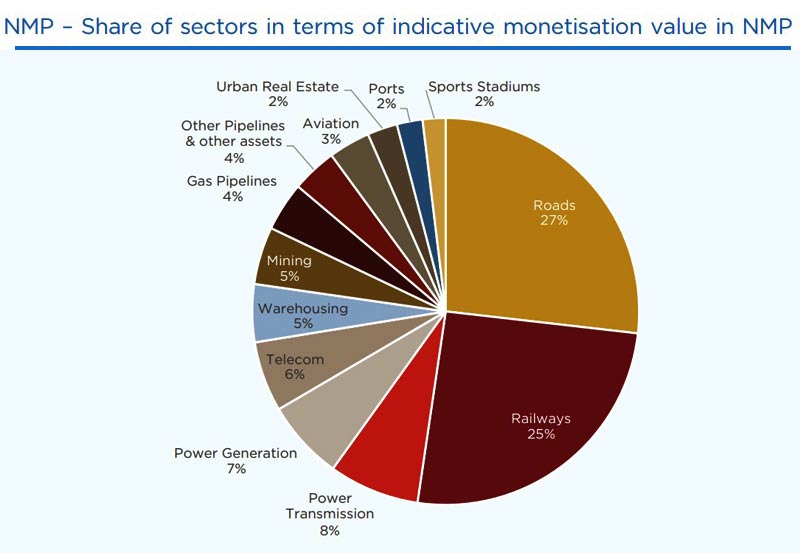 The top five sectors (by estimated value) capture 83 per cent of the aggregate pipeline value. These top 5 sectors include:

Under the ambitious NMP, the government has identified 13 sectors which could monetise their brownfield infrastructure assets.

The aggregate length of assets considered for monetisation over FY 2022 to 2025 aggregate to 26,700 km. This is based on the length of already/ to-be operational, four lane highways and above in the country, entailing potential for revenue generation and thereby monetisation.

The total length of highway assets considered for monetisation (26,700 km) constitutes around 22 per cent of the total NHs (estimated to be about 1,21,155 km) excluding the network operated by private sector under BOT (toll) based PPP concessions. 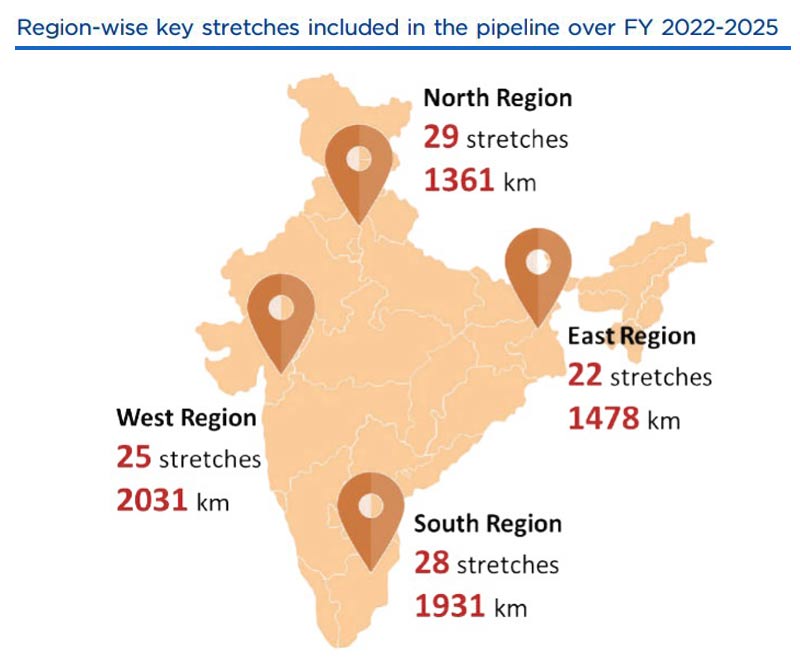 Road assets worth Rs 1.60 lakh crore will be monetised over four years till FY25.

The road assets monetisation will be implemented by the ministry of road transport and highways and the National Highways Authority of India (NHAI).

The potential models of road assets monetisation would be Toll Operate Transfer (ToT) and the InvIT (Infrastructure Investment Trust) route.

Indian Railways is the fourth-largest railway network in the world by size, with 121,407 km of total track over a 67,368 km route.

Railway is the second biggest sector, after road, identified in the ambitious national monetisation plan. Monnetisation of railways’ brownfield infrastructure assets would garner over Rs 1.52 lakh crore in four years till fiscal 2025.

Railway assets would contribute 26 per cent of the Rs 6 lakh crore NMP.

India’s economic growth hinges on rapid growth in the energy sector. Energy consumption in the country has almost doubled since 2000 and is set to grow further. This calls for huge investments in infrastructure creation and augmentation over the next few years.

As of March 31, 2019, the transmission asset base (in terms of network length) in India aggregated to a total length of 4,13,407 circuit kilometre (ckm), growing at a healthy CAGR of 7 per cent since 2015. The shares of the Centre, States and private sector in the overall length of the transmission lines were 38 per cent, 54 per cent, and 8 per cent, respectively.

The government aims to garner over Rs 45,200 crore through monetising power transmission assets.

The transmission assets considered for monetisation during FY 2022-25 aggregate to 28,608 circuit (ckt) kms.

These include transmission assets of 400 KV and above of Power Grid Corporation of India Limited (PGCIL). 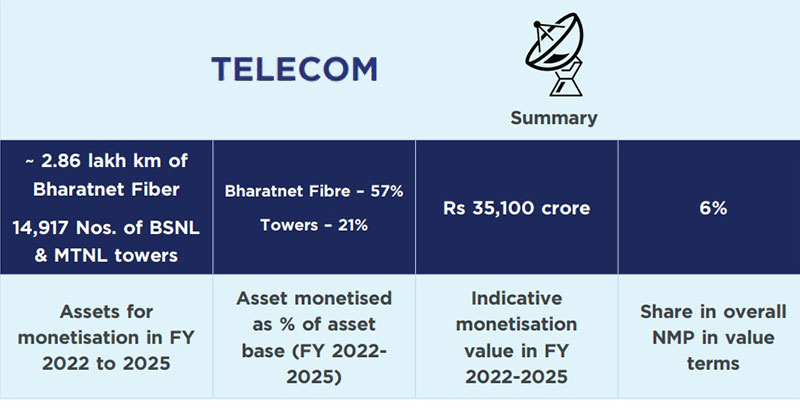 BSNL currently has 68,000 towers of which 13,567 towers have co-locations from third party telecom operators. With more than 70 per cent of BSNL towers fiberised, the tower infrastructure is amenable for 4G and 5G deployments.

About 2,86,255 km of existing fibre assets of BBNL and BSNL, laid under the Bharatnet project spanning over 16 states has been considered for monetisation through PPP mode.

As many as 14,900 towers (13,567 towers of BSNL and 1,350 towers of MTNL) with co-locations from third party telecom operators have been considered for monetisation.

Bharatnet is a flagship project of the government of India, funded by Universal Service Obligation Fund (USOF), with an aim to provide high speed broadband connectivity to all Gram Panchayats and extension to their villages across India. The network infrastructure under the Bharatnet project is a national asset and accessible on a non-discriminatory basis to all eligible service providers to enable them to provide services in rural areas.

The government expects to realise Rs 35,100 crore through monetisation.

The energy use is projected to grow rapidly to fuel economic development, urbanisation and improved electricity access. India’s growing per capita consumption of energy, calls for huge investments in the sector for installation of new capacities and upgradation of existing ones.

Bulk of this capacity is coal and gas based. Based on estimates, the share of central sector agencies according to the nature of fuel is as follows:

The government aims to garner Rs 39,832 crore through monetisation.

The assets considered for monetisation aggregate to 6 GW. Out of which, about 3.5 GW is from hydel assets and about 2.5 GW is renewable energy assets which includes solar and wind.

India is the third-largest global energy consumer, after China and the US. India’s primary energy requirement is met through a mix of oil and coal, with natural gas forming a 6 per cent share of the energy mix. As part of its environmental agenda, the government aims to increase the share of gas to 15 per cent by 2030.

The gas pipeline infrastructure has facilitated widespread industrialisation and has brought significant socio-economic changes to different parts of the country.

The operational network of natural gas pipelines in India spans about 16,900 km with a design capacity of 400 million metric standard cubic meters per day (MMSCMD). An additional 18,363 km of natural gas pipeline network is approved/under construction. Hence, the natural gas grid of India is estimated to expand to 35,263 km in the next three to five years. 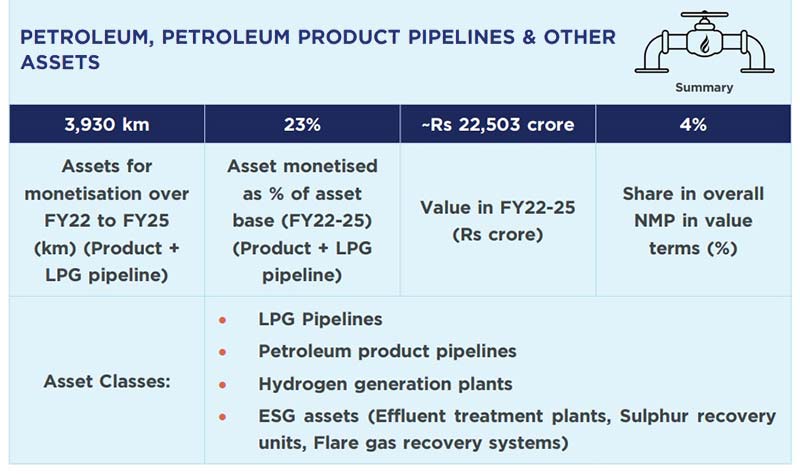 The operational product and LPG pipelines in India are 17,432 km, including:

The government aims to garner Rs 22,503 crore crore through monetisation. 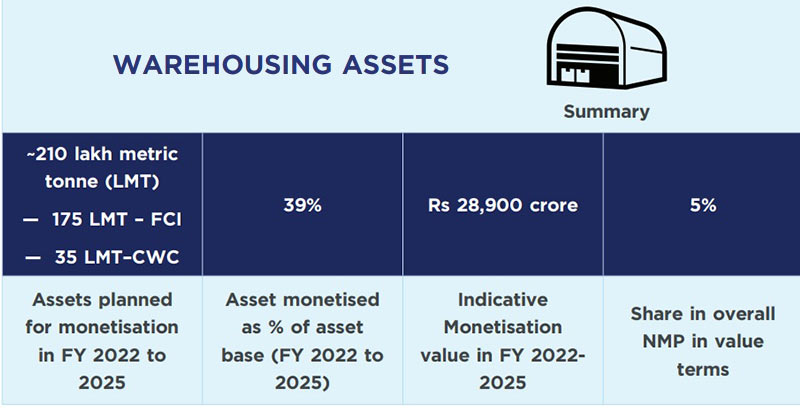 The potential asset base considered for monetisation under warehousing assets consists of storage depots, warehouses under the central sector agencies, Food Corporation of India (FCI) and Central Warehousing Corporation (CWC), with both entities operating under the aegis of Department of Food & Public Distribution.

Existing storage capacity with FCI and other agencies for central pool stocks as on April 1, 2020 is 755 Lakh Metric Tonne (LMT). Out of this, 412 LMT is available with FCI and 343 LMT with the state agencies.

Out of the FCI available asset base, about 175 LMT will be monetised.

Out of CWC’s entire capacity, about 35 LMT will be monetised.

The Centre plans to monetise warehousing assets owned by FCI and CWC for an estimated Rs 28,900 crore.

As per CIL (Coal India Limited) demand for coal was estimated at 1,000 MT for FY 2020, whereas the indigenous availability was estimated at 811 MT. The gap of 189 MT was projected to be met through imports.

The ministry of coal has identified more than 160 projects for private-sector participation towards improving efficiency as well as scaling up production.

About 761 mineral blocks are expected to be put on auction.

The total indicative value of assets considered for monetisation is estimated at Rs 28,747 crore.

India has seen massive growth in the airport sector with investments from both the government and private sector. The country has become the third-largest domestic civil aviation market in the world and has immense potential to grow further.

As many as 25 AAI airports have been considered for asset monetisation.

The total value of assets considered for monetisation is estimated at Rs 20,782 crore.

India comprises a significant size maritime sector with 12 major and over 200 non-major ports situated along its 7,500 km long coastline and a vast network of navigable waterways. The country’s maritime sector plays a crucial role in its overall trade and growth, with 95 per cent of the country’s trade volume and 65 per cent of the trade value being undertaken through maritime transport.

The assets considered for monetisation are spread across 9 of the 12 major ports. Towards this, 31 projects have been identified for private sector participation for improved operational efficiency and capacity utilisation of existing port assets.

The total estimated capex towards 31 identified projects considered for monetisation is estimated at Rs 14,483 crore.

The total potential asset base considered are the assets under the Sports Authority of India (SAI) under the aegis of the ministry of youth affairs & sports.

The mode of monetisation for the identified assets will be Public Private Partnership (PPP)-based concessions on Operations, Management and Development Agreement (OMDA) model.

The indicative monetisation value of these two national stadiums and two regional centres will be Rs 11,450 crore.

During the NMP period, projects pertaining to redevelopment of colonies in New Delhi  are being envisaged. PPP based model is recommended for redevelopment of such General Pool Residential Accommodation (GPRA) projects.

The total estimated investment on redevelopment of these seven colonies is Rs 32,276 crore

The government has also identified development of housing/commercial units on 240 acre land in Ghitorni in the national capital.

Eight hotels of ITDC will also be monetised through different routes.

Successful implementation of NMP hinges on an effective governance framework with escalation matrix for real time monitoring of progress. This will help all stakeholders in monitoring the implementation of projects by comparing actual progress in comparison with planned pipeline for the NMP assets.

The programme is envisaged to be supported through necessary policy and regulatory interventions by the government in order to ensure an efficient and effective process of asset monetisation.

The assets and transactions identified under the NMP are expected to be rolled out through a range of instruments. These include direct contractual instruments such as public private partnership concessions and capital market instruments such as Infrastructure Investment Trusts (InvIT) among others.

The choice of instrument will be determined by the sector, nature of asset, timing of transactions (including market considerations), target investor profile and the level of operational/investment control envisaged to be retained by the asset owner etc.

As an overall strategy, a significant share of the asset base will remain with the government.