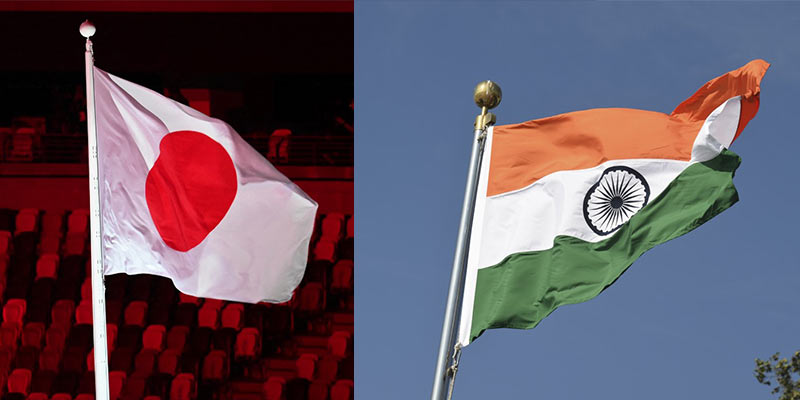 India is planning to hold a series of events throughout 2022 to mark the 70th anniversary of the establishment of diplomatic ties with Japan.

The events will include cultural activities, exhibitions and seminars, covering diverse areas of India-Japan bilateral relations.

These events will mark the occasion in a manner that truly reflects its significance and the commitment of all stakeholders to realise the full potential of the India-Japan special strategic and global partnership.

To mark the historic occasion, the two countries had decided to have special logos. The Japanese side launched its logo in August and the MEA unveiled the same on January 4. The logo depicts a peacock and a green pheasant, which are national birds of India and Japan respectively.

• Following World War II, India did not attend the San Francisco Conference in 1945 but decided to conclude a separate peace treaty with Japan in 1952 after its sovereignty was fully restored, marking a defining moment in the bilateral relations and setting the tone for the future.

• In 1991, Japan was among the few countries that bailed India out of the balance of payment crisis.

• The visit of the Japanese PM Yoshiro Mori to India in 2000 led to a significant and qualitative shift in India-Japan relations with the establishment of the ‘Global Partnership’ between the two sides. The transformation of ties with Japan were provided further fillip by the decision to have annual summits between the prime ministers commencing 2006 when both sides established ‘Strategic and Global Partnership’.

• In 2014, both sides upgraded bilateral relations to ‘Special Strategic and Global Partnership’.

• Japan has been extending bilateral loan and grant assistance to India since 1958 and is the largest bilateral donor for India.

• In view of synergies and complementarities between the two nations, India-Japan Digital Partnership (I-JDP) was launched in October 2018 furthering existing areas of cooperation as well as new initiatives.

• On the economic front, Japan continues to be a key partner in India’s growth and socioeconomic development. In the recent past, the India Japan relationship has transformed to a partnership of great substance and purpose. Japan’s interest in India is increasing due to a variety of reasons including India’s large and growing market and its resources, especially the human resources.

• In the financial year 2019-20, Japanese Foreign Direct Investment (FDI) was $3.23 billion. Cumulative investment since 2000 has been $33.49 billion, ranking Japan fourth among major investors.

• In September 2020, the two countries signed the Agreement on Reciprocal Provision of Supplies and Services between the Self-Defence Forces of Japan and the Indian Armed Forces (so called “Acquisition and Cross-Servicing Agreement” or ACSA). The agreement will help in enhancing cooperation in the areas of maritime security and maritime domain awareness.

• India and Japan are part of the Quad, or the Quadrilateral Security Dialogue. It is an informal grouping of four countries — Australia, India, Japan and the United States.