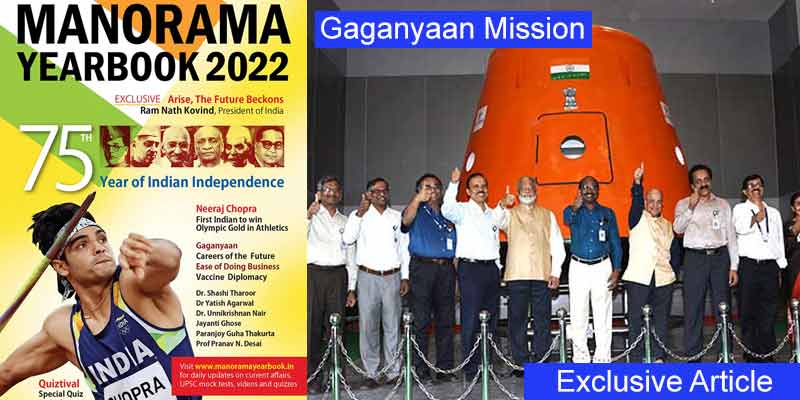 The Indian Space Research Organisation (ISRO) is gearing up for the country’s first manned mission to space — Gaganyaan.

He has written about details of the Crew Module (CM), including the landing choices, Crew Escape system, and survival packets for each crew member. The CM would be splashing down near the Indian coast after the week-long mission, and the Arabian Sea, which is comparatively calmer, is the primary choice, but Bay of Bengal is also being considered as a backup option.

Excerpt from the article.

The Gaganyaan Orbital module has two parts — the Crew module (CM) and the Service module (SM) and weighs about 8,000 kg.

While in orbit, the OM will be orbiting the Earth with a velocity of about 7,800 m/s. After the orbital phase of flight, the OM will be re-oriented for re-entry to Earth and it will be de-orbited by firing the liquid propellant thrusters in the Service module.

The CM is a double walled structure and is the habitat of astronauts. The CM is designed to re-enter the Earth’s atmosphere and has an ablative thermal protection system (TPS) to protect it during the intense aerodynamic heating during flight through the atmosphere.

An ablating TPS mitigates the incoming heat through phase changes, chemical reactions and material removal. During re-entry, the temperature on the external surface of the CM can reach as high as 1600°C.

The TPS will ensure that the substrate temperature is not exceeding 120°C under the worst case scenario. The temperature inside the crew cabin will be maintained at comfortable levels by the thermal control system.

After de-orbiting, the CM will be separated from OM and it will be continuously maintained in the required orientation through the closed loop navigation, guidance and control system. In a controlled manner, the CM will re-enter the Earth’s atmosphere. The CM has a cluster of small thrusters with 100N thrust level based on green propulsion that will be fired in controlled manner to change the attitude of CM during the re-entry and atmospheric phases of flight.

By virtue of its orbital height and velocity, the OM possesses a huge amount of energy. More than 99 per cent of CM energy will be dissipated through aerobraking while travelling through the atmosphere. Remaining energy will be killed by deploying a two stage parachute system. The parachutes will reduce the CM speed to less than 8 m/s at splashdown in sea.

The CM will be splashing down in the sea near the Indian coast. The Arabian sea is comparatively calmer and is the primary choice for landing. As back up, landing option in Bay of Bengal also will be considered.

After landing, the coordinates of CM will be passed on to the recovery team waiting in ships. The recovery team will approach the CM and the crew will be recovered. There will be redundant communication and locating systems for easy recovery of crew from sea.

The CM has a survival packet for each crew that can support them for nearly two days, however the crew will be recovered in nominal conditions within two hours after the splash down.

The astronaut training is a crucial part of any human space flight mission. The crew will be familiarised with all conceivable situations that can happen while in flight and they will be trained to face such situations.

The training will include class room sessions on different engineering, medical and safety aspects of the mission. The crew will undergo training in weightlessness condition by flying in special aircraft through a parabolic path that will give 25 to 30 seconds of weightlessness duration.

In order to familiarise the crew with rescue under abort conditions, they will undergo special survival training in sea, snow, mountain range, desert, etc.

They will be taught to survive in such situations by making use of the survival kit available with them. The crew will also undergo long duration training in special simulators that will mimic the interior of the Crew Module. The training will address how quickly they can don and doff the flight suit, how to manually intervene under emergency situations to resolve the issue.

For Gaganyaan, the selected four astronaut candidates have undergone generic space flight training in Russia for about 15 months. The Gaganyaan specific training will be carried out in India at the Astronaut Training Facility being set up in Bengaluru.