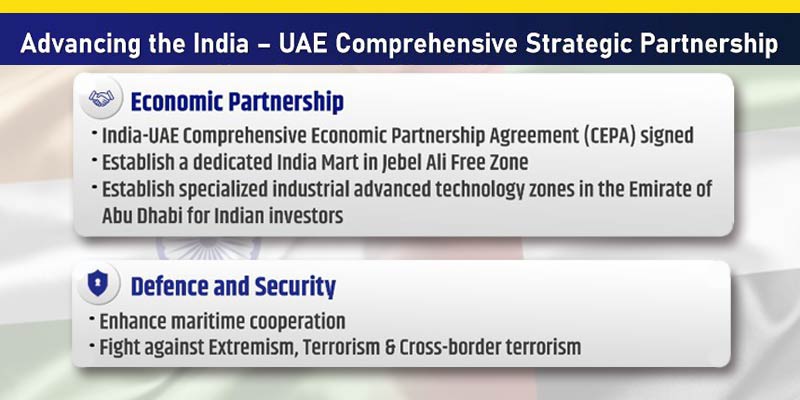 The agreement will provide significant benefits to businesses from both sides including enhanced market access and reduced tariffs and the pact is expected to increase bilateral trade from the current $60 billion to $100 billion in the next five years.

Another highlight of the virtual summit was the unveiling of a joint vision statement titled ‘Advancing India and UAE Comprehensive Strategic Partnership: New Frontiers, New Milestone’ that seeks to significantly enhance overall cooperation.

The two Leaders also released Joint Commemorative Stamp on the occasion of the 75th anniversary of India’s independence and 50th year of UAE’s foundation.

Two MoUs signed between Indian and UAE entities were also announced during the Summit. These are: 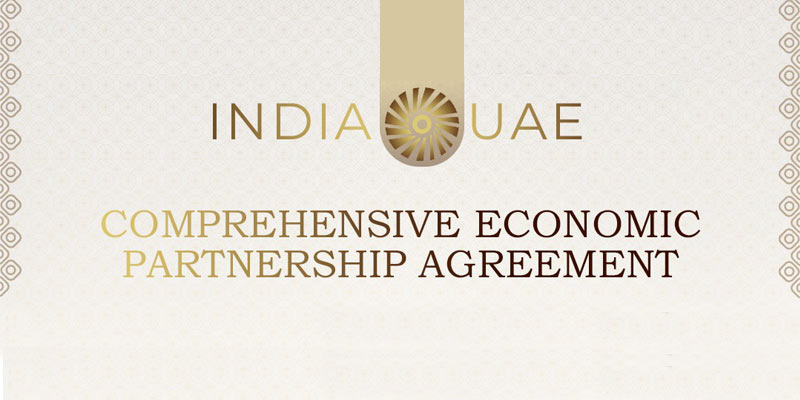 • The Agreement will provide significant benefits to Indian and UAE businesses, including enhanced market access and reduced tariffs. It is expected that the CEPA will lead to an increase in bilateral trade from the current $60 billion to $100 billion in the next five years.

• The agreement will provide significant benefits to Indian and UAE businesses, including enhanced market access and reduced tariffs.

• CEPA is expected to help in unlocking new trade routes between Africa and Asia.

• About 90 per cent of the Indian exports, in terms of value, to the UAE will get market access at zero duty from day one of the entry into force of the agreement.

• Zero duty will be applicable within five to 10 years on an additional 9 per cent of the trade value for products such as electronic goods, chemicals and petrochemicals, articles of stone, cement, ceramics and machinery.

• For the first time in a trade agreement, a separate annexe on pharmaceuticals has been incorporated to facilitate access to Indian pharmaceutical products.

• CEPA is likely to benefit about $26 billion worth of Indian products that are currently subjected to five per cent import duty by the UAE.

• In the services sector, the UAE has offered 111 sub-sectors to India as compared to 100 sub-sectors by India to the UAE.

• The CEPA will also provide a platform for SMEs in both countries to expand internationally by granting them access to new customers, networks, and avenues of collaboration. 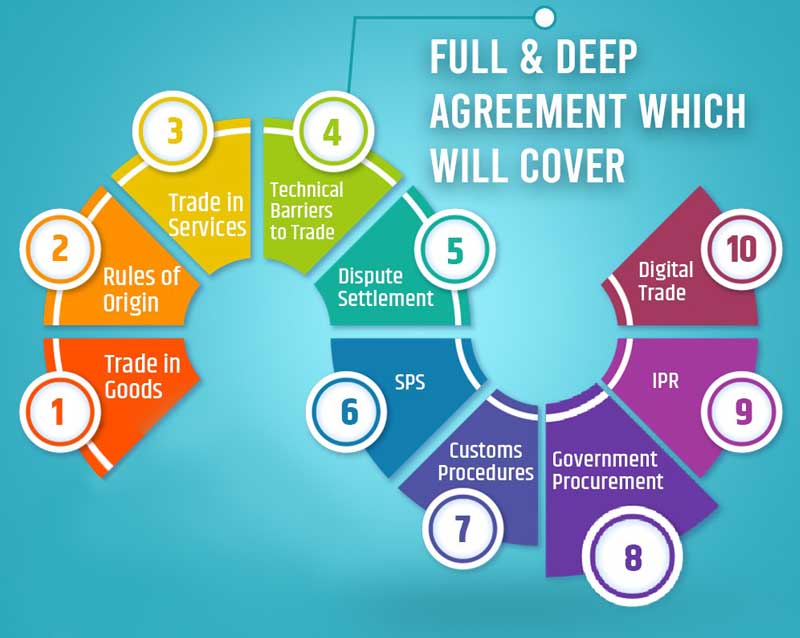 CEPA with other countries

• CEPA between India and South Korea was signed in August 2009 which came into force from January 1, 2010. The two sides have commenced negotiations for the upgradation of CEPA.

• CEPA between India and Japan was signed in February 2011 which came into force in August 2011. India has requested Japan to initiate the process of review of the Agreement to ascertain mutual gain to both the countries.

• India and Bangladesh are engaged in strengthening the trade relations by exploring prospects of entering into a bilateral CEPA covering goods, services and investment.

• In 2010, Canada and India launched negotiations toward a Comprehensive Economic Partnership Agreement (CEPA). So far, 10 rounds of negotiations have been held, with the last round held in New Delhi in August 2017 followed by an inter-session meeting held in February 2018.

• Acknowledging 50 years of strong bilateral ties, both leaders agreed on a Roadmap for a future-looking partnership between the UAE and India, strengthening the ‘Comprehensive Strategic Partnership’ with opportunities for greater depth and breadth of cooperation.

• The Roadmap will ensure that the two countries work together even more closely to address the shared global challenges, achieve shared objectives and build a robust and resilient relationship that is future ready.

• The Roadmap will promote the development of new trade, investment, and innovation dynamics, and intensify bilateral engagement in diverse areas.

• The leaders agreed to enhance maritime cooperation contributing to maintenance of peace and security in the region. They agreed to continue defence exchanges, sharing of experiences, training and capacity building.

• The leaders welcomed the establishment of a dedicated India Mart in Jebel Ali Free Zone and directed their respective officials to further promote two-way investments in infrastructure projects, including expediting work on establishing a dedicated investment zone for UAE companies and joint ventures which would focus on establishing a food corridor.

• They agreed to set up an India–UAE Cultural Council to facilitate and promote cross- cultural exchanges, cultural projects, exhibitions and dialogue between thought leaders of the two countries.

• Strategic ties between the two nations have strengthened in recent years, particularly in the field of energy. The UAE is one of India’s key energy providers and remains committed to meeting India’s growing energy demand and is proud to have been the first international partner to invest by way of crude oil in India’s Strategic Petroleum Reserves Programme.

• They agreed to expand cooperation through enhanced bilateral food and agriculture trade and responsible foreign investments in agriculture and food systems.

• Both countries agreed to establish a joint Hydrogen Task Force to help scale up technologies, with a special focus on the production of green hydrogen.

• Both sides will collaborate in research, production and development of reliable supply chains for vaccines and to enhance investments by UAE entities in the rapidly growing health infrastructure in India.

• India and UAE will contribute to promoting and strengthening the infrastructure and dedicated logistic services connecting farms to ports to final destinations in the UAE.