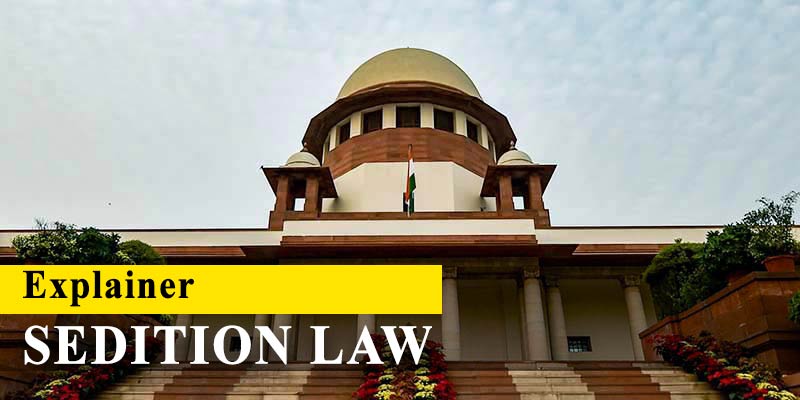 The Supreme Court stayed all proceedings in sedition cases and directed the Centre and states to not register any fresh FIR invoking sedition charges until the government re-examines the colonial-era penal law.

A bench headed by Chief Justice N.V. Ramana said all pending cases, appeals and proceedings with respect to charges framed for sedition should be kept in abeyance.

The top court has been hearing a clutch of pleas challenging the validity of the law on sedition which has been under intense public scrutiny.

The Supreme Court fixed the hearing pleas for the third week of July. By then, the Centre would have the time to undertake the exercise to re-examine the provision.

• The offence of sedition is provided under Section 124A of the Indian Penal Code (IPC).

• It states: Whoever, by words, either spoken or written, or by signs, or by visible representation, or otherwise, brings or attempts to bring into hatred or contempt, or excites or attempts to excite disaffection towards the government established by law shall be punished with imprisonment for life, to which fine may be added.

• Sedition is a non-bailable offence. Punishment under the law varies from imprisonment up to three years to a life term and fine

• Section 124A of the IPC was extensively used to curb political dissent in India. In 1891, Jogendra Chandra Bose was charged with sedition for criticising the Age of Consent Bill and the negative economic impact of British colonialism.

• Bal Gangadhar Tilak was accused of sedition for publishing an article in newspaper Kesari invoking the example of the Maratha warrior Shivaji to incite the overthrow of British rule.

• Mahatma Gandhi was jailed under the charges of sedition. Gandhiji was arrested by the British police for writing  articles in his weekly journal Young India.

• The constitutional validity of section 124A IPC came to be challenged in the case of Kedar Nath Singh vs State of Bihar.

• In 1962, the Constitution Bench of the Supreme Court upheld the validity of the sedition law.

• The Court drew a line between the terms, ‘the government established by law’ and the persons for the time being engaged in carrying on the administration observing:

• The issue of revisiting ‘sedition’ has been taken up by the Law Commission in its reports. The Commission, in its 39th Report (1968) titled ‘The Punishment of Imprisonment for Life under the Indian Penal Code’ recommended that there are certain extremely anomalous situations where certain offences have been made punishable with severe punishment.

• The 267th Report of the Commission on Hate Speech (2017) distinguished between sedition and hate speech, providing that the offence of hate speech affects the state indirectly by disturbing public tranquillity, while sedition is directly an offence against the state.

• The report adds, that to qualify as sedition, the impugned expression must threaten the sovereignty and integrity of India and the security of the state.

Attempts to amend the law

• In 2011, a private member Bill titled the Indian Penal Code (Amendment) Bill, was introduced in the Rajya Sabha by CPI leader D. Raja. The Bill proposed that Section 124A IPC should be omitted. It was reasoned that the British government used this law to oppress the view, speech and criticism against British rule. But the law is still being used in independent India, despite having specialised laws to deal with the internal and external threats to destabilise the nation. Thus, to check the misuse of the section and to promote the freedom of speech and expression, the section should be omitted.

• In 2015, Congress MP Shashi Tharoor proposed an amendment that only those actions / words that directly result in the use of violence or incitement to violence should be termed seditious.

Sedition in other countries

• The global trend has largely been against sedition and in favour of free speech.

• The UK abolished sedition laws in 2009 citing that the country did not want to be quoted as an example of using such draconian laws.

• Despite the conflicting views and the attempts by courts to narrow the scope of sedition, it survives as an offence in the US, though it is very narrowly construed and can even be said to have fallen into disuse.

• The recommendation of Australian Law Reform Commission was implemented in the National Security Legislation Amendment Act 2010 wherein the term ‘sedition’ was removed and replaced with references to ‘urging violence offences’.

Freedom of speech vs sedition

• Free speech is one of the most significant principles of democracy. The purpose of this freedom is to allow an individual to attain self-fulfilment, assist in the discovery of truth, strengthen the capacity of a person to take decisions and facilitate a balance between stability and social change.

• The Universal Declaration of Human Rights, 1948, in its Preamble and Article 19 declared freedom of speech as a basic fundamental right.

• Article 19(1)(a) of the Constitution of India guarantees freedom of speech and expression to all citizens.

• However, this freedom is subjected to certain restrictions namely, interests of the sovereignty and integrity of India, the security of the state, friendly relations with foreign states, public order, decency or morality or in relation to contempt of court, defamation or incitement to an offence.

• The relevance of Section 124A in an independent and democratic nation is the subject of continuous debate. Those opposing it see this provision as a relic of colonial legacy and thereby unsuited in a democracy. There is an apprehension that this provision might be misused by the government to suppress dissent.

• It is argued that amid growing concerns of national security, this Section provides a reasonable restriction on utterances that are inimical to the security and integrity of the nation.

• Balancing freedom of expression with collective national interest is one of the key ingredients of this law. Though it is argued that this law is a colonial vestige, Indian courts have upheld its constitutionality.

• In its consultation paper in 2018, the Law Commission said: “Berating the country or a particular aspect of it cannot and should not be treated as sedition. If the country is not open to positive criticism, there lies little difference between the pre- and post-independence eras. Right to criticise one’s own history and the right to offend are protected under free speech.”

“While it is essential to protect national integrity, it should not be misused as a tool to curb free speech. Dissent and criticism are essential ingredients of a robust public debate on policy issues as part of a vibrant democracy. Therefore, every restriction on free speech and expression must be carefully scrutinised to avoid unwarranted restrictions.”