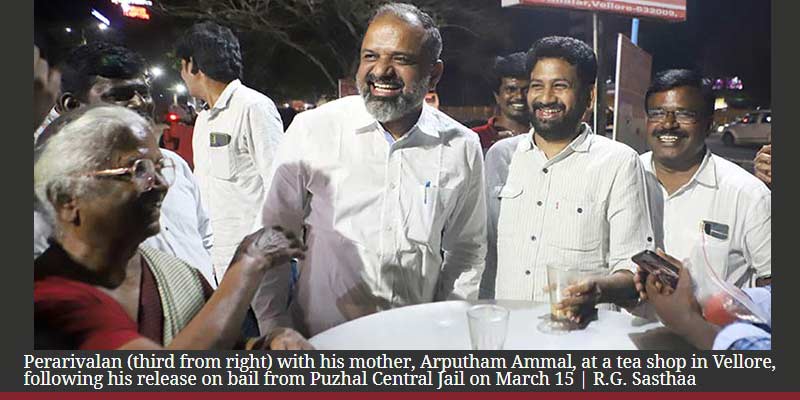 • Invoking its power under Article 142 of the Constitution, the Supreme Court ordered the release of A.G. Perarivalan, who has served over 30 years in jail in the Rajiv Gandhi assassination case.

• A bench headed by Justice L. Nageswara Rao said the Tamil Nadu state cabinet’s advice recommending the premature release of all seven convicts in the case was binding on the governor.

• The Supreme Court discarded the Centre’s argument that the President exclusively has the power to grant pardon in a case under section 302 the Indian Penal Code, saying this would render Article 161 (power of governor to grant pardon) functionless.

• The bench held that states have the power to advise and aid the governor in case of pleas of pardon under Article 161 made by convicts in murder cases.

• Article 142 is about the enforcement of decrees and orders of the Supreme Court.

• It deals with the Supreme Court’s power to exercise its jurisdiction and pass order for doing complete justice in any cause or matter pending before it.

• It states that, “The Supreme Court in the exercise of its jurisdiction may pass such decree or make such order as is necessary for doing complete justice in any cause or matter pending before it, and any decree so passed or orders so made shall be enforceable throughout the territory of India in such manner as may be prescribed by or under any law made by Parliament and, until provision in that behalf is so made, in such manner as the President may by order prescribe.”

• Section 2 states that “Subject to the provisions of any law made in this behalf by Parliament, the Supreme Court shall, as respects the whole of the territory of India, have all and every power to make any order for the purpose of securing the attendance of any person, the discovery or production of any documents, or the investigation or punishment of any contempt of itself.”

• On November 9, 2019, the Supreme Court in the judgment on the Ayodhya title dispute used special powers granted in the Article 142 of the Constitution. Though the disputed 2.77 acres of land was awarded for a temple, based on the evidence, the top court invoked the powers of Article 142 to grant five acres for a mosque in Ayodhya.

• The SC bench also invoked this Article to grant relief to Nirmohi Akhara and sought its inclusion on the trust formed by the Centre under Section 6 of the Ayodhya Act to construct Temple.

• In October 2019, the Supreme Court exercised its inherent powers under Article 142 of the Constitution to annul a marriage of an estranged couple, residing separately for over two decades, saying it was a case of irretrievable breakdown of wedlock.

• Rajiv Gandhi was assassinated on the night of May 21, 1991 at a poll rally in Tamil Nadu’s Sriperumbudur by a woman suicide bomber, identified as Dhanu. Fourteen others, including Dhanu herself, were also killed.

• In its May 1999 order, the top court had upheld the death sentence of four convicts — Perarivalan, Murugan, Santham and Nalini.

• In April 2000, the Tamil Nadu governor had commuted the death sentence of Nalini on the basis of the state government’s recommendation.

• On February 18, 2014, the Supreme Court had commuted the death sentence of Perarivalan to life imprisonment, along with that of two other prisoners — Santhan and Murugan — on the grounds of an 11-year delay in deciding their mercy pleas by the Centre.

• Perarivalan was arrested in the case in 1991 at the age of 19. He was accused of purchasing batteries that was used to trigger the belt bomb.

• On March 9, the Supreme Court had granted bail to Perarivalan while taking note of his long incarceration and no history of complaints when out on parole.

• The Supreme Court has been hearing pleas including the one in which Perarivalan sought suspension of his life sentence in the case till the Multi Disciplinary Monitoring Agency (MDMA) probe is completed.

• The MDMA was set up in 1998 on the recommendations of Justice M.C. Jain Commission of Inquiry which had probed the conspiracy aspect of Gandhi's assassination.

• The Jain commission of inquiry in the assassination of the former Prime Minister has recommended a probe into the larger conspiracy by MDMA, and it required monitoring/tracking of absconding suspects and the role of Sri Lankan and Indian nationals in the case.

• The CBI, in its affidavit of November 20, 2020, had told the Supreme Court that the Tamil Nadu governor has to take a call on grant of remission to Perarivalan.

• Later, the governor referred the mercy plea to the President of India saying he does not have the power to decide it.

• The mercy plea has been pending since then and the Supreme Court said till the time the legal issue over the power to grant remission is decided, it would grant the bail to the convict.

• The CBI had said Perarivalan was not the subject matter of further investigation carried out by the CBI-led MDMA which is conducting a probe on the aspect of larger conspiracy as per the mandate of the Jain Commission report.

• The state government had earlier told the Supreme Court that the Cabinet had already passed a resolution, on September 9, 2018, recommending to the governor to prematurely release all seven convicts in the case.

Article 161 – Power of Governor to grant pardons etc, and to suspend, remit or commute sentences in certain cases.

The governor of a state shall have the power to grant pardons, reprieves, respites or remissions of punishment or to suspend, remit or commute the sentence of any person convicted of any offence against any law relating to a matter to which the executive power of the State extends.