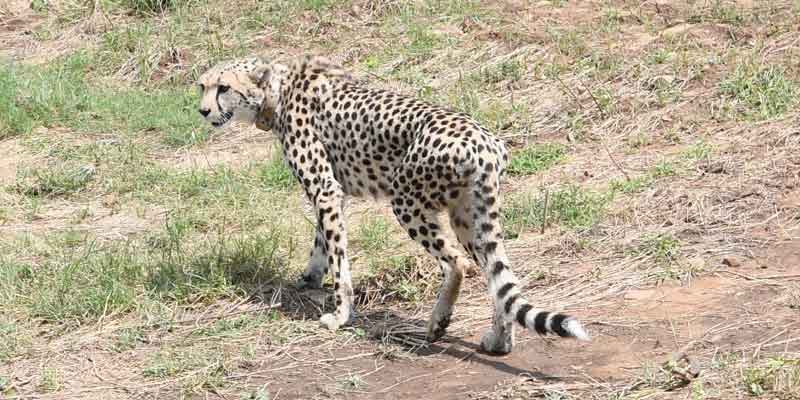 Prime Minister Narendra Modi released these felines into a special enclosure in the park by operating a lever of the cages in which they were transported from the African country.

The cheetahs, the fastest land animal, have been brought to the park as part of an intercontinental translocation project to reintroduce the feline in India seven decades after it was declared extinct in the country. 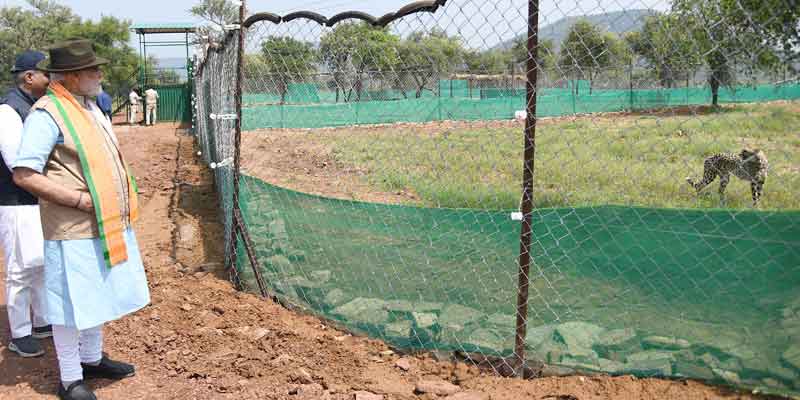 • Cheetah, the world’s fastest land animal, got completely wiped out from India due to their use for coursing, sport hunting, overhunting and habitat loss.

• The last cheetah died in the country in 1947 in Korea district in present-day Chhattisgarh and the animal was officially declared extinct in 1952.

• Cheetah is considered vulnerable under the International Union for Conservation of Nature’s (IUCN) red list of threatened species, with a declining population of less than 7,000 found primarily in African savannas.

• Cheetah has a very special significance for the national conservation ethic and ethos. Bringing the cheetah back to India would have equally important conservation ramifications. Cheetah reintroduction will be part of a prototype for restoration of original cheetah habitats and their biodiversity, helping to stem the degradation and rapid loss of biodiversity.

• At the first wildlife board meeting of Independent India in 1952, the government had “called for assigning special priority for the protection of the cheetahs in central India and a bold experimentation to preserve the cheetah” was suggested.

• Subsequently, negotiations commenced with the Shah of Iran in the 1970s for bringing the Asiatic cheetah to India in exchange for Asiatic lions. Keeping in view the small Asiatic cheetah population of Iran and the genetic similarity between the Iranian and the African cheetah, it was decided that the latter would be introduced in India.

• Among large carnivores, conflict with human interests are lowest for cheetahs, as they are not a threat to humans and usually do not attack large livestock. Bringing back a top predator restores historic evolutionary balance resulting in cascading effects on various levels of the ecosystem leading to better management and restoration of wildlife habitat (grasslands, scrublands and open forest ecosystems), conservation of cheetah’s prey and sympatric endangered species and a top-down effect of a large predator that enhances and maintains the diversity in lower trophic levels of the ecosystems.

• The main goal of cheetah reintroduction project in India is to establish viable cheetah metapopulation in India that allows the cheetah to perform its functional role as a top predator and provides space for the expansion of the cheetah within its historical range thereby contributing to its global conservation efforts.

• The ‘African Cheetah Introduction Project in India’ was first conceived in 2009. In 2013, the Supreme Court turned down the plea for relocation of African cheetah at Kuno National Park in Madhya Pradesh.

• In January 2020, the Supreme Court allowed the government to introduce the African cheetah to a suitable habitat on an experimental basis to see whether it can adapt to Indian conditions. 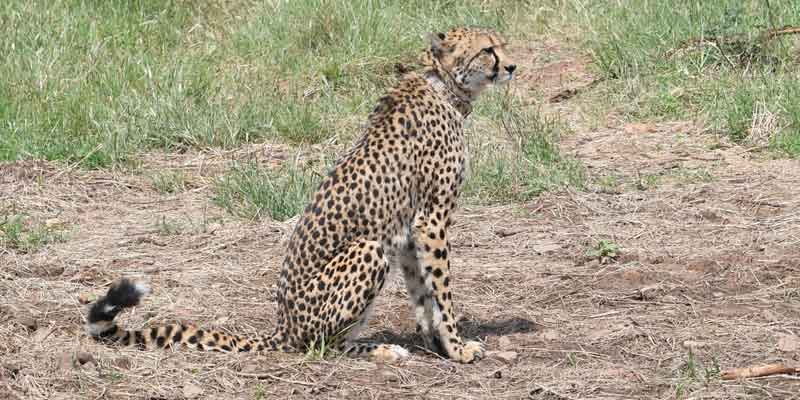 Why was Kuno National Park selected?

• Kuno National Park (KNP) in Madhya Pradesh was considered ready for receiving cheetahs with the least management interventions since a lot of investments had been done in this protected area for reintroducing Asiatic lions, which are also an endangered species.

• Kuno National Park was established in Madhya Pradesh in 1981. It was also known as Kuno-Palpur and Palpur-Kuno Wildlife Sanctuary.

• Spread over 748 sq km, KNP has an adequate prey base. It is devoid of human settlements, forms a part of the Sheopur-Shivpuri deciduous open forest landscape. The carrying capacity can be further enhanced by including the remaining part of the Kuno Wildlife Division (1,280 sq km) through prey restoration.

• KNP is situated on the northern side of Vidhyachal mountains and draws its name from a tributary of the Chambal river, Kuno.

• The action plan for cheetah translocations in KNP has been developed in compliance with International Union for Conservation of Nature (IUCN) guidelines and considering site assessment and prey density, current cheetah carrying capacity of the national park, among other criteria.

• Financial and administrative support to the cheetah reintroduction programme in India would be provided by the ministry through the National Tiger Conservation Authority (NTCA).