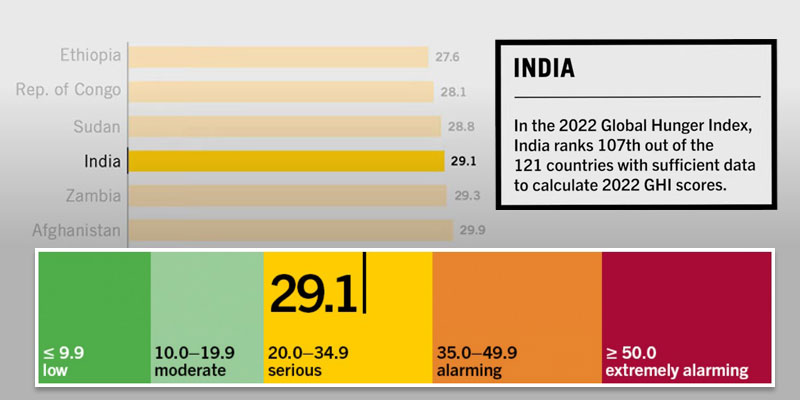 What is Global Hunger Index?

• The Global Hunger Index (GHI) is a tool designed to comprehensively measure and track hunger at global, regional, and national levels, reflecting multiple dimensions of hunger over time.

• It is a peer-reviewed annual report, jointly published by Concern Worldwide and Welthungerhilfe.

• The GHI is intended to raise awareness and understanding of the struggle against hunger, provide a way to compare levels of hunger between countries and regions, and call attention to those areas of the world where hunger levels are highest and where the need for additional efforts to eliminate hunger is greatest.

How are the scores calculated?

• In 2022, data were assessed for the 136 countries that met the criteria for inclusion in the GHI, and GHI scores were calculated for 121 of those countries based on data from 2017 to 2021. The data used to calculate GHI scores come from published UN sources (Food and Agriculture Organisation of the United Nations, the World Health Organisation, UNICEF, and the Inter-agency Group for Child Mortality Estimation), the World Bank, and the Demographic and Health Surveys Programme.

• GHI scores are calculated using a three-step process that draws on available data from various sources to capture the multidimensional nature of hunger.

• First, each country’s GHI score is calculated based on a formula that combines four indicators that together capture the multidimensional nature of hunger:

i) Undernourishment: The share of the population with insufficient caloric intake.

ii) Child Stunting: The share of children under age five who have low height for their age, reflecting chronic undernutrition.

iii) Child Wasting: The share of children under age five who have low weight for their height, reflecting acute undernutrition.

iv) Child Mortality: The share of children who die before their fifth birthday, partly reflecting the fatal mix of inadequate nutrition and unhealthy environments.

• Second, each of the four component indicators is given a standardised score on a 100-point scale based on the highest observed level for the indicator on a global scale in recent decades.

• Third, standardised scores are aggregated to calculate the GHI score for each country, with each of the three dimensions (inadequate food supply, child mortality and child undernutrition, which is composed equally of child stunting and child wasting) given equal weight.

• This three-step process results in GHI scores on a 100-point GHI Severity Scale, where 0 is the best score (no hunger) and 100 is the worst.

• A value of 100 would signify that a country’s undernourishment, child wasting, child stunting, and child mortality levels each exactly meets the thresholds set slightly above the highest levels observed worldwide in recent decades. A value of 0 would mean that a country had no undernourished people in the population, no children younger than five who were wasted or stunted, and no children who died before their fifth birthday. 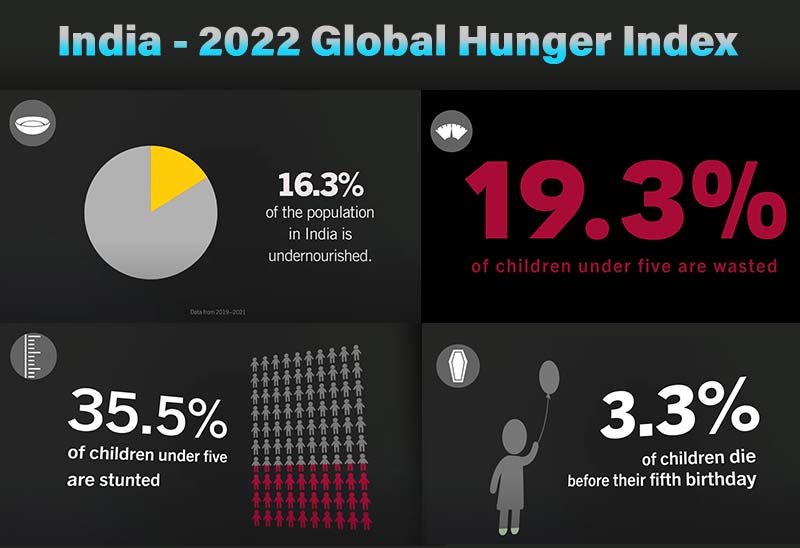 India has the world’s highest child wasting rate, at 19.3 per cent.

With a score of 29.1, the level of hunger in India has been labelled “serious”.  In Asia, Afghanistan with a rank of 109 is the only country behind India.

The example of India shows the importance of considering the subnational context when designing programmes and policies to target child stunting. Researchers investigated the factors that contributed to a decline in stunting in four Indian states between 2006 and 2016: Chhattisgarh,

Gujarat, Odisha, and Tamil Nadu. They found that stunting fell mainly in response to improvements in the coverage of health and nutrition interventions, household conditions (such as socioeconomic status and food security), and maternal factors (such as mothers’ health and education).

While improvements in household conditions were the most important factor for each of the four states, the second most important factor varies by state. This variability across states “indicates the need for contextualised policy and programmatic initiatives to help focus the efforts in the sectors that need the most attention for continued decline in stunting”. 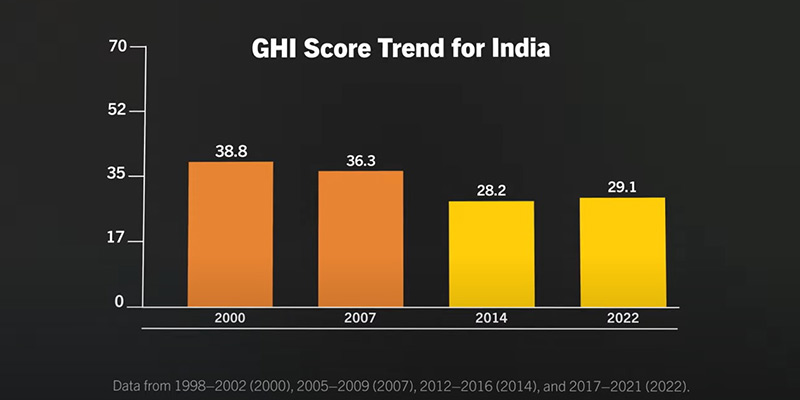 • According to the 2022 GHI, global progress against hunger has largely stagnated in recent years. In many countries across regions the situation has worsened.

• The share of people who lack regular access to sufficient calories is increasing, with as many as 828 million people undernourished in 2021.

• The situation is likely to worsen in the face of the current barrage of overlapping global crises — conflict, climate change and the economic fallout of the COVID-19 pandemic — all of which are powerful drivers of hunger. The war in Ukraine has further increased global food, fuel, and fertilizer prices and has the potential to contribute to food shortages in 2023 and beyond.

• These crises come on top of underlying factors such as poverty, inequality, inadequate governance, poor infrastructure, and low agricultural productivity that contribute to chronic hunger and vulnerability. Globally and in many countries and regions, current food systems are inadequate to the task of addressing these challenges and ending hunger.

• Africa South of the Sahara and South Asia are the regions with the highest hunger levels and are most vulnerable to future shocks and crises. Like other world regions, progress against hunger in these regions has stagnated, which is particularly troubling given their desperate need for improvement.

• South Asia has the world’s highest child stunting and child wasting rates. In Africa South of the Sahara, the prevalence of undernourishment and the rate of child mortality are higher than in any other world region. Parts of East Africa are experiencing one of the most severe droughts of the past 40 years, threatening the survival of millions.

• In West Asia and North Africa, where hunger is moderate, there are worrying signs of a reversal in progress against hunger. Hunger is considered low in Latin America and the Caribbean, East and Southeast Asia, and Europe and Central Asia.

• Without a major shift, neither the world as a whole nor approximately 46 countries are projected to achieve even low hunger as measured by the GHI by 2030. There are 44 countries that currently have serious or alarming hunger levels. As many as 20 countries with moderate, serious, or alarming hunger have higher 2022 GHI scores than 2014 GHI scores. These countries are in diverse world regions, not just those with the highest hunger overall.

The problem of hunger is complex, and different terms are used to describe its various forms.

Hunger is usually understood to refer to the distress associated with a lack of sufficient calories. The Food and Agriculture Organisation of the United Nations (FAO) defines food deprivation, or undernourishment, as the consumption of too few calories to provide the minimum amount of dietary energy that each individual requires to live a healthy and productive life, given that person’s sex, age, stature, and physical activity level.

Undernutrition goes beyond calories and signifies deficiencies in any or all of the following: energy, protein, and/ or essential vitamins and minerals. Undernutrition is the result of inadequate intake of food in terms of either quantity or quality, poor utilisation of nutrients due to infections or other illnesses, or a combination of these factors. These, in turn, are caused by a range of factors, including household food insecurity; inadequate maternal health or childcare practices; or inadequate access to health services, safe water, and sanitation.