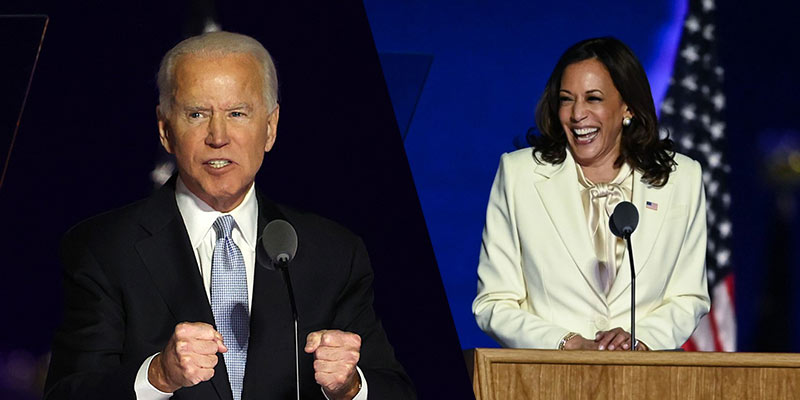 Joe Biden triumphed over incumbent US President Donald Trump in a divisive, bitter and closely-fought presidential election. His running mate, Kamala Harris, will be the first woman to serve as the US vice president.

Biden and Harris would be sworn in as the President and Vice President of the country on January 20.

The 77-year-old Democrat, who became the oldest man ever to be elected to the White House, will be the 46th president of the United States, after securing a major victory in Pennsylvania, the state where he was born put him over the 270 electoral votes needed to win. He will be 78 years old when he enters the White House in January 2021.

Earlier, Trump was the oldest person to assume the presidency when he was sworn in at age 70 in 2017.

Kamala Harris will be the 49th US vice president in January as she succeeds Mike Pence.

Trump is the first incumbent president to lose a re-election bid after George H.W.Bush in 1992.

A veteran in US politics for around five decades

President-elect Joseph Robinette Biden Jr has spent half a century in public life as a US senator and vice president.

He was born in the blue-collar city of Scranton, Pennsylvania in 1942. His family later moved to Delaware. He overcame stuttering as a boy by reciting passages of poetry to a mirror. He studied at the University of Delaware and then earned a law degree from Syracuse University in 1968.

Biden arrived in Washington as a young upstart. He was elected in 1972 at age 29 to the US Senate from Delaware and remained there for 36 years before serving from 2009 to 2017 as vice president under Barack Obama.

He was practically a political novice — having served two years on a county board in Delaware — when in 1972 he became the fifth-youngest elected senator in US history.

Biden had unsuccessfully sought the Democratic presidential nomination in 1988 and 2008.

Under Obama, Biden served as a troubleshooter on matters of war and foreign affairs and on domestic issues such as gun control and fiscal policy.

First woman vice president of the US

Senator Kamala Harris, 56, who is of Indian origin, is set to become the first ever woman vice president-elect of the United States. She is also the country’s first Indian-origin, first Black and first African American vice president of the country.

Harris was born to two immigrant parents: a Black father and an Indian mother. Her father, Donald Harris, was from Jamaica, and her mother, Shyamala Gopalan, a cancer researcher and civil rights activist from Chennai. Harris was born in Oakland and grew up in Berkeley.

She became the top prosecutor for San Francisco in 2003. She was elected the first woman and the first black person to serve as California’s attorney general in 2010, overseeing the country’s second largest Justice Department, only behind the US Department of Justice.

She was elected as California’s junior US senator in 2017. Harris became the first Indian-origin and second African-American woman to join the Senate.

She has released a memoir titled ‘The Truths We Hold: An American Journey’.

With the historic electoral win by Kamala Harris, her husband Douglas Emhoff also scripted history as he will be the first ‘Second Gentleman’ - the first male spouse of a vice president in the US when she takes the oath of office in January.

The wife of a US President is addressed as First Lady while that of Vice President as Second Lady. America has never in its history before had a female President and Vice President so it remains to be seen what formal title — Second Gentleman or Second Husband — will be given to the first male spouse of an elected leader.

Advocate of a strong India-US relationship

Biden has a strong track record of being an ardent advocate of a strong India-US relationship both as a Senator from Delaware for over three decades and then as deputy of President Obama for eight years.

From playing a key role in the passage of India-US civil nuclear deal during a Republican administration to setting up the goal of a $500 billion in bilateral trade, Biden has strong ties with the Indian leadership across the aisle and has a large number of Indian-Americans within his close circuit.

At a fundraiser in July, Biden had said that India and the US were natural partners. “That partnership, a strategic partnership, is necessary and important in our security,” he said when asked whether India is critical to the US’ national security.

Referring to his eight years as the vice president, Biden said that he was proud to have played a role in securing Congressional approval for the US-India Civil Nuclear Agreement, which he said was a “big deal”.

“Helping open the door to great progress in our relationship and strengthening our strategic partnership with India was a high priority in the Obama-Biden administration and will be a high priority if I’m elected president,” Biden had said.

Biden will inherit a nation in turmoil over COVID-19 and the related economic slowdown, as well as protests against racism and police brutality. He has said that his first priority will be developing a plan to contain and recover from the pandemic, promising to improve access to testing.

Biden plans to increase the number of high-skilled visas, including the H-1B, and eliminate the limit on employment-based visas by country, both of which are expected to benefit tens of thousands of Indian professionals impacted by some immigration policies of the outgoing Trump administration.

With Kamala Harris as his deputy, Biden is expected to reverse the move of the outgoing Trump administration to revoke work permits to the spouses of H-1B visas, which had adversely impacted a large number of Indian families in the US.

All these are part of a comprehensive immigration reform that the Biden administration plans to work on, either in one go or in separate pieces.

H-1B visas, which expand the available pool of high skilled workers in the US, is a non-immigrant visa that allows American companies to employ foreign workers in speciality occupations that require theoretical or technical expertise. The technology companies depend on it to hire tens of thousands of employees each year from countries like India and China.

Employment-based visas, also known as green cards, allow migrants to gain lawful permanent residence in the US in order to engage in skilled work.