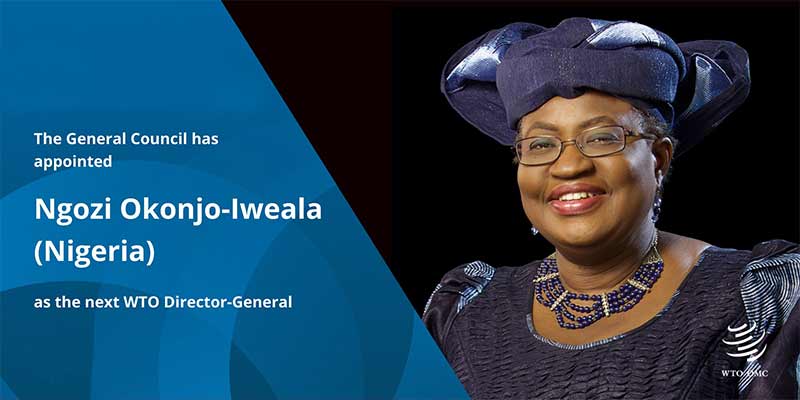 • Nigeria’s Ngozi Okonjo-Iweala was appointed on February 15 to head the World Trade Organization (WTO), becoming the first woman and first African to take on the role.

• Okonjo-Iweala, 66, was named director-general by representatives of the 164 countries that make up the WTO, which deals with the rules of trade between nations.

• She will take charge as director-general on March 1. Her term, renewable, will expire on August 31, 2025.

• The appointment came after US President Joe Biden endorsed her candidacy, which had been blocked by former President Donald Trump.

What is the WTO?

• The WTO is an international organisation dealing with the rules of trade between nations.

• The primary purpose of WTO is to open trade for the benefit of all.

• The World Trade Organization came into being on January 1, 1995. But its trading system is half a century older. Since 1948, the General Agreement on Tariffs and Trade (GATT) had provided the rules for the system. Whereas GATT had mainly dealt with trade in goods, the WTO and its agreements cover trade in services, and in traded inventions, creations and designs (intellectual property). 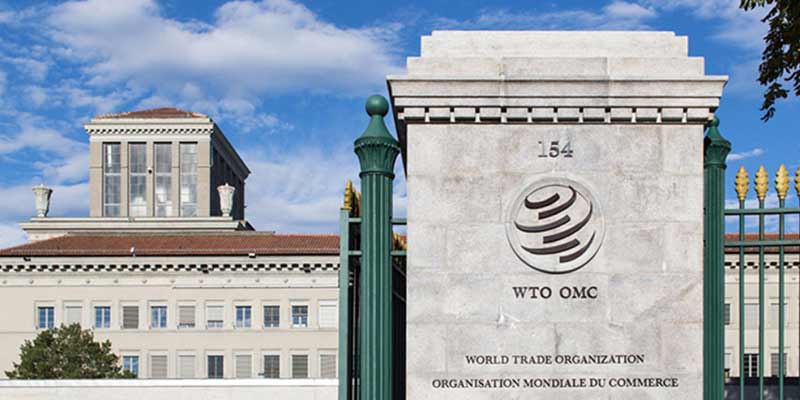 • The WTO provides a forum for negotiating agreements aimed at reducing obstacles to international trade and ensuring a level playing field for all, thus contributing to economic growth and development.

• The WTO currently has 164 members, of which 117 are developing countries or separate customs territories. WTO activities are supported by a Secretariat led by the WTO Director-General. The Secretariat is located in Geneva, Switzerland.

• Okonjo-Iweala will be the seventh director-general of WTO.

• She has been Nigeria’s finance minister and, briefly, foreign minister, and has had a 25-year career at the World Bank as an advocate for economic growth and development in poorer countries. She rose to the No. 2 position of managing director, where she oversaw $81 billion in development financing in Africa, South Asia, Europe and Central Asia.

• She made an unsuccessful bid for the top post in 2012 with the backing of African and other developing countries, challenging the traditional practice that the World Bank is always headed by an American. 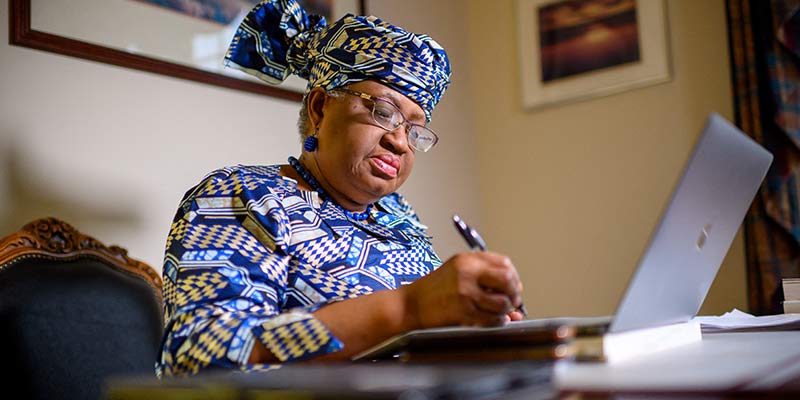 • Serving as special envoy for the African Union to mobilise financial support for the fight against COVID-19, she urged richer countries to support a two-year standstill on debt service for indebted countries and proposed easing economic sanctions on Sudan and Zimbabwe for health reasons.

• Okonjo-Iweala has a bachelor’s degree in economics from Harvard University and a PhD in regional economics and development from the Massachusetts Institute of Technology.

• As director-general, Okonjo-Iweala, 66, will need to broker international trade talks in the face of persistent US-China conflict, respond to pressure to reform trade rules and counter protectionism heightened by the COVID-19 pandemic.

The process for selecting a new director-general was triggered on May 14, 2020 when former director-general Roberto Azevêdo informed WTO members he would be stepping down from his post one year before the expiry of his mandate. He subsequently left office on August 31, 2020.

The General Council decision on the new appointment follows months of uncertainty which arose when the US initially refused to join the consensus around Okonjo-Iweala and threw its support behind South Korean Trade Minister Yoo Myung-hee. But following Yoo’s decision on February 5 to withdraw her candidacy, the administration of newly elected US President Joe Biden dropped the US objection and announced instead that Washington extends its strong support to the candidacy of Okonjo-Iweala.

Trump admin’s issues with the WTO

• Trump repeatedly accused the WTO of unfair treatment of the US, started a trade war with China in defiance of the WTO system, and threatened to pull the US out of the trade body altogether.

• The US had blocked the appointment of new judges to the WTO’s appellate body, essentially freezing its ability to resolve extended and complex trade disputes.

• The US government has argued that the trade organisation is slow-moving and bureaucratic, ill-equipped to handle the problems posed by China’s state-dominated economy and unduly restrictive on US attempts to impose sanctions on countries that unfairly subsidise their companies or export at unusually low prices.

• So far, Biden has not said whether the US will unblock the appellate appointments, and he has not withdrawn the steel tariffs either, which are backed by US steel industry and union groups.

India and the WTO

India is one of the founding members of WTO, which has played an important part in the effective formulation of major trade policies.

India is involved in many trade disputes, mostly against the US, at the WTO.

India has taken a number of initiatives to ensure that WTO becomes a centrality to the global trading system. After the disappointing outcome of the Argentina Ministerial in 2017, India organised a mini-ministerial on March 19, 2018 to make sure that the WTO becomes more effective. The participation of 57 countries manifested the success of this event which implies that most of the member states favour reforms in the functioning of WTO.

In the ongoing discussions on WTO reforms, India’s proposal seeks to re-affirm the importance of development and promote inclusive growth.

The broad elements of India’s proposal include:

1) Preserving the core values of the Multilateral Trading System.

2) Resolving the impasse in the Dispute Settlement System.

During the WTO TRIPS Council meeting, held on October 15-16, 2020, India and South Africa jointly proposed “Waiver from Certain Provisions of the TRIPS Agreement for the Prevention, Containment and Treatment of COVID-19” for a limited time period, with a view to ensure that the intellectual property rights do not become a barrier in the timely and affordable access to medical products, including vaccines and therapeutics, and enable nations to deal effectively with the public health emergency arising out of COVID-19 pandemic. The proposal has received broad-based support from many WTO members, civil society and international organisations.

The WTO’s Appellate Body (AB) is a permanent body intended by the Dispute Settlement Understanding (DSU) to resolve appeals on issues of law. It is ordinarily composed of seven members having a four-year term, with the possibility of one reappointment. Since July 2017, the United States has been stalling AB appointments on the pretext that it has not been functioning in accordance with the DSU norms – precipitating the ‘Appellate Body crisis’. With fewer than three members to hear any appeal since  December 10, 2019, the AB is not able to function as mandated under the DSU. In the wake of this crisis, around 23 WTO members have created a Multiparty Interim Arbitration (MPIA) mechanism that closely replicates the substantive and procedural  aspects of appellate review under the AB.

EU, China, Brazil, Australia, New Zealand are some of the key members of MPIA. India has not joined MPIA yet. India supports the restoration and preservation of the normal functioning of the two-stage binding WTO dispute settlement mechanism.

In agriculture, India along with many other developing countries, have been demanding a permanent solution on the issue of public stockholding for food security purposes. This has become even more relevant in the wake of the ongoing pandemic, as the government had to step up disbursement of food grains under the public distribution programmes for ensuring food security of the masses.

India has also been raising the issue of imbalances and asymmetries in the existing Agreement on Agriculture (AoA) and their implications for developing countries.