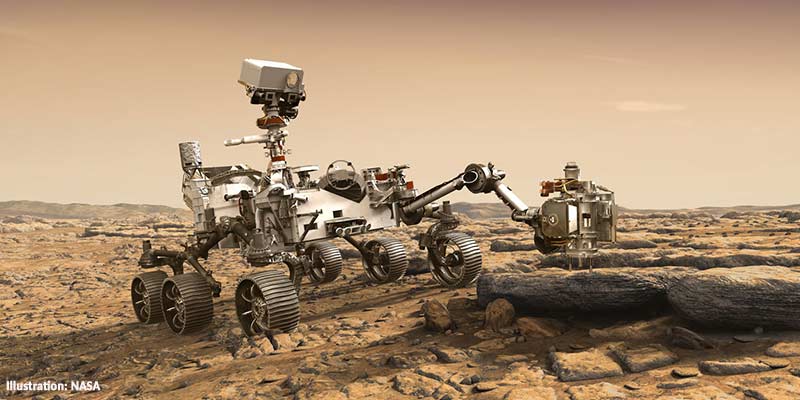 • After a nearly seven month journey through space, Perseverance — the largest and the most advanced rover NASA has ever sent to another world — successfully touched down on the surface of Mars on February 19.

• Packed with groundbreaking technology, the Mars 2020 mission was launched on July 30, 2020 from Cape Canaveral Space Force Station in Florida.

Objectives of the mission

• A primary objective for Perseverance’s mission on Mars is astrobiology research, including the search for signs of ancient microbial life.

• The Perseverance rover mission marks an ambitious first step in the effort to collect Mars samples and return them to Earth.

• The rover will characterise the planet’s geology and past climate and be the first mission to collect and cache Martian rock and regolith, paving the way for human exploration of the Red Planet.

• Subsequent NASA missions, in cooperation with European Space Agency (ESA), will send spacecraft to Mars to collect these cached samples from the surface and return them to Earth for in-depth analysis.

• The Mars 2020 Perseverance mission is part of NASA’s Moon to Mars approach, which includes Artemis missions to the Moon that will help prepare for human exploration of the Red Planet.

What is the purpose of a rover?

• One type, called orbiters, orbit Mars, taking pictures as they zoom around the planet. Other spacecraft, called landers, provide photos and information from their landing spots on the surface of Mars.

• Rovers have wheels and specialize in moving around. They land on the surface of Mars and drive around to different spots.

• Rovers help scientists in their quest to understand what different parts of the planet are made of.

• Mars is made up of lots of different types of rocks, and each rock is made up of a mixture of chemicals. A rover can drive around to different areas, studying the different chemicals in each rock. These chemicals can tell scientists something about the environments that changed that rock over time.

Landing on surface of Mars

• The rover streaked through the Martian atmosphere and landed safely inside the vast Jezero Crater on Mars, after travelling for 203 days and traversing 472 million kilometres.

• The Mars Entry, Descent, and Landing Instrumentation 2 (MEDLI2) sensor suite collected data about Mars’ atmosphere during entry, and the Terrain-Relative Navigation system autonomously guided the spacecraft during final descent. The data from both are expected to help future human missions land on other worlds more safely and with larger payloads.

• The six-wheeled vehicle came to rest about 2 kilometers from towering cliffs at the foot of a remnant fan-shaped river delta etched into a corner of the crater billions of years ago and considered a prime spot for geo-biological study on Mars. 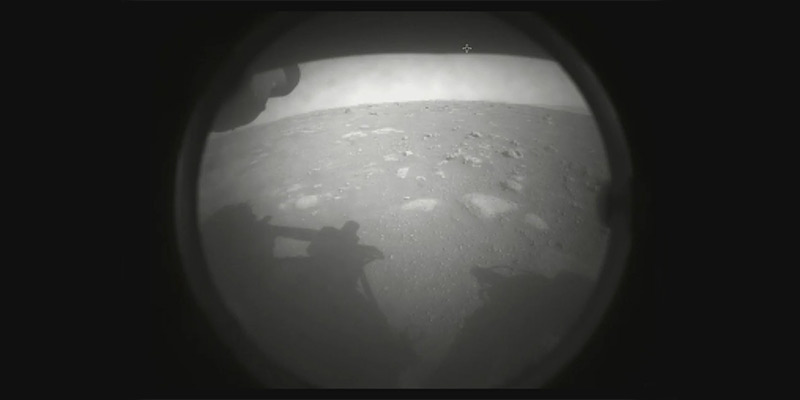 • Moments after touchdown, Perseverance beamed back its first black-and-white images from the Martian surface, one of them showing the rover's shadow cast on the desolate, rocky landing site.

How will the rover collect samples?

• Equipped with seven primary science instruments, the most cameras ever sent to Mars, and its exquisitely complex sample caching system – the first of its kind sent into space – Perseverance will scour Mars’ Jezero Crater for fossilized remains of ancient microscopic Martian life, taking samples along the way.

• About the size of a car, the 1,026-kg robotic geologist and astrobiologist will undergo several weeks of testing before it begins its two-year science investigation of Jezero Crater.

• Some 45 km wide, Jezero Crater sits on the western edge of Isidis Planitia, a giant impact basin just north of the Martian equator. Scientists have determined that 3.5 billion years ago the crater had its own river delta and was filled with water. 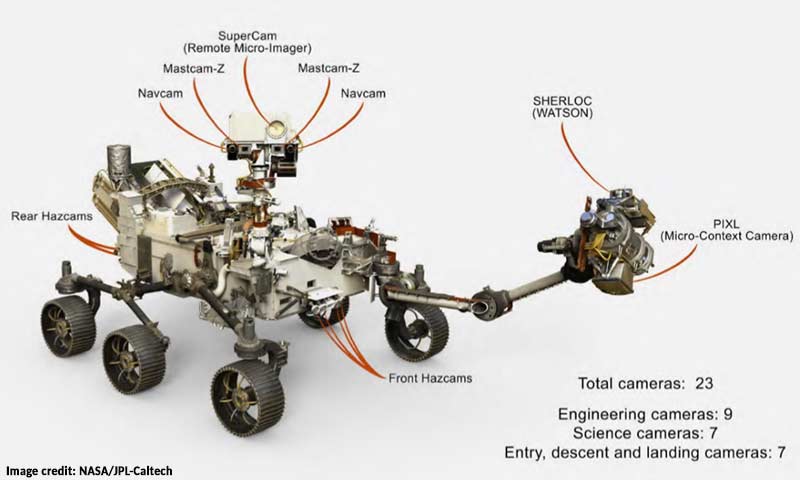 • Mastcam-Z is a pair of zoomable science cameras on Perseverance’s remote sensing mast, or head, that creates high-resolution, color 3D panoramas of the Martian landscape.

• Also located on the mast, the SuperCam uses a pulsed laser to study the chemistry of rocks and sediment and has its own microphone to help scientists better understand the property of the rocks, including their hardness.

• Currently attached to the belly of Perseverance, the diminutive Ingenuity Mars Helicopter is a technology demonstration that will attempt the first powered, controlled flight on another planet.

• Project engineers and scientists will now put Perseverance through its paces, testing every instrument, subsystem, and subroutine over the next month or two. Only then will they deploy the helicopter to the surface for the flight test phase. If successful, Ingenuity could add an aerial dimension to exploration of the Red Planet in which such helicopters serve as scouts or make deliveries for future astronauts away from their base.

• While the rover will investigate the rock and sediment of Jezero’s ancient lakebed and river delta to characterize the region’s geology and past climate, a fundamental part of its mission is astrobiology, including the search for signs of ancient microbial life.

• To that end, the Mars Sample Return campaign, being planned by NASA and ESA, will allow scientists on Earth to study samples collected by Perseverance to search for definitive signs of past life using instruments too large and complex to send to the Red Planet. 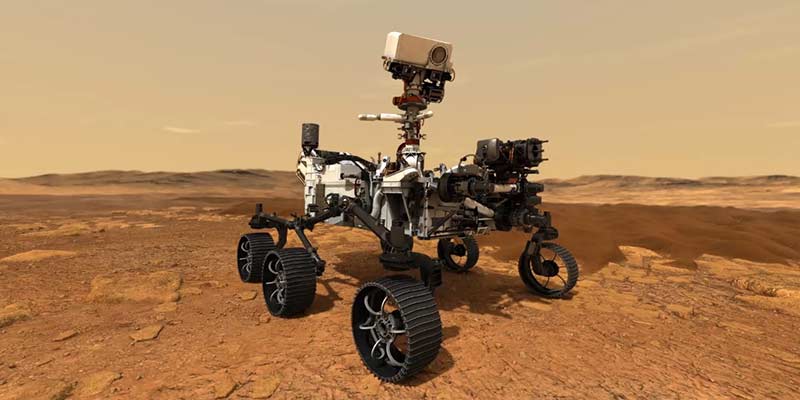 • The power system that provides electricity and heat for Perseverance through its exploration of Jezero Crater is a Multi-Mission Radioisotope Thermoelectric Generator (MMRTG). The US Department of Energy (DOE) provided it to NASA through an ongoing partnership to develop power systems for civil space applications.

• This is the fifth Martian rover of NASA to carry out a soft landing.

• In January 2004, two robotic geologists named Spirit and Opportunity landed on opposite sides of the red planet.

Mars missions by UAE and China

UAE and China had launched their Mars missions in July 2020.

The UAE’s Hope probe successfully entered Martian orbit on February 9 this year, making the country only the fifth ever to have reached Mars, and the second after India to do so successfully on the first attempt. The Hope probe will make the first-ever detailed study of Mars’ atmosphere and will study the planet’s weather cycles.

A Chinese spacecraft — Tianwen-1 — went into orbit around Mars on February 10 on an expedition to land a rover on the surface and scout for signs of ancient life, authorities announced in a landmark step in the country’s most ambitious deep-space mission yet. The probe, including an orbiter, a lander and a rover, successfully entered the Mars orbit after a nearly seven-month voyage from Earth. The lander carrying the rover is expected to land on Mars in May or June. Chinese space engineers and scientists have chosen a relatively flat region in the southern part of Utopia Planitia, a large plain, as a potential landing zone.

Mars Orbiter Mission (MOM), the maiden interplanetary mission of ISRO, launched on November 5, 2013, by PSLV-C25 got inserted into the Martian orbit on September 24, 2014, in its first attempt. MOM is credited with many laurels such as cost-effectiveness, short period of realisation, economical mass-budget, miniaturisation of five heterogeneous science payloads, etc.