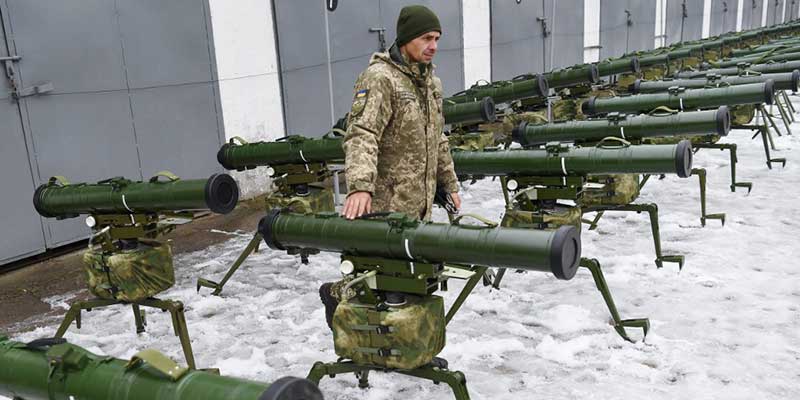 International deliveries of arms were flat in the period 2016-2020, ending more than a decade of increases, the Stockholm International Peace Research Institute (SIPRI) said in a report.

It was the first time since 2001-2005 that the volume of deliveries of major arms between countries — an indicator of demand — did not increase from the previous five year period, SIPRI said.

SIPRI is an independent international institute dedicated to research into conflict, armaments, arms control and disarmament. Established in 1966, SIPRI provides data, analysis and recommendations, based on open sources, to policymakers, researchers, media and the interested public.

Key facts of the report: 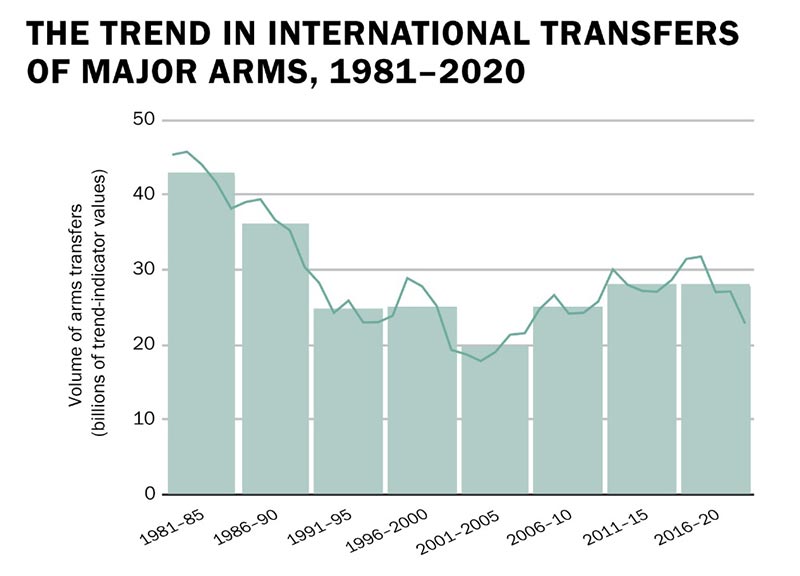 • The five largest arms exporters in 2016–20 were the United States, Russia, France, Germany and China. Together, they accounted for 76 per cent of all exports of major arms during 2016–20.

• The five largest arms importers during 2016–20 — Saudi Arabia, India, Egypt, Australia and China — together received 36 per cent of all imports of major arms.

• Saudi Arabia, the world's biggest arms importer, increased its arms imports by 61 per cent and Qatar by 361 per cent. 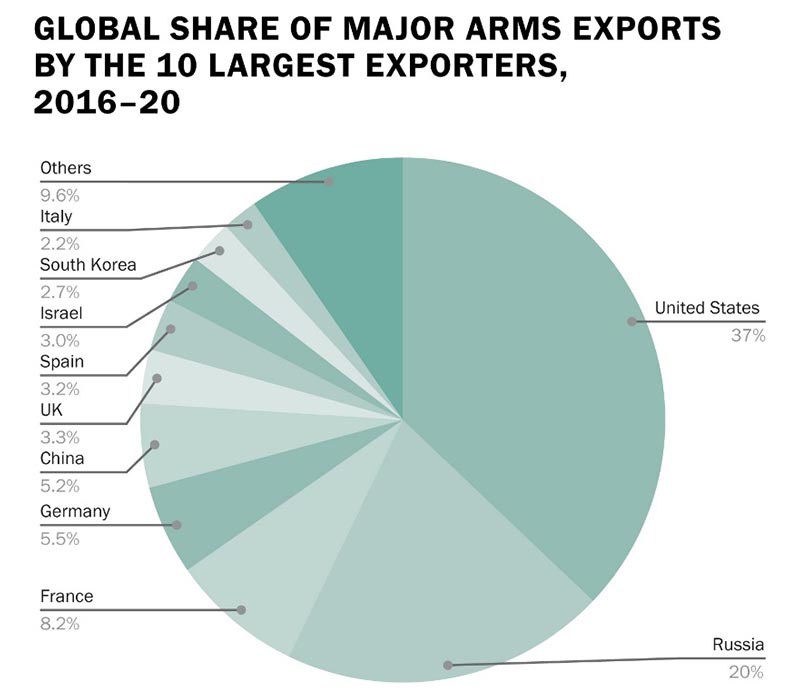 Almost half (47 per cent) of US arms exports went to the Middle East during 2016–20, an increase of 28  per cent on the previous five-year period.

During 2016–20, Russia delivered major arms to 45 states and accounted for 20 per cent of total global arms exports. India remained the main recipient of Russian arms in 2016–20, accounting for 23 per cent of the total, followed by China (18 per cent) and Algeria (15 per cent).

Aircrafts accounted for 49 per cent of Russian arms exports during 2016–20. These transfers included deliveries of a total of 231 combat aircrafts.

The overall decrease in Russia’s arms exports between 2011–15 and 2016–20 was almost entirely attributable to a 53 per cent drop in its arms exports to India.

Although several large Russian arms deals with India, including for combat aircrafts, were completed by 2020, India placed new orders for a variety of Russian arms in 2019–20. The ensuing deliveries will probably lead to an increase in Russian arms exports in the coming five years. 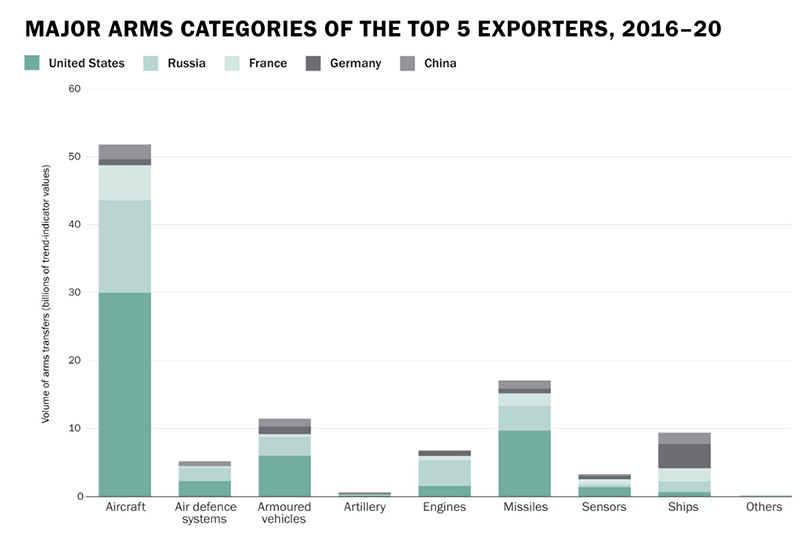 • The combined arms exports of European Union (EU) member states accounted for 26 per cent of the global total during 2016–20, the same percentage compared to 2011–15.

• The top five West European arms exporters — France, Germany, the United Kingdom, Spain and Italy — together accounted for 22 per cent of global arms exports during 2016–20, compared with 21 per cent in 2011–15.

• The UK was the world’s sixth largest arms exporter during 2016–20 and accounted for 3.3 per cent of total arms exports. British arms exports fell by 27 per cent compared with 2011–15, when they peaked due to deliveries of combat aircrafts to Saudi Arabia.

• South Korea was the ninth largest arms exporter in 2016–20 with a 2.7 per cent share of the global total. Its arms exports in 2016–20 were 210 per cent higher than in 2011–15 and 649 per cent higher than in 2001–2005. This rapid growth has mainly been the result of improvements in the South Korean arms industry’s ability to produce advanced major arms that can compete with those produced in more established arms-supplying countries. 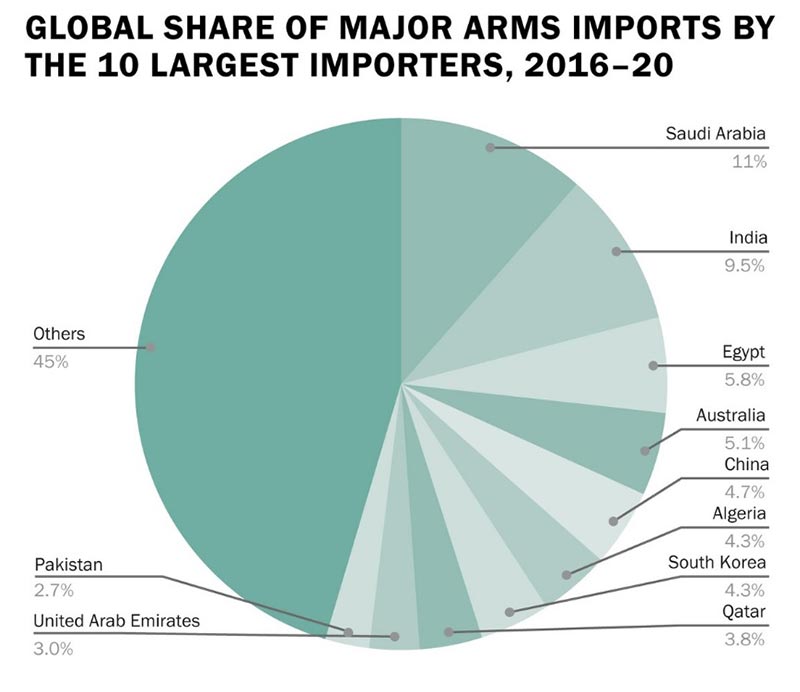 Against the backdrop of tense relations between several states in the Gulf region some noteworthy arms transfer developments occurred during 2016–20.

Saudi Arabia was the world’s largest arms importer during 2016–20 and received 11  per cent of global arms imports. The US accounted for 79 per  cent of Saudi Arabian arms imports in 2016–20, followed by the UK with 9.3 per cent.

During 2016–20, Saudi Arabia strengthened its long-range strike capabilities with 91 combat aircrafts from the US and 15 from the UK. It also imported 14 air defence systems from the US.

By the end of 2020, several large deliveries of major arms were outstanding, including for 61 combat aircrafts, four frigates and seven anti-ballistic missile systems from the US, and five frigates from Spain.

Saudi Arabia is therefore expected to remain among the world’s largest arms importers in the coming five years.

Russia was the largest arms supplier to India in both 2011–15 and 2016–20. However, Russia’s deliveries dropped by 53 per cent between the two periods and its share of total Indian arms imports fell from 70 to 49 per cent.

During 2011–15, the US was the second largest arms supplier to India, but in 2016–20 India’s arms imports from the US were 46 per cent lower than in the previous five-year period, making the US the fourth largest supplier to India during 2016–20.

France and Israel were the second and third largest arms suppliers to India during 2016–20. India’s arms imports from France increased by 709 per cent while those from Israel rose by 82 per cent.

Combat aircrafts and associated missiles made up more than 50 per cent of Indian arms imports in 2016–20.

The overall drop in India’s arms imports between 2011–15 and 2016–20 seems to be mainly due to its complex and lengthy procurement processes, combined with its attempts to reduce its dependence on Russian arms by diversifying its network of arms suppliers.

Based on its outstanding deliveries of combat aircrafts, air defence systems, ships and submarines, India’s arms imports are expected to increase over the coming five years.

In the last few years, India has taken a series of measures to boost domestic defence industry with an aim to reduce dependence on imported military platforms and hardware.

In reply to a question in Rajya Sabha, Minister of State for Defence Shripad Naik said approval (Acceptance of Necessity) was given to 112 proposals between 2018-19 and 2020-21 (till December) worth around Rs 1.99 lakh crore under various categories of capital acquisition to promote the domestic defence manufacturing.

The government has been majorly focusing on boosting domestic defence production and set a target of Rs 1.75 lakh crore ($25 billion) turnover in defence manufacturing by 2025.

In May 2020, Union Finance Minister Nirmala Sitharaman rolled out a number of reform measures for the defence sector including making separate budgetary outlay to procure Indian-made military hardware, increasing FDI limit from 49 per cent to 74 per cent under the automatic route and generating a year-wise negative list of weapons which won’t be imported.

• China, which received 4.7 per cent of global arms imports during 2016–20, was the largest arms importer among the East Asian countries in both periods. The bulk of its imports comprised air defence systems, combat aircrafts and engines for combat aircraft from Russia. However, imports from Russia are likely to reduce in volume once China’s own industry manages to consistently produce the types of major arms that it has generally imported from Russia over the years.

• Egypt’s arms imports increased by 136 per cent between 2011–15 and 2016–20. Egypt, which is involved in disputes with Turkey over hydrocarbon resources in the eastern Mediterranean, has invested heavily in its naval forces.

• With the aim of increasing its influence in the Middle East, Qatar has vastly expanded its armed forces since around 2013. This process continued during 2016–20 and Qatari arms imports were 361 per cent higher than the previous five-year period. The increase can mainly be attributed to the delivery of 24 combat aircrafts from France and 10 air defence systems from the US.

• The UAE has been among the world’s top 10 arms importers for each consecutive five-year period since 2001–2005. The UAE’s arms imports during 2016–20 were 37 per cent lower than during 2011–15, when they peaked. Outstanding deliveries at the end of 2020 — including for two frigates from France as well as air defence systems and 38 combat helicopters from the US — indicate that the UAE’s arms imports will continue to be at a high level in the coming years. After the normalisation of relations between the UAE and Israel in 2020, the US agreed to sell 50 F-35 combat aircrafts to the UAE. If deliveries of these aircrafts are implemented as planned, the UAE’s arms imports will increase in the second half of the 2020s.

• South Korean arms imports increased by 57 per cent between 2011–15 and 2016–20. This rise was mainly driven by ongoing tensions with North Korea and can largely be attributed to the delivery of 26 combat aircrafts from the US and 5 submarines from Germany.