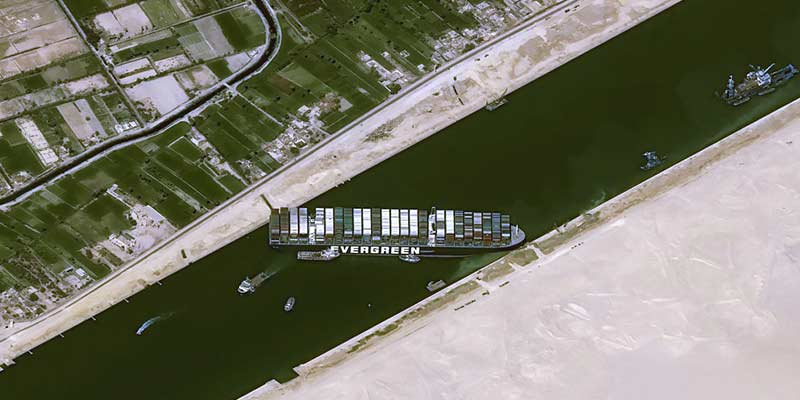 A huge container ship has run aground and is blocking traffic in the Suez Canal, one of the world’s busiest waterways and the shortest shipping route between Europe and Asia.

Traffic on the narrow waterway dividing continental Africa from the Sinai Peninsula stopped on March 23 after the MV Ever Given, a container ship operated by Taiwan’s Evergreen Marine Corp, got stuck.

The closure could affect oil and gas shipments to Europe from the Mideast, which rely on the canal to avoid sailing around Africa.

• Opened in 1869, the Suez Canal provides a crucial link for oil, natural gas and cargo being shipped from East to West.

• The Suez Canal, is an artificial sea-level waterway running north to south across the Isthmus of Suez in Egypt to connect the Mediterranean Sea and the Red Sea.

• The canal separates the African continent from Asia, and it provides the shortest maritime route between Europe and the lands lying around the Indian and Western Pacific oceans.

• Around 12 per cent of the world’s trade flows through the waterway and it remains one of Egypt’s top foreign currency earners.

• In 2015, the government of President Abdel-Fattah el-Sisi completed a major expansion of the canal, allowing it to accommodate the world’s largest vessels.

In July, 1956, Egyptian President Gamal Abdel Nasser announced the nationalisation of the Suez Canal Company, the joint British-French enterprise which had owned and operated the Suez Canal since its construction in 1869. Nasser’s announcement came about following months of mounting political tensions prompting shareholders Britain and France, along with Israel, to invade. The ‘Suez Crisis’ ended after the United States, Soviet Union and United Nations intervened, forcing Britain, France and Israel to withdraw. The canal was reopened in 1957.

In June 1967, Egypt and some other Arab states fought Israel in what became known as the Six-Day War, with Israeli troops advancing to the east bank of the Suez Canal before a ceasefire was agreed. The canal was very badly damaged in fighting and, with opposing forces encamped on either side, remained closed until after the 1973 Yom Kippur War. Egypt regained full control of the canal following the Yom Kippur War and it was reopened in June 1975.

The canal has been the site of occasional groundings that have halted shipping. In 2004, the canal was closed for three days after an oil tanker — Tropic Brilliance — got lodged. 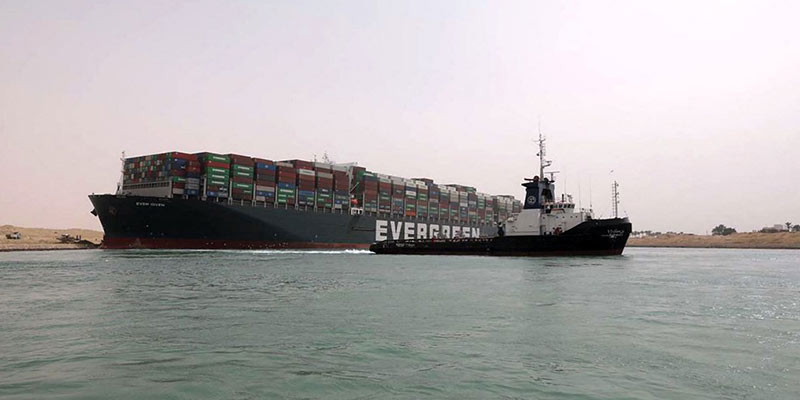 The Ever Given, built in 2018 with a length of nearly 400 meters (a quarter mile) and a width of 59 meters (193 feet), is among the largest cargo ships in the world. It can carry some 20,000 containers at a time. It previously had been at ports in China before heading toward Rotterdam in the Netherlands.

The vessel ran aground as it travelled north from the Red Sea towards the Mediterranean, twisting diagonally across the width of the canal. The principal causes were high winds and a sand storm that reduced visibility and rendered the ship unable to keep a straight course through the channel.

The ship has blocked traffic in the canal, leaving dozens of smaller ships stranded in the Mediterranean Sea and Red Sea.

The Suez Canal Authority, which operates the waterway, has deployed several tugboats in efforts to refloat the massive vessel, including a specialised suction dredger that is able to shift 2,000 cubic metres of material every hour.

Many ships are waiting for the Ever Given to be cleared, including vessels near Port Said on the Mediterranean Sea, Port Suez on the Red Sea and those already stuck in the canal system on Egypt’s Great Bitter Lake

The blockage has caused headaches for global trade. The closure also could affect oil and gas shipments to Europe from the Mideast.

It has deepened problems for shipping lines that were already facing disruption and delays in supplying retail goods to consumers.