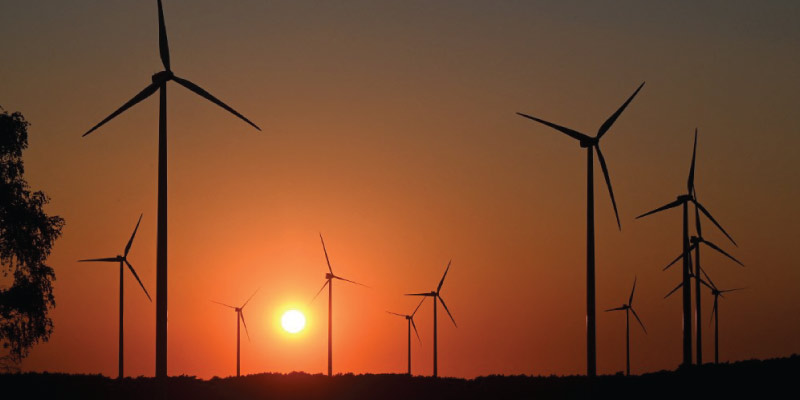 2020 was the best year in history for the global wind industry with 93 GW of new capacity installed — a 53 per cent year-on-year increase.

However, a new report published by the Global Wind Energy Council (GWEC) warns that this growth is not sufficient to ensure the world achieves net zero by 2050.

According to the Global Wind Report 2021, GWEC’s 16th annual flagship report, the world needs to be installing wind power three times faster over the next decade in order to stay on a net zero pathway and avoid the worst impacts of climate change. 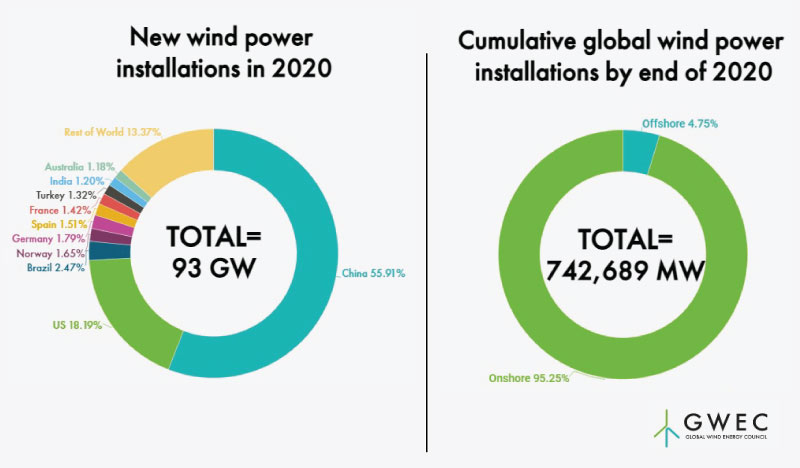 Highlights of the report

• Through technology innovations and economies of scale, the global wind power market has nearly quadrupled in size over the past decade and established itself as one of the most cost-competitive and resilient power sources across the world.

• On the regional level, 2020 was also a record year for onshore installations in Asia Pacific, North America and Latin America. The three regions combined installed a total of 74 GW of new onshore wind capacity last year, or 76 per cent more than the previous year.

• In the offshore market, 6.1 GW was commissioned worldwide last year, making 2020 the second-best year ever. China installed half of all new global offshore wind capacity in a record year.

• Today, there is 743 GW of wind power capacity worldwide, helping to avoid over 1.1 billion tonnes of CO2 globally – equivalent to the annual carbon emissions of South America.

• 2020 also saw milestone commitments to carbon neutrality, with the EU, Japan, South Korea, Canada and South Africa each pledging to reach net zero by 2050. Similar commitments were also made by major corporates including oil and gas companies.

• Combined with China’s net zero by 2060 target and the US intention to reach net zero by 2050 under the Biden administration, countries which have adopted or considered net zero targets now represent two-thirds of the global economy and 63 per cent of global greenhouse gases (GHG) emissions.

• However, the current rate of wind power deployment will not be enough to achieve carbon neutrality by the middle of this century, and urgent action must be taken by policymakers now to scale up wind power at the necessary pace.

• GWEC expects that over 469 GW of new capacity will be added in the next five years. That is nearly 94 GW of new installations each year until 2025. 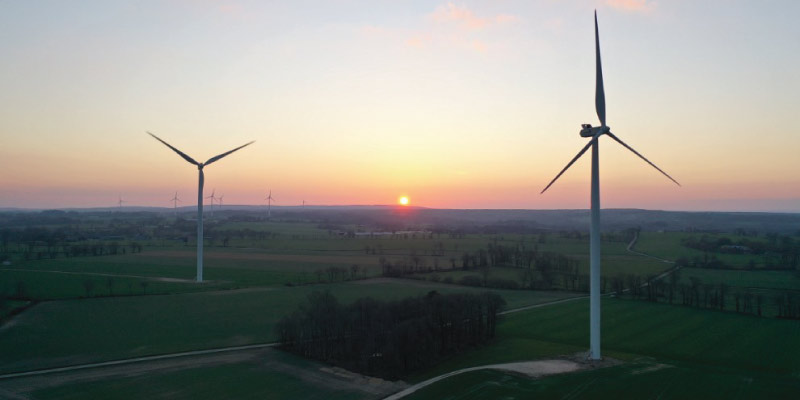 According to the scenarios that have been established by international energy bodies such as International Renewable Energy Agency (IRENA and) the International Energy Agency (IEA), the world needs to be installing a minimum of 180 GW of new wind energy every year to limit global warming to well below 2°C above pre-industrial levels, and will need to install up to 280 GW annually to maintain a pathway compliant with meeting net zero by 2050.

This means that the industry and policymakers need to work collaboratively and act fast to accelerate deployment.

The year 2021 must be the time to turn long-horizon net zero roadmaps into actions, via concrete policy interventions, interim target setting and robust delivery plans.

Wind energy will power the road to net zero, but to get there by mid-century requires credible and intensified efforts in the run-up to COP26 and ahead of the next deadline of Nationally Determined Contributions (NDCs) in 2025.

As a priority in the near term, the wind industry must work in tandem with its collaborators in the energy transition to increase national ambitions for renewables and raise awareness of their cross-cutting benefits for economies and people.

GWEC urges policymakers to take a true ‘climate emergency’ approach to allow a faster ramp up including:

• Eliminating red tape and reforming administrative structures in order to speed up and streamline licensing and permitting for projects.

• Carry out a massive increase in investments in grid, ports and other infrastructure needed to allow the ramp up in installations.

• Revamp energy markets to ensure that they account for the true social costs of polluting fossil fuels and facilitate a rapid transition to a system based on renewable energy. 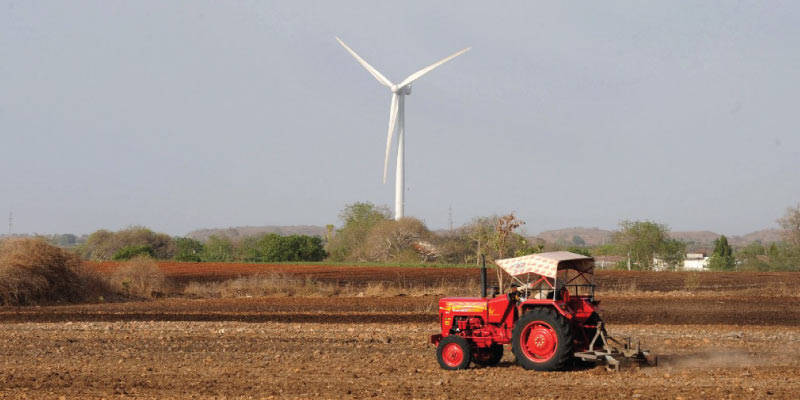 India is the world’s fourth-largest energy consumer behind China, the United States and the European Union.

India is the third-largest carbon emitter in the world after China and the US. India has refrained from setting a net zero target to date.

The country’s steeply rising power demand has largely been fuelled by coal-fired generation to date. But political shifts have directed India towards a clean energy transition since 2015, when India pledged an NDC of 33-35 per cent reduction in carbon emissions intensity of its economy by 2030 compared to 2005 levels.

It has pursued an ambitious palette of low-carbon programmes, including liberalisation reforms to the power sector, 24/7 green power, clean cooking and energy efficiency.

The government has also shared its vision for longer-term renewable energy targets of 450 GW by 2030, including 140 GW of wind. However, installations are falling short of the levels needed.

Reviving a long-term national mission to scale up wind and renewables by resolving these challenges, such as through increased government-industry coordination and knowledge-sharing, will provide a much-needed boost to the sector.

With wind and solar prices beating fossil fuel-based generation across India’s grid, the expansion of affordable renewables can support decarbonisation of energy intensive industries such as steel, iron, cement, transport and agriculture. 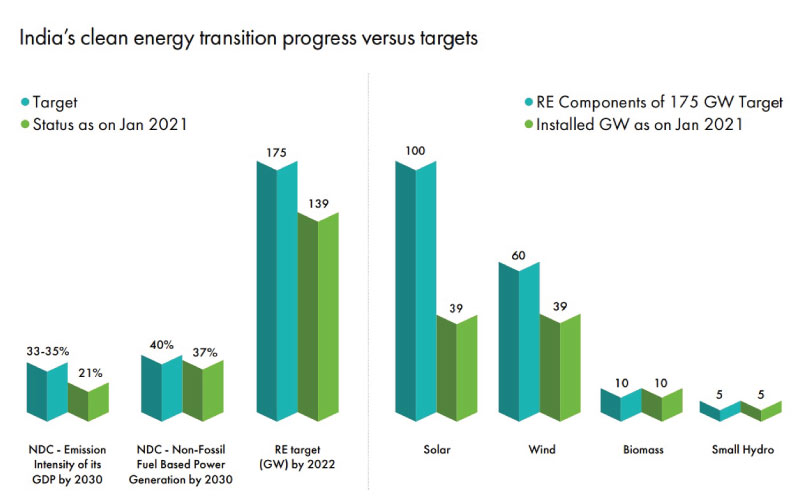 Via the National Electric Mobility Mission Plan 2020, the Modi administration has already enacted an aggressive electric and hybrid vehicle scheme and aims to shift railways from coal dependency to the world’s first net zero railway network by 2030.

The government has also announced that green hydrogen auctions will be launched in 2021.

Meeting India’s clean energy targets in the absence of a broader carbon neutrality strategy will require urgent and targeted implementation of regulatory reforms.

‘Aatmnirbharta’ (self-reliance) and ‘Make in India’ for energy security and supply chain competitiveness.

The development of offshore wind and green hydrogen capacity will further support India’s shift to a more flexible, resilient and clean energy system.