Iceland remains the most gender-equal country for the 12th time 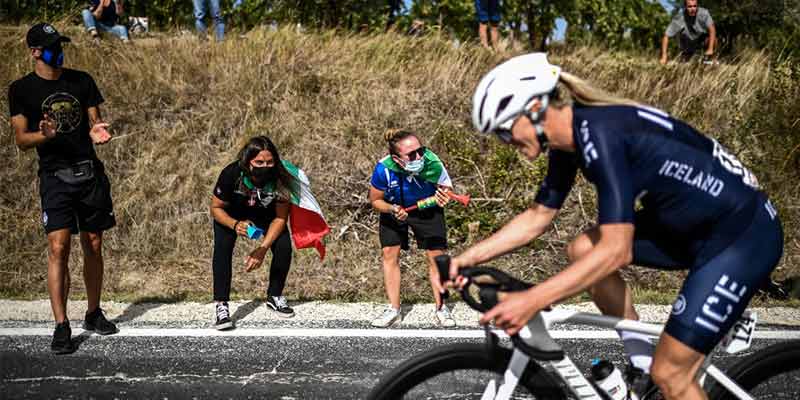 Women will not reach parity with men until the middle of the next century as the COVID-19 pandemic hits them hardest, according to a World Economic Forum (WEF) report.

Global Gender Gap Report 2021 estimated that the gender gap will not be closed for another 135.6 years, versus 99.5 years previously.

Progress towards gender parity is stalling in several large economies and industries. This is partly due to women being more frequently employed in sectors hardest hit by lockdowns combined with the additional pressures of providing care at home.

For the 12th time, Iceland is once again the most gender-equal country in the world.

India has slipped 28 places to rank 140th among 156 countries, becoming the third-worst performer in South Asia.

The Global Gender Gap Report is a publication of the World Economic Forum’s Centre for Shaping the Future of the New Economy and Society.

The Global Gender Gap Index benchmarks the evolution of gender-based gaps among four key dimensions (Economic Participation and Opportunity, Educational Attainment, Health and Survival, and Political Empowerment) and tracks progress towards closing these gaps over time.

This year, the Global Gender Gap index benchmarks 156 countries, providing a tool for cross-country comparison and to prioritise the most effective policies needed to close gender gaps.

The Global Gender Gap Index measures scores on a 0 to 100 scale and scores can be interpreted as the distance to parity (the percentage of the gender gap that has been closed). 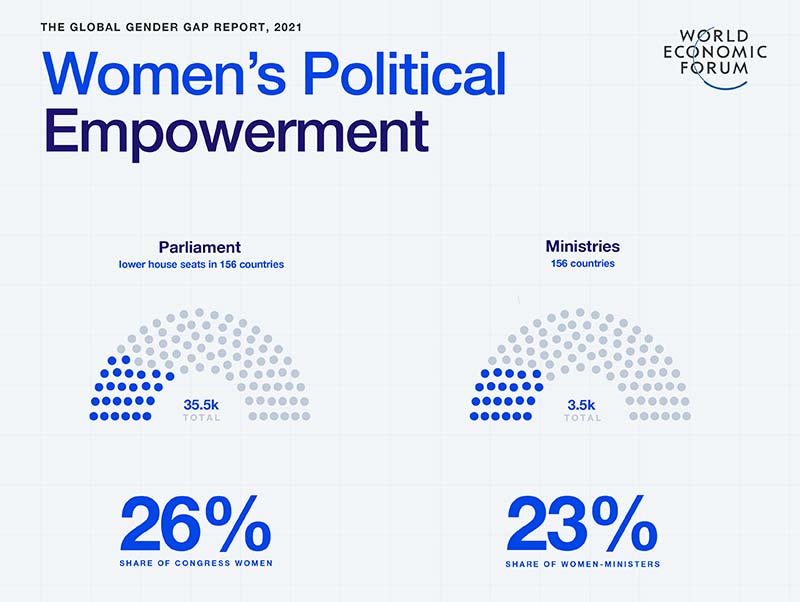 The gender gap in Political Empowerment remains the largest of the four gaps tracked, with only 22 per cent closed to date, having further widened since the 2020 edition of the report by 2.4 percentage points.

At the current rate of progress, the WEF estimates that it will take 145.5 years to attain gender parity in politics.

It remains the second-largest of the four key gaps tracked by the index.

According to this year’s index results, 58 per cent of this gap has been closed so far. The gap has seen marginal improvement since the 2020 edition of the report and as a result we estimate that it will take another 267.6 years to close.

The slow progress is the result of two opposing trends. On one hand, the proportion of women among skilled professionals continues to increase, as does progress towards wage equality, albeit at a slower pace. On the other hand, overall income disparities are still only part-way towards being bridged and there is a persistent lack of women in leadership positions, with women representing just 27 per cent of all manager positions.

The “glass ceiling” persists in some of the most advanced economies, including in the US, the UK, Italy and the Netherlands.

Sectors with historically low representation of women are also those with fast-growing “jobs of tomorrow”. In cloud computing, for example, women make up 14 per cent of the workforce; in engineering - 20 per cent; and in data and artificial intelligence - 32 per cent; and it is more difficult for women to switch into these emerging roles than men.

In Educational Attainment, 95 per cent of this gender gap has been closed globally, with 37 countries already at parity. However, the ‘last mile’ of progress is proceeding slowly.

The index estimates that on its current trajectory, it will take another 14.2 years to completely close this gap.

Gender Gap in Health and Survival

In Health and Survival, 96 per cent of this gender gap has been closed, registering a marginal decline since last year (not due to COVID-19), and the time to close this gap remains undefined.

For both education and health, while progress is higher than for economy and politics in the global data, there are important future implications of disruptions due to the pandemic, as well as continued variations in quality across income, geography, race and ethnicity. 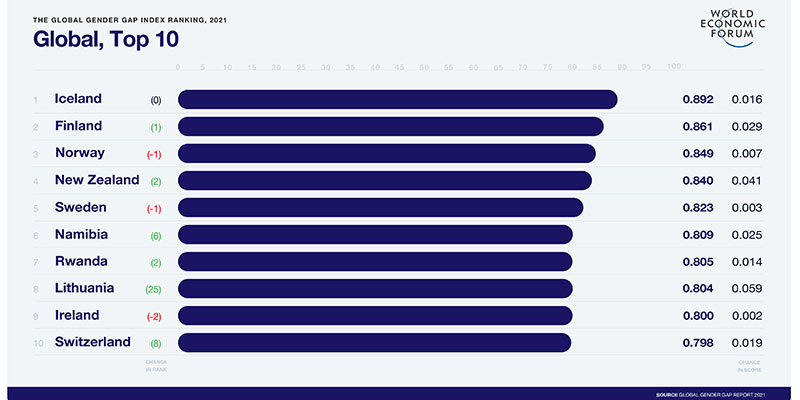 Iceland is the world’s best country for gender equality

Geographically, the global top 10 continues to be dominated by Nordic countries, with — Iceland, Norway, Finland and Sweden — in the top five.

Five countries, albeit starting from different levels of gender parity, have improved their score by at least 4.4 percentage points or more, qualifying as the five most-improved countries this year: Lithuania, Serbia, Timor-Leste, Togo and United Arab Emirates.

Iceland’s leadership in the rankings is driven by strong performance across all the four dimensions measured by the index, including having closed already 76 per cent of its Political Empowerment gap, the best performance in the world, while continuing to improve.

Iceland has in fact closed political gender gaps by another 5.9 percentage points since last year’s edition.

Further, 39.7 per cent of parliamentarians and 40 per cent of ministers in Iceland are women.

In addition to political gender gaps, Iceland has nearly closed its gender gap on the Health and Survival (96.4 per cent) and Educational Attainment (99.9 per cent) subindexes.

Finland – in second position – has leapfrogged Norway and has closed 86.1 per cent of the overall gender gap, up from 83.2 per cent in the previous edition. It has many women in ministerial positions and the prime minister in charge since 2019 is a woman. The country has also shown an increased presence of women in senior and managerial roles, where women currently represent 36.9 per cent of the total, an increase of about five percentage points. 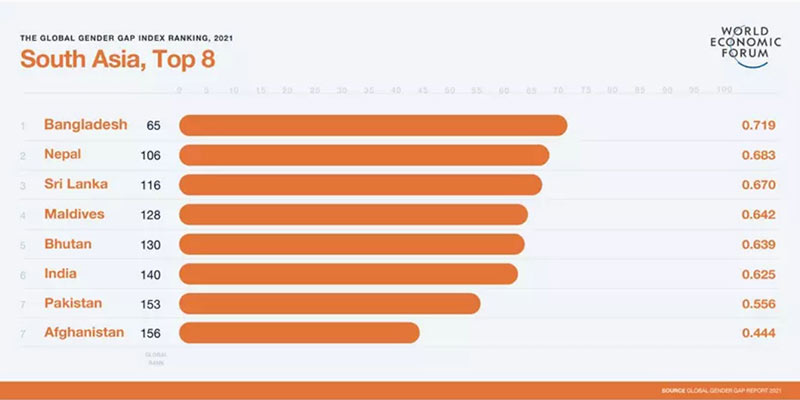 India is the third-worst performer in the South Asia region, having closed 62.5 per cent of its gap and ranks 140 globally. In South Asia, only Pakistan and Afghanistan ranked below India.

This gap is 4.2 percentage points larger than recorded in the previous edition, which explains why India has fallen 28 places in the ranking.

Political Empowerment: Most of the decline has occurred on the Political Empowerment subindex, where India has regressed 13.5 percentage points to reach a level of gap closed to date of just 27.6 per cent. The main change that took place this year is the significant decline in the share of women among ministers, which halved, from 23.1 per cent in 2019 to 9.1 per cent in 2021. The share of women in Parliament remains stagnant at 14.4 per cent.

Economic Participation and Opportunity: Decline also took place on the Economic Participation and Opportunity subindex, albeit to a lesser extent. India’s gender gap on this dimension widened by 3 per cent this year, leading to a 32.6 per cent gap closed to date. Among the drivers of this decline are a decrease in women’s labour force participation rate, which fell from 24.8 per cent to 22.3 per cent. In addition, the share of women in professional and technical roles declined further to 29.2 per cent. The share of women in senior and managerial positions also remains low: only 14.6 per cent of these positions are held by women and there are only 8.9 per cent of firms with female top managers. Further, women’s estimated earned income is only one-fifth of men’s, which puts India among the bottom 10 globally on this indicator.

Health and Survival: Discrimination against women is also reflected in Health and Survival subindex statistics. With 93.7 per cent of this gap closed to date, India ranks among the bottom five countries in this subindex. Wide sex ratio at birth gaps are due to high incidence of genderbased sex-selective practices. In addition, more than one in four women has faced intimate violence in her lifetime. 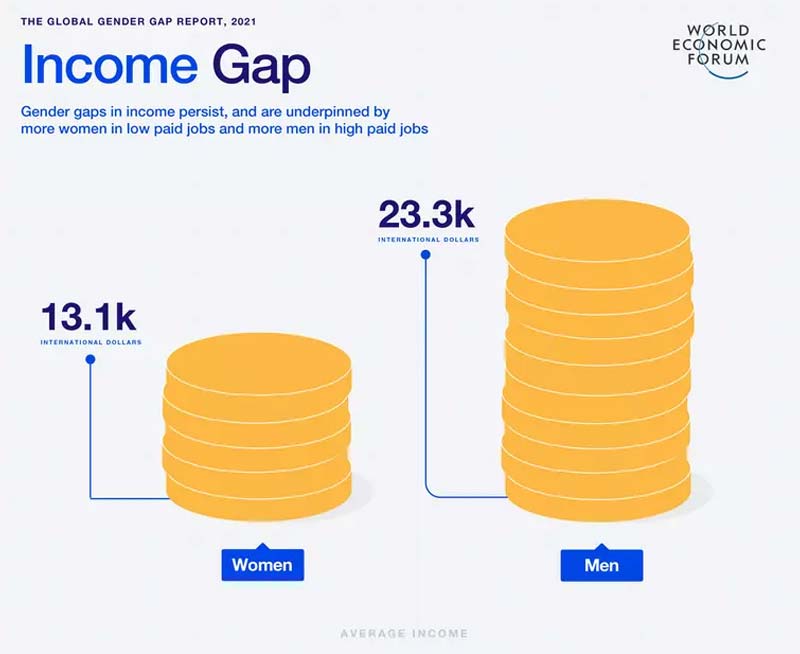 How to shape a gender equal recovery?

Early trends from the pandemic-scarred labour market signal a variety of emerging and pre-existing challenges for advancing gender parity.

Looking ahead towards a gender-positive recovery, it is possible to design systems and policies which boost gender parity in economic participation in the recovery phase, avoid scarring of the pandemic becoming permanent, and create more resilient socio-economic systems.

1) Investments in the care sector

Investments are needed in the care sector and for equitable access to care leave for men and women.

The care sector in many economies remains poorly funded, partially informal in nature and providing low wages. This underinvestment reflects the common misconception that care work is “low productivity” or “free” work – ignoring the substantial impact of this sector on human capital development across age ranges and its potential to create jobs.

Investment in the care sector should be a priority not only for governments looking for a strong return on investment in their fiscal recovery package, but also for innovators looking to apply themselves to impactful socio-economic challenges.

Policies and practices need to proactively focus on overcoming occupational segregation by gender. The recovery should usher the way for re-deploying and re-employing women in emerging jobs – a target that will require focused efforts to overcome the trend towards occupational segregation by gender and proactively strengthen the pipeline of women prepared for the emerging jobs of tomorrow.

Gender parity should thus be a key principle for organisations setting in place an effective future of work strategy.

Effective mid-career reskilling policies, combined with managerial practices which embed sound, unbiased hiring and promotion practices, will pave the way for a more gender-equal future of work. Effective mid-career reskilling policies will also be an important mechanism for developing and deploying female workers into previously male-dominated growing professions. Such policies will not prove sufficient on their own accord. They must be matched to business cultures and structures which embrace diversity, equity and inclusion.