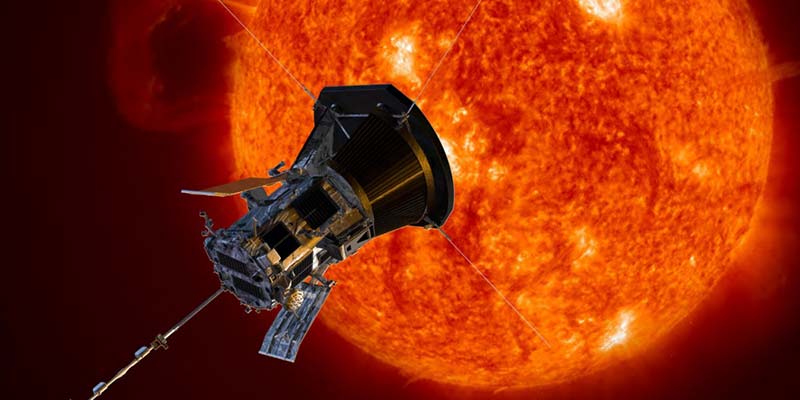 • For the first time in history, NASA’s spacecraft — Parker Solar Probe — has flown through the Sun’s upper atmosphere and sampled particles and magnetic fields there.

• The new milestone marks one major step for Parker Solar Probe and one giant leap for solar science.

• Just as landing on the Moon allowed scientists to understand how it was formed, touching the very stuff the Sun is made of will help scientists uncover critical information about our closest star and its influence on the solar system.

• Parker Solar Probe was launched in August 2018 to explore the mysteries of the Sun by traveling closer to it than any spacecraft before.

• Parker Solar Probe is part of NASA’s Living with a Star programme to explore aspects of the Sun-Earth system that directly affect life and society.

• The mission is named for Eugene Parker, the physicist who first theorized the existence of the solar wind in 1958. It’s the first NASA mission to be named for a living researcher.

• Parker Solar Probe is relatively small, about the size of a small car.

• It uses seven Venus flybys over nearly seven years to gradually shrink its orbit around the Sun, coming as close as 3.83 million miles (and 6.16 million kilometers) to the Sun, well within the orbit of Mercury and about seven times closer than any spacecraft has come before.

• To perform unprecedented investigations, the spacecraft and instruments are protected from the Sun’s heat by a 4.5-inch-thick carbon-composite shield, which will withstand temperatures of nearly 2,500 degrees Fahrenheit.

• Flying into the outermost part of the Sun's atmosphere, known as the corona, for the first time, Parker Solar Probe employs a combination of in situ measurements and imaging to revolutionise our understanding of the corona and expand our knowledge of the origin and evolution of the solar wind.

• Parker will keep drawing ever closer to the Sun and diving deeper into the corona until its grand finale orbit in 2025.

Significance of the mission

• Unlike Earth, the Sun doesn’t have a solid surface. But it does have a superheated atmosphere, made of solar material bound to the Sun by gravity and magnetic forces. As rising heat and pressure push that material away from the Sun, it reaches a point where gravity and magnetic fields are too weak to contain it.

• That point, known as the Alfvén critical surface, marks the end of the solar atmosphere and beginning of the solar wind. Solar material with the energy to make it across that boundary becomes the solar wind, which drags the magnetic field of the Sun with it as it races across the solar system, to Earth and beyond.

• Importantly, beyond the Alfvén critical surface, the solar wind moves so fast that waves within the wind cannot ever travel fast enough to make it back to the Sun – severing their connection.

• Until now, researchers were unsure exactly where the Alfvén critical surface lay. Based on remote images of the corona, estimates had put it somewhere between 10 to 20 solar radii from the surface of the Sun – 4.3 to 8.6 million miles.

• Parker’s spiral trajectory brings it slowly closer to the Sun and during the last few passes, the spacecraft was consistently below 20 solar radii (91 percent of Earth’s distance from the Sun), putting it in the position to cross the boundary – if the estimates were correct.

• On April 28, 2021, during its eighth flyby of the Sun, Parker Solar Probe encountered the specific magnetic and particle conditions at 18.8 solar radii (around 8.1 million miles) above the solar surface that told scientists it had crossed the Alfvén critical surface for the first time and finally entered the solar atmosphere.

• The first passage through the corona – and the promise of more flybys to come – will continue to provide data on phenomena that are impossible to study from afar.

• As it circles closer to the solar surface, Parker is making new discoveries that other spacecraft were too far away to see, including from within the solar wind – the flow of particles from the Sun that can influence us at Earth.

• In 2019, Parker discovered that magnetic zig-zag structures in the solar wind, called switchbacks, are plentiful close to the Sun. But how and where they form remained a mystery. Halving the distance to the Sun since then, Parker Solar Probe has now passed close enough to identify one place where they originate — the solar surface.

• The size of the corona is also driven by solar activity. As the Sun’s 11-year activity cycle – the solar cycle – ramps up, the outer edge of the corona will expand, giving Parker Solar Probe a greater chance of being inside the corona for longer periods of time.