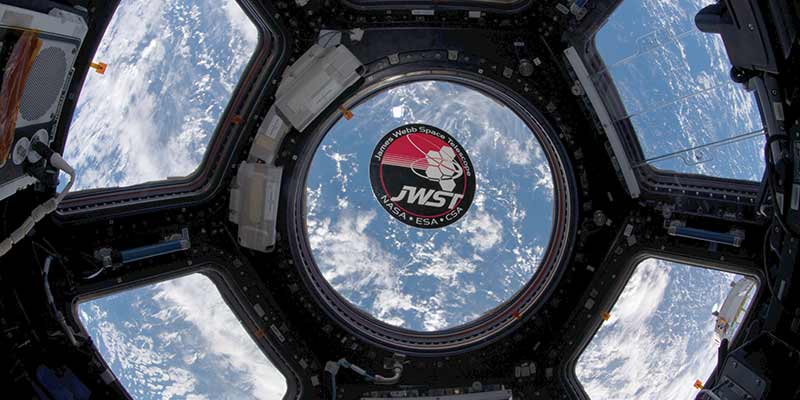 • It is designed to answer fundamental questions about the universe and to make breakthrough discoveries in all fields of astronomy.

• A joint effort with ESA (European Space Agency) and the Canadian Space Agency, the Webb observatory is NASA’s revolutionary flagship mission to seek the light from the first galaxies in the early universe and to explore our own solar system, as well as planets orbiting other stars, called exoplanets.

• The world’s largest and most complex space science observatory began six months of commissioning in space. At the end of commissioning, JWST will deliver its first images.

• JWST carries four state-of-the-art science instruments with highly sensitive infrared detectors of unprecedented resolution. It will study infrared light from celestial objects with much greater clarity than ever before.

• JWST is the scientific successor to the iconic Hubble and Spitzer space telescopes. It is built to complement and further the discoveries of Hubble, Spitzer, and other NASA missions by accessing the near infrared and mid-infrared wavelengths with unprecedented resolution.

• It is named after NASA’s second administrator, James E. Webb, who headed the agency during part of the Apollo era, from February 1961 to October 1968. The mission was previously known as the Next Generation Space Telescope (NGST).

• JWST is about 100 times more sensitive than Hubble and is expected to transform understanding of the universe and our place in it.

What is the scope of the James Webb Space Telescope?

• The mission has been developed over two decades, with contributions from thousands of scientists, engineers, and other professionals from more than 14 countries.

• The telescope’s revolutionary technology will explore every phase of cosmic history – from within our solar system to the most distant observable galaxies in the early universe, to everything in between.

• JWST will reveal new and unexpected discoveries and help humanity understand the origins of the universe and our place in it.

• It can observe all of the cosmos, from planets to stars to nebulae to galaxies and beyond – helping scientists uncover secrets of the distant universe as well as exoplanets closer to home.

• It can explore our own solar system’s residents with exquisite new detail and search for faint signals from the first galaxies ever made. From new forming stars to devouring black holes, JWST will reveal all this and more. 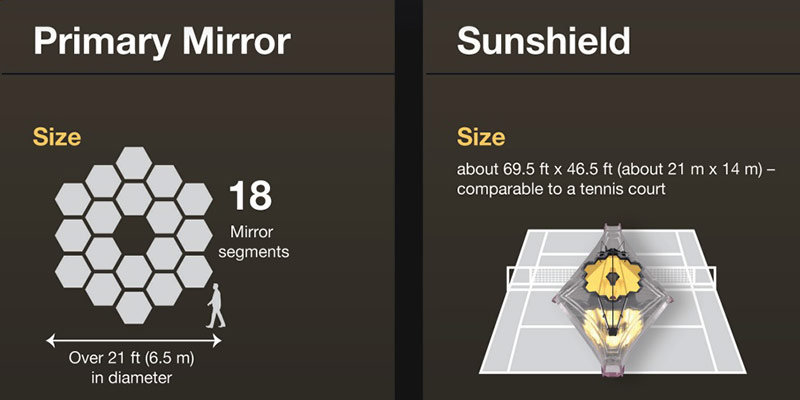 What are the components of JWST?

• JWST is engineered to build upon the groundbreaking discoveries of other spacecraft, such as the Hubble Space Telescope and the the Spitzer Space Telescope. While Hubble views the universe in visible and ultraviolet light, JWST focuses on infrared, a wavelength important for peering through gas and dust to see distant objects.

• One of JWST’s main components is the sunshield, a diamond-shaped structure roughly the area of a tennis court. It was carefully folded and packed to fit inside Webb’s launch vehicle. In space, the sunshield will expand, tension, and separate into its five distinct layers.

• The sunshield will keep the telescope in perpetual shadow for operations at –233°C, to prevent the telescope’s own infrared emission from overwhelming the signals from the astronomical targets.

• The telescope’s primary mirror is made of 18 hexagonal-shaped mirror segments, each 1.32 metres in diameter and weighing approximately 20 kilograms. The total diameter of JWST’s primary mirror spans 6.5 metres, which is so large that it has to be carefully folded into the rocket’s fairing for launch. Each of the telescope’s mirrors is covered in a microscopically thin layer of gold, which optimises them for reflecting infrared light – the main wavelength of light this telescope will observe. 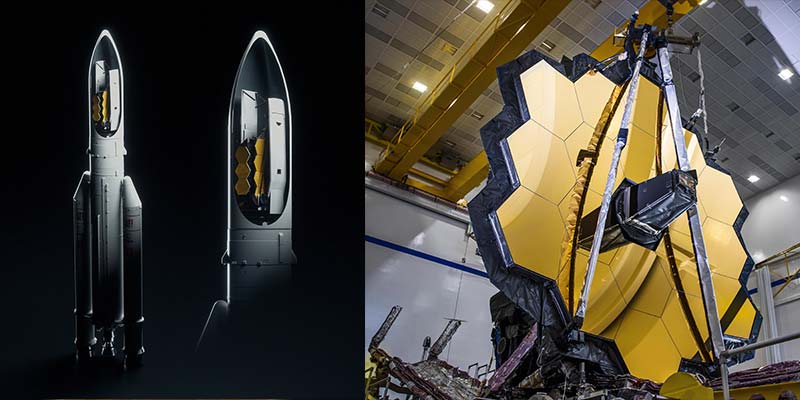 • It will be the largest mirror ever flown into space.

• This complex deployment sequence has never been attempted for a space telescope, and the amazing engineering that enabled JWST includes many innovations that push the boundaries of technology.

• JWST’s state-of-the-art scientific instruments are engineered to produce a treasure trove of awe-inspiring imagery and data. The instrument complement includes powerful cameras, coronagraphs, and spectrographs that will provide scientists with the data they need to analyse the materials that make up stars, nebulae, galaxies and the atmospheres of planets.

The instruments primarily have two functions:

2) Spectroscopy, or breaking down light into separate wavelengths – like raindrops create a rainbow – to determine the physical and chemical properties of various forms of cosmic matter. 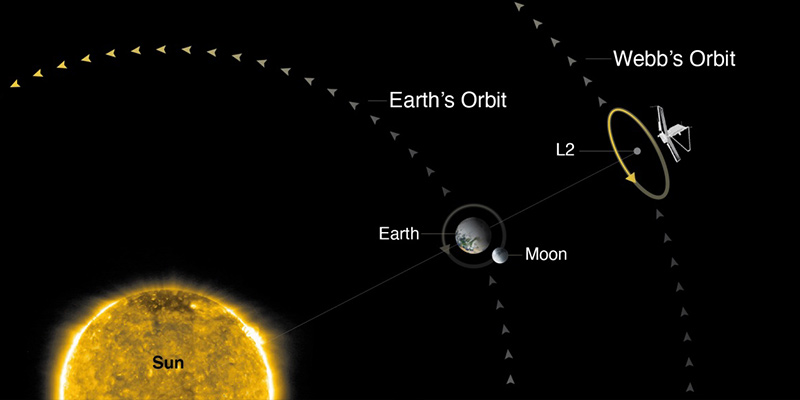 The orbit of JWST

• Located about a million miles (1.5 million kilometers) directly “behind” the Earth as viewed from the Sun, the second Lagrange point is an ideal location for astronomy and has been home to previous missions.

• From launch to its final destination at the second Lagrange point (L2), JWST’s journey spans about a month. Once there, JWST’s orbit follows a special path around L2 that allows it to stay on Earth’s night side and track along with Earth while moving around the Sun.

• As an infrared observatory, JWST must be protected from all bright, hot sources in order to see the faint heat signals of distant objects in the universe. Because JWST will always stay on Earth’s night side as it moves around the Sun, its orbit ensures that one side of its sunshield will continuously face the Sun, Earth, and Moon to block their view from the telescope’s optics.

Notes
Hubble Space Telescope Named in honour of the trailblazing astronomer Edwin Hubble, the Hubble Space Telescope is a large, space-based observatory, which has revolutionised astronomy since its launch and deployment by the space shuttle Discovery in 1990. Far above rain clouds, light pollution, and atmospheric distortions, Hubble has a crystal-clear view of the universe. Scientists have used Hubble to observe some of the most distant stars and galaxies yet seen, as well as the planets in our solar system.
Related Topics
RELATED STORIES