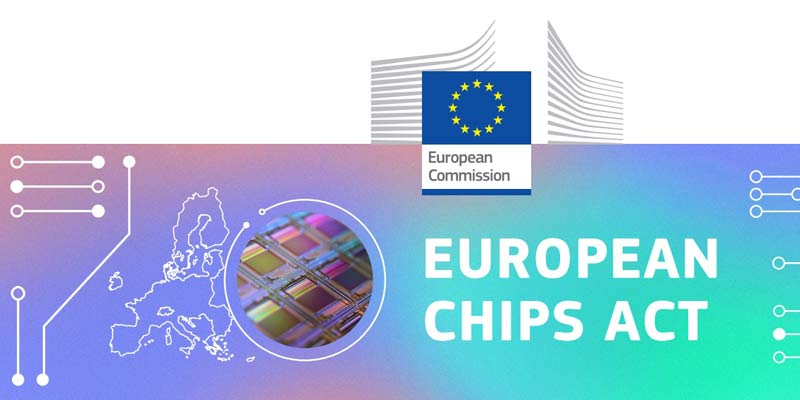 • The European Commission has proposed a €43 billion plan to become a major microchip producer to try to curb its dependency on Asian markets.

• Semiconductors — also known as chips — are strategic assets for key industrial value chains. With the digital transformation, new markets for the chip industry are emerging such as highly automated cars, cloud, Internet of Things, connectivity, space, defence and supercomputers. An extended shortage has highlighted the importance of chipmakers, most of which are based in Asia, to global supply chains.

• The 27-nation bloc is moving to boost its economic self-sufficiency in the critical semiconductor sector with its Chips Act.

• The EU move mirrors President Joe Biden’s $52 billion push to invest in a national chip-producing sector to make sure more production occurs in the United States.

• Over the past year, there has been a supply chain bottleneck for semiconductors that go into everything from passenger cars to entertainment products. In Europe, some consumers have had to wait nearly a year to get a car because of lack of spare parts.

• The European Parliament and the Member States will now discuss the Commission’s proposals for a regulation on European Chips Act in the ordinary legislative procedure. Once adopted, the Regulation will be directly applicable across the EU.

• Semiconductor chips are the essential building blocks of digital and digitised products. From smartphones and cars, through critical applications and infrastructures for healthcare, energy, communications and industrial automation, chips are central to the modern digital economy.

• In 2020, more than 1 trillion microchips were manufactured around the world, about 130 chips for every person on earth. However, the EU has only roughly 10 per cent of global market share and is heavily dependent on third-country suppliers.

• The COVID-19 pandemic has exposed a weakness in the ecosystem within both Europe and other regions in the world experiencing significant shortages of chips.

• Recent global semiconductors shortages forced factory closures in a wide range of sectors from cars to healthcare devices. In the car sector, for example, production in some European countries decreased by one-third in 2021. This made more evident the extreme global dependency of the semiconductor value chain on a very limited number of actors in a complex geopolitical context. But it also illustrated the importance of semiconductors for the entire European industry and society.

• The EU is home to world-leading research and technology organisations  and many excellent universities and research institutes spread across the Union. These are pioneering the techniques behind the production of some of the world’s most advanced chips.

• Despite these strengths, Europe has an overall global semiconductors production market share of less than 10 per cent and is heavily dependent on third-country suppliers. In case of severe disruption of the global supply chain, Europe’s chips reserves in some industrial sectors could run out in a few weeks, bringing many European industries to a standstill.

• As the digital transformation accelerates and penetrates every part of society, industrial needs for chips are set to increase, opening new market opportunities. 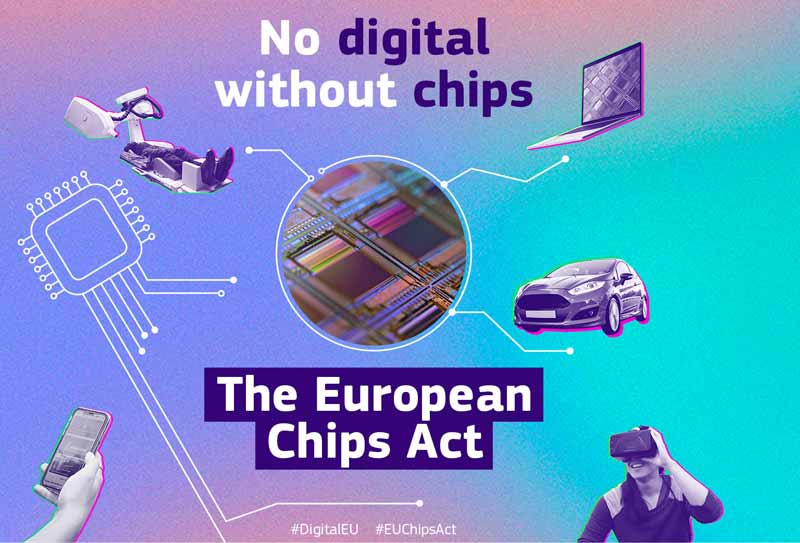 • In her 2021 State of the Union speech, European Commission President Ursula von der Leyen set the vision for Europe’s chip strategy, to jointly create a state-of-the-art European chip ecosystem, including production, as well as link together the EU’s world-class research, design and testing capacities.

• The European Chips Act aims to ensure that the EU has the necessary tools, skills and technological capabilities to become a leader in this field beyond research and technology in design, manufacturing and packaging of advanced chips, to secure its supply of semiconductors and to reduce its dependencies.

• It will mobilise more than €43 billion of public and private investments and set measures to prevent, prepare, anticipate and swiftly respond to any future supply chain disruption, together with Member States and international partners.

• It will enable the EU to reach its ambition to double its current market share to 20 per cent in 2030.

Objectives of the Chips Act:

• Build and reinforce capacity to innovate in the design, manufacturing and packaging of advanced chips.

• Put in place a framework to increase production capacity to 20 per cent of the global market by 2030.

• Develop an in-depth understanding of the global semiconductor supply chains.

• Address the skills shortage, attract new talent and support the emergence of a skilled workforce.

How will the European Chips Act address current problems?

• In the short term, the toolbox set out in the recommendation will immediately enable the coordination between the Member States and the Commission. The crisis response toolbox within the EU Chips Act would give the EU the necessary means to address possible sudden changes in the political situation or unforeseen crises and, in the last resort, to ensure Europe’s overall resilience.

• In the medium term, the Chips Act will strengthen manufacturing activities in the Union and support the scale-up and innovation of the whole value chain, addressing security of supply and a more resilient ecosystem.

• In the long-term, it will maintain Europe’s technological leadership while preparing the required technological capabilities that would support transfer of knowledge from the lab to the fab and position Europe as a technology leader in innovative downstream markets.

The Union Cabinet approved a Rs 76,000 crore policy boost for semiconductor and display manufacturing ecosystem in a bid to position India as a global hub for hi-tech production. The semiconductor programme is different from the production-linked incentive (PLI) scheme that the government has launched earlier. The programme aims to provide attractive incentive support to companies / consortia that are engaged in silicon semiconductor fabrication units (fabs), display fabs, compound semiconductors / silicon photonics / sensors (including MEMS) fabs, semiconductor packaging, semiconductor design.