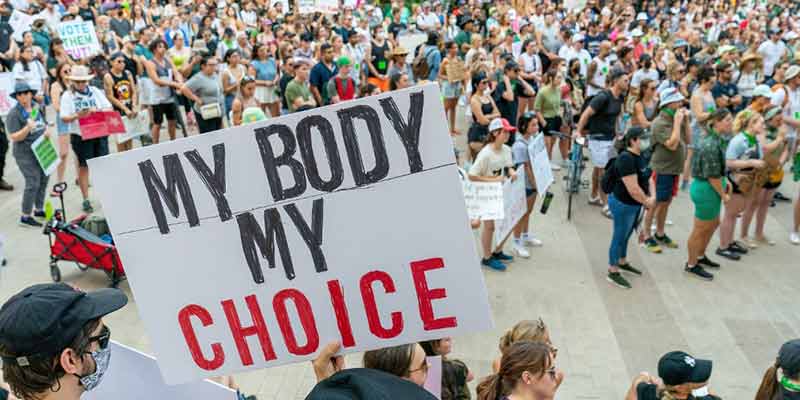 Back in 1973, the landmark judgment of Roe v Wade by the US Supreme Court declared the restrictive state regulation or interference in abortions unconstitutional.

The ruling came after Norma McCorvey (referred to as “Jane Roe” to protect her identity), an adolescent, single and pregnant woman from Texas, challenged the abortion law in the state in 1969.

The case was fought by District Attorney Henry Wade (“Wade”), who represented the government of the state of Texas. While McCorvey demanded an absolute right over her abortion and reproductive choices, the court struck a balance between allowing states to regulate this as well as Roe’s right to privacy.

This filing was accompanied by two companion complaints – one – from another pregnant Georgia woman, Sandra Cano (“Mary Doe”) and second — a physician James Hallford — both of which sought clarifications on the statutes on abortions.

While both Roe and Doe together put focus on a woman’s well-being in continuing a pregnancy but also hail those psychological, emotional, familial and age-related factors that are crucial to the expecting mother’s health.

At this point, it is essential to note that the granting of abortion control was not done in lieu of granting new ‘reproductive rights’ but instead as an attempt to protect ‘privacy’. The US did not have a dedicated law that grants its citizens an explicit right to privacy but is rather carved out of the Fourth, Ninth and Fourteenth amendments.

It emphasised that no state legislation could prohibit or impose an undue burden on women in her access to abortive care until foetal viability (23-24 weeks of pregnancy). Together with Roe, these formed the pillars of all subsequent abortion jurisprudence.

Why did the Supreme Court revisit Roe v Wade?

Roe v Wade was one of the most polarising verdicts in the US. By the 1980s, it triggered global discussions on the concepts of bodily autonomy — dividing the conversation into a pro-choice and pro-life international debate. Leaders in the US have been historically divided on this debate – creating  a vital political and election agenda.

The overturning of this ruling was in planning ever since Donald Trump entered the White House. A loud pro-life campaigner, Trump had well established his intentions to tear down this decision way back in 2016. With the nomination of Amy Barrett as the Associate Justice of the US Supreme Court, Trump ensured that the Court was comfortably conservatively inclined by 2020 to overturn this decision. In 2021, almost 90 anti-abortion legislatures were passed across states in America, all in anticipation of the fall of Roe.

Both Casey and Roe were based on the argument that abortion is a crucial element protected by the right to liberty enshrined in the Fourteenth Amendment, stating that – “…nor shall any state deprive any person of life, liberty, or property, without due process of law”.

This placed topics such as abortion, family planning and marriage outside the purview of the government’s interference. But in 2018, the Dobbs v Jackson Women’s Health Organisation was filed which, for the first time ever, raised questions on pre-viability abortions. The state of Mississippi bans abortions after 15 weeks, which clearly contrasts federal law.

Now, almost 50 years later, on June 24, the US Supreme Court has again created history by breaking down the Roe v Wade judgment. The Court stated – “the Constitution does not confer a right to abortion; Roe and Casey are overruled, and the authority to regulate abortions is returned to people and their elected representatives.” 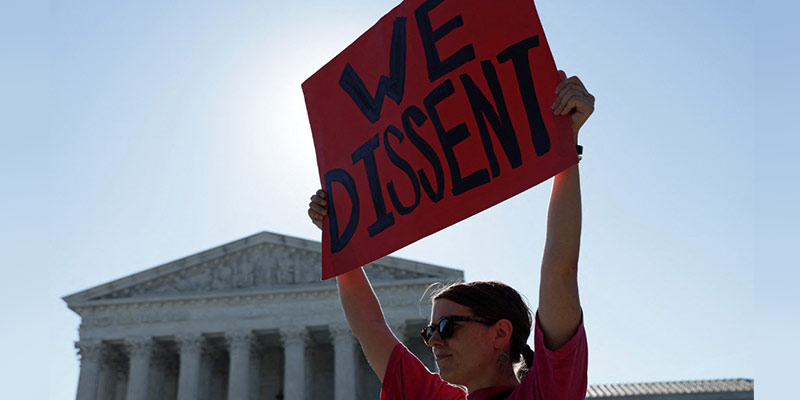 The aftermath of the SC verdict

With the undoing of that monumental judgment, it is strongly predicted that at least 26 states will ban abortions and enforce criminal action to the pregnant person or/and the medical practitioner who is part of the process.

Some states like Texas, which have historically been conservative, even initiated rulings which allow private citizens to sue pregnant persons and earn monetary rewards – virtually instigating a witch hunt against them.

Georgia and Idaho passed a ‘foetal heartbeat law’ which bans any medical termination once foetal heartbeat can be detected – which can be as early as 6-8 weeks in a pregnancy. On the other hand, women typically become aware of their pregnancies at about the same time, 5 weeks or later – noticed after a missed menstrual period.

On the contrary, these are time-sensitive, emotionally and physically challenging and heavily dependent on state laws – all of which when put together amidst a viral pandemic, can be highly stressful for a pregnant person.

The Guttmacher Institute, a leading US think tank focusing on women’s reproductive health, reported that over 33 per cent of women faced increased obstacles in accessing reproductive and family planning care. Several restrictions were placed in accessing medicated abortion – drug deliveries and purchase or tele-health guidance. The statistics are much worse for racial and sexual minorities.

This has had direct implications on vital indicators like maternal mortality ratio, which has seen a drastic increase from 14 per 100,000 live births in 1990 to 30 in 2017. This makes the US among the worst-performing high-income nations in health care. 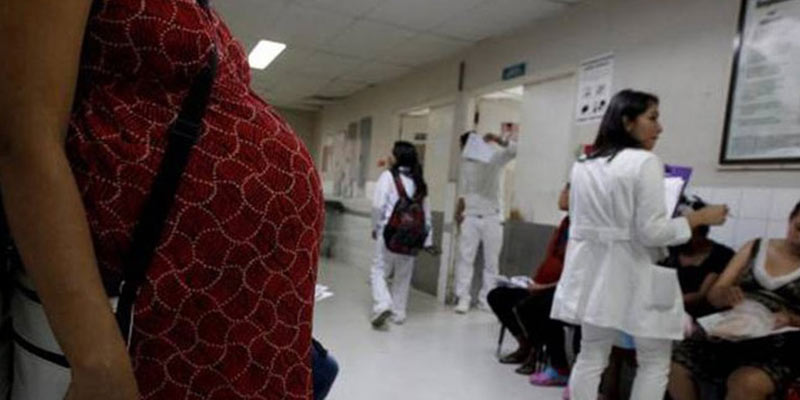 What is the scenario in India?

India’s earliest reproductive laws date back to 1971 – even before Roe v Wade came into existence. But experts theorise that the driver of such a law in India was population control and not about granting bodily autonomy to women. But the law was pioneering as it introduced abortions in any form.

With the amendment to this law passed on March 16, 2021, the window for abortion was further increased. Now any woman (married or unmarried) can get a physician-monitored termination up to 20 weeks with the opinion of one registered medical practitioner and up to 24 weeks for special categories of pregnant women, such as rape or incest survivors, with approval of two registered doctors. The upper gestational limit of 24 weeks also does not apply for substantial foetal abnormalities.

Several positive steps are made through the law but availability should not be equated with empowerment or accessibility.

While the law aims to empower women’s choices – it is still embedded in the idea that only a doctor should decide the future of a woman’s pregnancy. It assigns medical practitioners utmost power – even in non-life-threatening circumstances.

Further, due to the stark rural-urban and inter-regional differences, women’s experiences may differ. Confidentiality too, although a full cover from private individuals is mentioned, gynaecology clinics have broken doctor-patient privilege in the past eventually hurting the patients’ physical and mental health and hence are looked upon doubtfully.

As a developing nation, India continues to grapple with rigid patriarchal systems in place which prescribe women’s behaviours, attitudes and life choices. These severely worsen women’s access to health services – burdening it with taboo, moral policing on pre-marital sex and untethered sale of medicated abortion drugs.

There have been a significant number of instances where unaccompanied, unmarried women were harassed by hospital staff or registered doctors for accessing contraceptive products and sexual health check-ups. This can be further substantiated by government data wherein, according to the National Family Health Survey-5 (2019-21), 9.4% of women face some form of unmet need for contraception.

Therefore, the rejoice on India’s ‘progressive’ abortion laws is only half-cooked. The limited reach for government programmes at the grassroots-level and the patriarchal socio-cultural conditioning of the service providers are big challenges.

Despite comparatively less restrictive laws than the US, India’s maternal mortality ratio was 113 per 100,000 live births in 2016-18 and at least eight women die daily from unsafe abortions.

Abortion continues to be among the most severely State-regulated procedures in many parts of the world. But this is the first time a country as powerful and supposedly modern as the US has taken such a drastic stance.

This will initiate debates on abortion, privacy and autonomy globally, but one should always prepare for unforeseen ripple effect of this change. In a post-pandemic world, where recovery for women and vulnerable communities is inequitable already, banning access to basic health right will further push downward global advancements in SDG 6.

Access to safe sexual and reproductive health is no less than a human right for women. While politics has greatly influenced the future of women’s health and lifecycle, it should have been led by women with their health right in the epicentre.

(Mona is a Junior Fellow at Observer Research Foundation. The views expressed here are personal.)