India to surpass China as most populous country in 2023

• The global population is growing at its slowest rate since 1950, having fallen under 1 per cent in 2020.

• The latest projections by the United Nations suggest that the world’s population could grow to around 8.5 billion in 2030 and 9.7 billion in 2050. It is projected to reach a peak of around 10.4 billion people during the 2080s and to remain at that level until 2100.

• Globally, the world counts slightly more men (50.3 per cent) than women (49.7 per cent) in 2022. This figure is projected to slowly invert over the course of the century. By 2050, it is expected that the number of women will equal the number of men.

World Population Prospects 2022 is the 27th edition of the official United Nations population estimates and projections. It presents population estimates from 1950 to the present for 237 countries or areas, underpinned by analyses of historical demographic trends. This latest assessment considers the results of 1,758 national population censuses conducted between 1950 and 2022, as well as information from vital registration systems and from 2,890 nationally representative sample surveys.

The 2022 revision also presents population projections to the year 2100 that reflect a range of plausible outcomes at the global, regional and national levels. For the first time, the estimates and projections are presented in one-year intervals of age and time instead of the five-year intervals used previously.

The need for understanding population trends

• Understanding population trends and anticipating demographic change are crucial for national development planning and for implementing the 2030 Agenda for Sustainable Development.

• The 2030 Agenda emphasizes that people are at the centre of sustainable development, echoing the ideals set forth in the Programme of Action of the International Conference on Population and Development (ICPD) adopted in Cairo in 1994.

• Recent demographic trends are harbingers of future challenges to achieving the SDGs. For example, countries experiencing rapid population growth, most of which are in sub-Saharan Africa, must provide schooling and health care to growing numbers of children, and ensure quality education and employment opportunities to increasing numbers of youth.

• Countries, where population growth has slowed or stopped, must prepare for an increasing proportion of older persons and, in some cases, decreasing population size.

• Countries where fertility levels remain high should prepare to meet the needs of growing numbers of children and young people. Countries where a decline in fertility is creating an opportunity for a demographic dividend need to invest in human capital by ensuring access to health care and quality education at all ages and opportunities for productive employment.

• These and other challenges can be addressed in part by responding to future demographic trends and incorporating that information into policies and planning.

• Given its reliance on assumptions at the country level about the two components of global population growth — fertility and mortality — the projection of the global population is inherently uncertain, and it typically becomes more uncertain over time.

• However, the size of the world population in the near future is relatively certain because the size and age structure of the population over the next few decades are largely the result of demographic processes that have already taken place in the recent past. 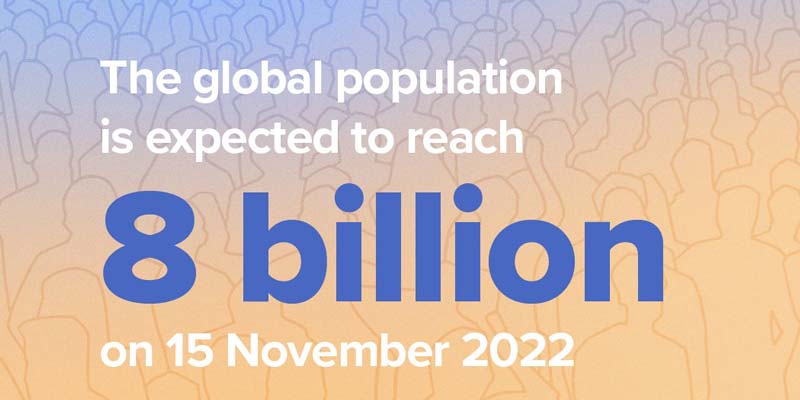 • Today, the world’s population is more than three times larger than it was in the mid-twentieth century. The global human population will reach eight  billion in mid-November 2022 from an estimated 2.5 billion people in 1950, adding one billion people since 2010 and two billion since 1998. It took around 37 years since 1950 for human numbers to double, surpassing five  billion inhabitants in 1987.

• Thereafter, it is estimated that more than 70 years will be required for the global population to double again, rising to over 10 billion by 2059.

• Over the one hundred years from 1950 to 2050, the world population was growing the fastest in the period 1962-1965, when it was increasing on average by 2.1 per cent per year. Since then, the pace of population growth has slowed by more than half owing to reduced levels of fertility.

• In 2020, and for the first time since 1950, the rate of population growth fell below 1 per cent per year and it is projected to continue to slow in the next few decades and through the end of this century.

• The global population is still growing, albeit at a reduced rate. Some countries and regions continue to experience further population growth, while others have witnessed a stabilisation or begun to decrease in population size.

• The world’s two most populous regions in 2022 were Eastern and South-Eastern Asia, with 2.3 billion people, representing 29 per cent of the global population, and Central and Southern Asia, with 2.1 billion (26 per cent).

• China and India accounted for the largest populations in these regions, with more than 1.4 billion each in 2022.

• India is projected to surpass China as the world’s most populous country during 2023.

• In the next three decades, the regions of the world will experience different growth rates of their populations. Consequently, the regional distribution of the population in 2050 will significantly differ from that of today.

• Central and Southern Asia is expected to become the most populous region in the world by 2037 as the population of Eastern and South-Eastern Asia could start declining by the mid-2030s.

• More than half of the projected increase in global population up to 2050 will be concentrated in just eight countries: the Democratic Republic of the Congo, Egypt, Ethiopia, India, Nigeria, Pakistan, the Philippines and the United Republic of Tanzania.

• The population of Europe and Northern America combined and that of sub-Saharan Africa were comparable in size in 2022, with more than 1.1 and 1.2 billion people respectively. However, these two regions have reached such population size as a result of very different growth trajectories since the mid-20th century.

• Trends in population size and age structure are shaped mostly by levels of fertility and mortality, which have declined almost universally around the globe.

• In some countries, international migration also has become an important determinant of population change.

• The fertility level, or the average number of births per woman over a lifetime, has fallen markedly over recent decades in many countries. Two-thirds of all people globally live in a country or area where fertility is below 2.1 births per woman, which is roughly the level required for populations with low mortality to stabilize in the long run.

• A sustained drop in fertility leads to an increased concentration of the population at working ages, creating an opportunity for accelerated economic growth per capita.

• In most countries of sub-Saharan Africa, as well as in parts of Asia and Latin America and the Caribbean, the share of population at working ages (between 25 and 64 years) has been increasing in recent years thanks to reductions in fertility. This shift in the age distribution provides a time-bound opportunity for accelerated economic growth known as the “demographic dividend”.

• To maximise the potential benefits of a favourable age distribution, countries need to invest in the further development of their human capital by ensuring access to health care and quality education at all ages and by promoting opportunities for productive employment and decent work.

• Despite the continuing decline in the average number of births per woman, the total annual number of births has remained stable at around 140 million since the late 1980s due to the youthful age distribution of the global population.

• The number of births approached 140 million per year in the late 1980s, when the large cohorts of the earlier “baby boom” of the 1950s and 1960s were having their children.

• In 2021, 134 million babies were born worldwide. In the future, the number of newborns is expected to slightly increase to reach 138 million annually between 2040 and 2045, despite the continuous decline in the average number of births per woman.

• In 2021, most births worldwide occurred in the two most populous regions — Central and Southern Asia (28 per cent of global births) and Eastern and South-Eastern Asia (18 per cent)— and in sub-Saharan Africa (29 per cent), the region with the highest fertility level.

• The populations of 61 countries or areas are projected to decrease by 1 per cent or more between 2022 and 2050, owing to sustained low levels of fertility and, in some cases, elevated rates of emigration.

• Total fertility has fallen markedly in recent decades for many countries. Today, two-thirds of the global population lives in a country or area where fertility is below 2.1 births per woman, roughly the level required for zero growth in the long run for a population with low mortality.

• Among countries with at least half a million people, the largest relative reductions in population size until 2050, with losses of 20 per cent or more, are expected to occur in Bulgaria, Latvia, Lithuania, Serbia and Ukraine.

• A large portion of the gap between countries with the lowest and highest levels of life expectancy at birth is attributable to disparities in the under-five mortality rate, which represents the probability of dying between birth and age five.

• Progress in reducing under-five mortality has been substantial and far-reaching in recent years, yet gaps remain. Globally, the under-five mortality rate fell from 92.8 deaths per 1,000 live births in 1990 to 37.1 in 2021. Still, a child born in sub-Saharan Africa in 2021 is 20 times as likely to die before his or her fifth birthday as a child born in Australia and New Zealand.