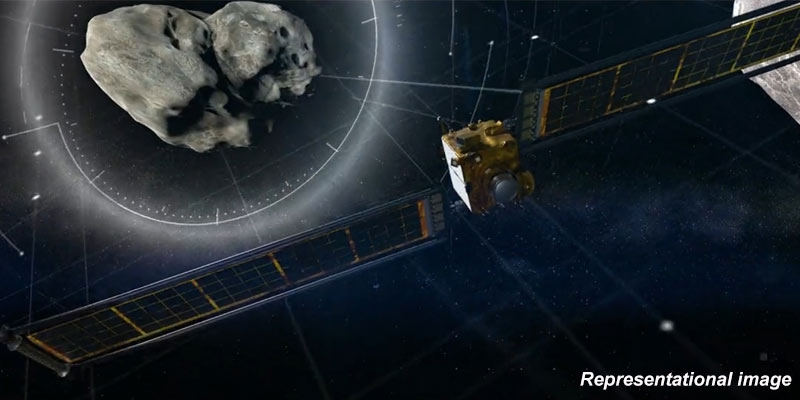 NASA’s DART spacecraft successfully slammed into a distant asteroid at hypersonic speed on September 26 in the world’s first test of a planetary defence system.

The $330 million mission, some seven years in development, was devised to determine if a spacecraft is capable of changing the trajectory of an asteroid through sheer kinetic force, nudging it off course just enough to keep Earth out of harm’s way.

The importance of planetary defence

• Near-Earth objects (NEOs) are asteroids and comets that orbit the Sun like the planets, but their orbits can bring them into Earth’s neighborhood — within 30 million miles of Earth’s orbit.

• On February 15, 2013, an undetected asteroid entered Earth’s atmosphere and exploded over Chelyabinsk in Russia, causing an airburst and shockwave that struck six cities around the region. The blast injured more than 1,600 people and caused an estimated $30 million in damage. It was a stark reminder that potentially hazardous objects can enter Earth’s atmosphere at any time, and that even relatively small ones can be of concern. The Chelyabinsk object was just about 60 feet (18 meters) in size.

• Astronomers estimate that there are approximately 25,000 near-Earth asteroids close to 500 feet (140 meters) or larger in size — big enough to cause regional devastation if they were to hit Earth. This underscores the need to both discover and track near-Earth objects, as well as perform real-world tests of potential asteroid deflection.

• Asteroids, like Earth and the other planets, orbit the Sun, but they become hazardous only if their orbits and Earth’s orbit intersect at the same point and time. The key to preventing an impact is the ability to predict such mutual arrivals well in advance, then alter the asteroid’s path, even slightly, to make the asteroid arrive early or late, missing a collision with Earth.

• Planetary defence encompasses all the capabilities needed to detect and warn of potential asteroid or comet impacts with Earth, and either prevent them or mitigate their possible effects.

• NASA’s Planetary Defence provides early detection of potentially hazardous objects (PHOs) – the subset of NEOs whose orbits predict they will come within 5 million miles of Earth’s orbit, and of a size large enough (30 to 50 meters) to damage Earth’s surface. 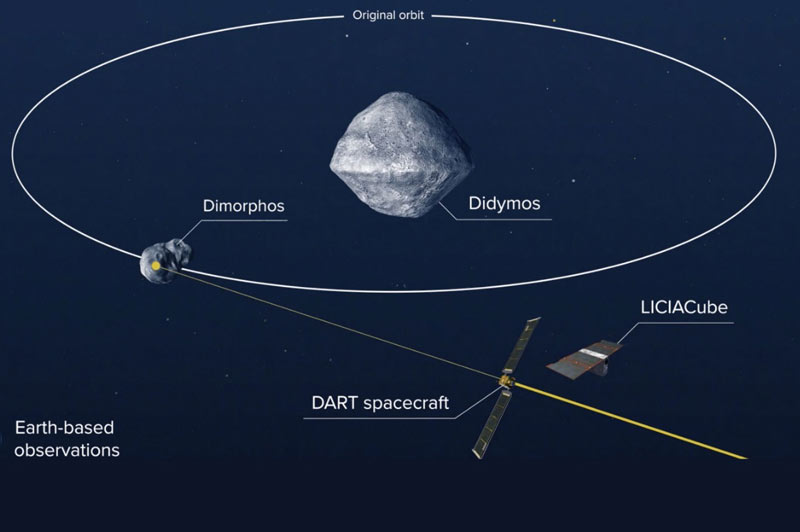 • DART is the first-ever mission dedicated to investigating and demonstrating one method of asteroid deflection by changing an asteroid’s motion in space through kinetic impact.

• The DART spacecraft was built and is operated by the Johns Hopkins Applied Physics Laboratory (APL) in Laurel, Maryland, at the direction of NASA’s Planetary Defense Coordination Office (PDCO).

• Didymos — which means “twin” in Greek — was discovered on April 11, 1996. The name is a loose description of the larger main body and the smaller orbiting moon. Dimorphos, which means “two forms”, reflects the status of this object as the first celestial body to have the ‘form’ of its orbit significantly changed by humanity. The Dimorphos moonlet is one of the smallest astronomical objects to receive a permanent name and is one of 27,500 known near-Earth asteroids of all sizes tracked by NASA.

• The spacecraft’s sole instrument, the Didymos Reconnaissance and Asteroid Camera for Optical navigation (DRACO), together with a sophisticated guidance, navigation and control system that works in tandem with Small-body Maneuvering Autonomous Real Time Navigation (SMART Nav) algorithms, enabled DART to identify and distinguish between the two asteroids, targeting the smaller body.

• These systems guided the 570-kilogram box-shaped spacecraft through the final 90,000 kilometers of space into Dimorphos, intentionally crashing into it at roughly 22,530 kilometers per hour to slightly slow the asteroid’s orbital speed. DRACO’s final images, obtained by the spacecraft seconds before impact, revealed the surface of Dimorphos in close-up detail.

• The mission’s one-way trip confirmed NASA can successfully navigate a spacecraft to intentionally collide with an asteroid to deflect it, a technique known as kinetic impact.

• DART’s CubeSat companion Light Italian CubeSat for Imaging of Asteroids (LICIACube), provided by the Italian Space Agency, will provide a view of the collision’s effects to help researchers better characterise the effectiveness of kinetic impact in deflecting an asteroid. Because LICIACube doesn’t carry a large antenna, images will be downlinked to Earth one by one in the coming weeks.

• The investigation team will now observe Dimorphos using ground-based telescopes to confirm that DART’s impact altered the asteroid’s orbit around Didymos. Researchers expect the impact to shorten Dimorphos’ orbit by about 1 per cent, or roughly 10 minutes, precisely measuring how much the asteroid was deflected is one of the primary purposes of the full-scale test.

• This mission also engages the international planetary science community in many ways, embracing worldwide cooperation to address the global issue of planetary defense.

• Roughly four years from now, the European Space Agency’s Hera project will conduct detailed surveys of both Dimorphos and Didymos, with a particular focus on the crater left by DART’s collision and a precise measurement of Dimorphos’ mass.