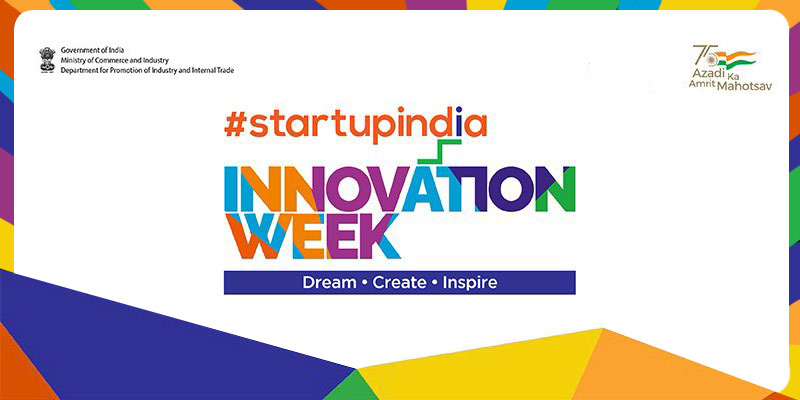 The Department for Promotion of Industry and Internal Trade (DPIIT) is organising the first-ever Startup India Innovation Week from January 10-16, 2022.

This virtual week-long innovation celebration aims to commemorate the 75th year of India’s independence ‘Azadi Ka Amrit Mahotsav’ and is designed to showcase the spread and depth of entrepreneurship across India.

Its primary goal is to bring together the country's key startups, entrepreneurs, investors, incubators, funding entities, banks, policymakers, and other national/international stakeholders to celebrate entrepreneurship and promote innovation.

What is a startup?

The definition of startups was modified in 2019 with a view to include more entrepreneurs in its ambit.

An entity shall be considered as a startup:

• If it is incorporated as a private limited company (as defined in the Companies Act, 2013) or registered as a partnership firm (under Section 59 of the Partnership Act, 1932) or a limited liability partnership (under the Limited Liability Partnership Act, 2008) in India.

• Up to ten years from the date of its incorporation/registration.

• If its turnover for any of the financial years since incorporation/registration has not exceeded Rs 100 crore.

• If it is working towards innovation, development or improvement of products or processes or services, or if it is a scalable business model with a high potential of employment generation or wealth creation.

• Startups in India are now spread across the length and breath of the entire country. The shift in global focus is on promoting women entrepreneurs and fostering an inclusive and innovative environment.

• Efforts are also being made by diverse stakeholders in the Indian startup ecosystem to elevate domestic policies in concurrence with global trends.

• Two decades ago, there were only a few active investors and a limited number of support organisations, such as incubators and accelerators. However, in the past decade. There has been a significant increase in both investment activity and infrastructure facilities to provide the much-needed impetus to the expansion of the Unicorn tribe.

• A Unicorn is a term used to indicate a privately held startup company with a valuation of over $1 billion. In 2014, there were only five Unicorns in India. The number has increased significantly to 81, thereby making India the third largest ecosystem of Unicorns in the world after the US and China.

• The DPIIT has recognised more than 61,000 startups. The startups representing 55 industries are spread across 633 districts with at least one startup from every state and UT of the country.

• Startup ecosystem expansion is driven by rapid growth of startup hubs in tier-2 and tier-3 cities such as Ahmedabad, Jaipur, Kolkata, Kochi, Kanpur Chandigarh and Coimbatore.

• Although there has been an increase in angel and venture capital funding, the amount invested must be augmented. It is crucial that the ecosystem is well integrated to connect startups to fund houses and other stakeholders.

• The startup ecosystem in India comprises a multitude of stakeholders. While the founders, entrepreneurs and their companies play the most important role in the pyramid, other stakeholders have proven to be drivers of growth in their entrepreneurial stories.

• Startup India is a flagship initiative of the government, intended to catalyze startup culture and build a strong and inclusive ecosystem for innovation and entrepreneurship in India.

• The Startup India Action Plan was launched on January 16, 2016 with the objective of supporting entrepreneurs, building a robust startup ecosystem, and transforming India into a country of job creators instead of job seekers.

• The Department for Promotion of Industry and Internal Trade (DPIIT) acts as the nodal department for coordinating the efforts of all central government departments and state governments in carrying this plan forward.

Department for Promotion of Industry and Internal Trade (DPIIT)

It was then renamed as the Department for Promotion of Industry and Internal Trade (DPIIT).