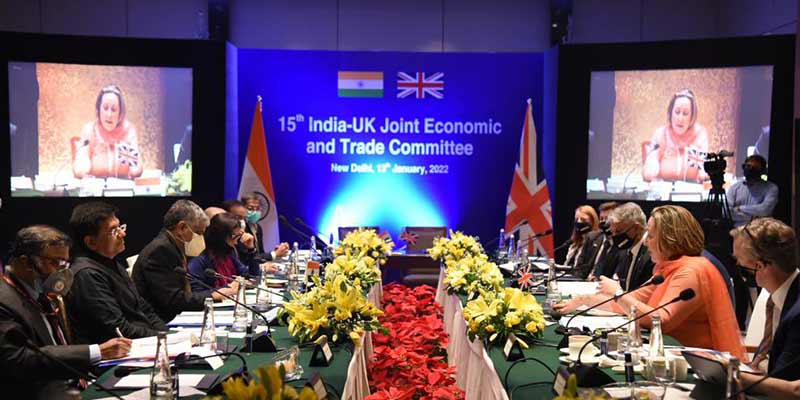 • India and the UK formally launched negotiations for the proposed free trade agreement (FTA), which is expected to help double bilateral trade by 2030 and boost economic ties between the two countries.

• A free trade agreement is an international treaty between two or more economies that reduces or eliminates certain barriers to trade in goods and services, as well as investment.

• The negotiations were launched by Commerce and Industry Minister Piyush Goyal and UK Secretary of State for International Trade Anne-Marie Trevelyan in New Delhi.

• The first round of negotiations will begin on January 17 and future rounds will take place approximately every five weeks.

• Both sides will strive to conclude the negotiations by December 2022.

• In May 2021, Prime Minister Narendra Modi and his British counterpart Boris Johnson committed to an Enhanced Trade Partnership which could double the trade by 2030, strengthening relationship and invigorating respective economies through an FTA. This Enhanced Trade Partnership is part of a wider 2030 Roadmap which covers the full spectrum of the UK-India bilateral relationship.

• The pact will help in boosting Indian exports of leather, textile, jewellery and processed agri products.

• Besides, the Mutual Recognition Agreements (MRAs) on pharma could provide additional market access. There is also great potential for increasing exports in service sectors like IT/ITeS, nursing, education, healthcare, including AYUSH and audio-visual services.

• India will also seek special arrangements for the movement of its people.

• In the services sector, the UK is the largest market in Europe for Indian IT services.

• A UK-India agreement would help to put Britain at the heart of the Indo-Pacific region, an area representing over 40 per cent of global GDP and containing some of the world’s fastest growing economies. As these economies expand, it is key that the UK has access to their markets. An agreement with India would complement the UK’s other commitments in this region, such as trade agreements with Australia and New Zealand and ongoing negotiations with the 11 member countries of Comprehensive and Progressive Agreement for Trans-Pacific Partnership (CPTPP).