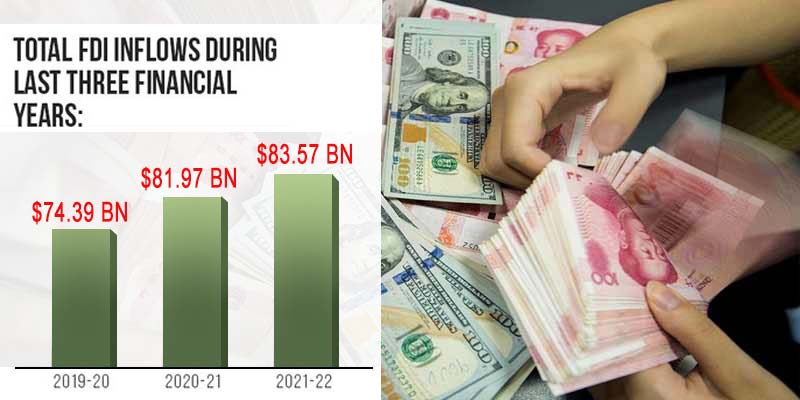 • The ministry of commerce & industry said that it is the highest ever annual FDI inflow in a financial year.

• The foreign inflows are increasing despite challenges like a military operation in Ukraine and COVID-19 pandemic.

• In terms of top investor countries, Singapore is at the top with a 27 per cent share, followed by the United States (18 per cent) and Mauritius (16 per cent) during the last fiscal.

• Among sectors, computer software and hardware attracted maximum inflows. It was followed by the services sector and automobile industry.

• Karnataka is the top recipient state with a 38 per cent share of the total FDI equity inflow reported during 2021-22 followed by Maharashtra (26 per cent) and Delhi (14 per cent). Majority of the equity inflow of Karnataka has been reported in the sectors computer software & hardware (35 per cent), automobile industry (20 per cent) and education (12 per cent) during the FY 2021-22.

• Foreign direct investment (FDI) is a major driver of economic growth and a source of non-debt finance for the economic development of India.

• After abolition of the erstwhile foreign investment Promotion Board (FIPB), process for granting FDI approvals has been simplified wherein the work relating to processing of applications for FDI and approval of the government thereon under the extant FDI Policy and FEMA, is now handled by the concerned ministries/departments.

• The Department for Promotion of Industry and Internal Trade (DPIIT) is mandated with the task of formulation of FDI policy of the government of India.

• A portal (www.fifp.gov.in ) has been created, which is administered by this Department and the portal will continue to facilitate the single window clearance of applications which are through approval route.

• The policy pronouncements on FDI are made by DPIIT and necessary notifications are issued under Foreign Exchange Management Act, 1999.

• The DPIIT also maintains data on inward FDI into India based upon the remittances reported by the Reserve Bank of India (RBI).

• FDI in India is permitted either through the automatic route or the government approval route.

Automatic Route: Under the Automatic Route, the non-resident investor or the Indian company does not require any approval from the government of India for the investment.

• It has been the intent and objective of the government to attract and promote FDI and make the FDI policy regime more investor friendly, in keeping with national interests.

• In line with its stated objective, the government has put in place a transparent and easily comprehensible policy framework on FDI.

• Further, FDI policy regime has been liberalised continuously over the years wherein FDI up to 100 per cent is permitted under automatic route in most sectors/activities.

Coal sector: 100 per cent FDI permitted under automatic route in coal mining activities, including associated processing infrastructure, for sale of coal, subject to the provisions of Coal Mines (Special Provisions) Act, 2015 and the Mines and Minerals (Development and Regulation) Act, 1957 as amended from time to time and other relevant Acts on the subject.

Insurance sector: The government has increased the FDI limit in the insurance sector under the automatic route to 75 per cent from 49 per cent earlier. The new arrangement is expected to benefit 23 private life insurers, 21 private non-life insurers and seven specialised private health insurance companies.

Civil Aviation: Government amended the extant FDI policy to permit foreign investment in Air India Ltd by NRIs, who are Indian Nationals, up to 100 per cent under automatic route.

Defence sector: FDI in defence sector is allowed up to 74 per cent through automatic route (from earlier 49 per cent) for companies seeking new industrial licenses. FDI beyond 74 per cent and up to 100 per cent will be permitted under the government route.

For existing FDI approved holders/defence licensees, infusion of fresh foreign investment up to 49 per cent resulting in change in equity/shareholding pattern can be done by making declaration within 30 days (earlier government approval was required). Now, foreign investments in the defence sector shall be subject to scrutiny on grounds on national security.