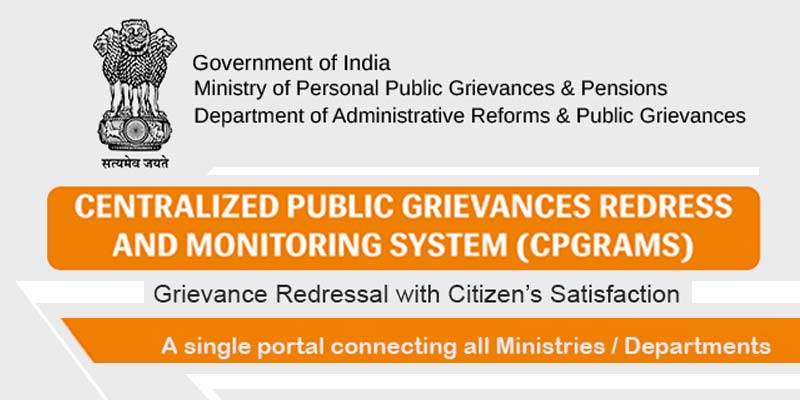 • Union Minister Jitendra Singh said the time for redressal of public grievances received on an online portal has been reduced from 45 to 30 days.

• An order issued by the Department of Administrative Reforms and Public Grievance (DARPG) also states that a complaint received from a citizen will not be closed until an appeal filed against it is disposed of.

• Last year, the DARPG had reduced the maximum time limit to 45 days from 60 days to resolve public grievances.

• The latest order mandates that the grievances received on the Centralised Public Grievance Redress and Monitoring System (CPGRAMS) shall be resolved promptly as soon as they are received but within a maximum period of 30 days.

• In case the redress is not possible within the prescribed time-frame due to the circumstances such as sub-judice matters/policy issues etc, an interim/appropriate reply shall be given to the citizen.

• This measure will go a long way in furthering the citizen-centric governance, as the government is ensuring that grievances are disposed of as expeditiously as possible.

The mechanism of grievance resolution

The Allocation of Business Rules, 1961, allocates to Department of Administrative Reforms and Public Grievances (DARPG) the responsibility for policy, coordination and monitoring of issues relating to:

a) Redressal of public grievances in general

• The Public Grievance Division has been responsible for this activity since December 1987.

• The Public Grievances Division has undertaken various activities  to improve the grievance redressal mechanism and to provide a citizen centric governance.

• CPGRAMS aims to enable submission of grievances by the aggrieved citizens from anywhere and anytime (24x7) basis to ministries/departments/ organisations who scrutinize and take action for speedy and favorable redress of these grievances.

• Tracking grievances is also facilitated on this portal through the system generated unique registration number.

• National Informatics Centre (NIC) through its Information and Communication Technology (ICT) Network — NICNET, has institutional linkages across all the ministries/departments of the central government, state governments, Union Territories and district administrations of the country. NICNET is a satellite-based nationwide computer-communication network, that is a type of Wide Area Network (WAN).

Issues which are not taken up for redressal:

• Sub-judice cases or any matter concerning judgment given by any court.

• Anything that impacts upon territorial integrity of the country or friendly relations with other countries.

Key points of the new order:

• The DARPG has asked all departments to appoint nodal grievance resolution officers (GROs) and to empower them adequately to resolve public complaints.

• They may appoint as many GROs as deemed necessary based on the number of public grievances received under the overall supervision of the nodal grievance resolution officer.

• After closure of a grievance, citizens have the option to submit their feedback and file an appeal and to obtain the feedback on the quality of grievance disposed, an outbound call centre has been started.

• Citizens will be provided the option to file an appeal if they are not satisfied with the grievance disposed of and the feedback received from citizens by the call centre will be shared with ministries or departments who would be responsible to deal with the feedback and to make systemic improvements.

• To institutionalise the mechanism of grievance resolution and to ensure quality disposal, the secretary of the ministry/department may review the disposal process in senior officers meetings.

• Apart from this, ministries/departments may also monitor complaints which may be raised in print, electronic and social media.