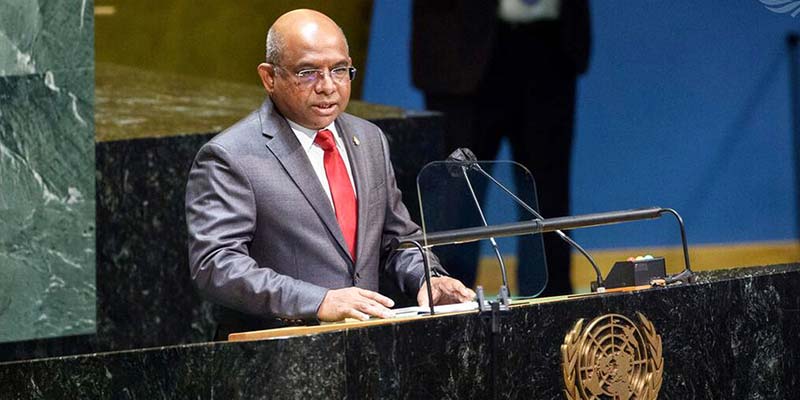 • Maldives Foreign Minister Abdulla Shahid was elected as president of the 76th Session of the United Nations General Assembly (UNGA), garnering 143 votes out of the 191 ballots cast.

• The General Assembly voted on June 7 to elect the president, who will preside over the upcoming session of the UN body that will commence in September.

• Shahid will succeed Turkish diplomat Volkan Bozkir who was UNGA president for the 75th session that came amid the COVID-19 pandemic.

• India had already voiced its strong support for Shahid’s candidature, saying he is best equipped to preside over the General Assembly of 193 nations of the world.

• Coming from a small island developing state, Shahid will bring unique insights to the 76th Session of the General Assembly, ahead of the UN Climate Change Conference of the Parties (COP26) in Glasgow in November, UN Secretary General Antonio Guterres said. 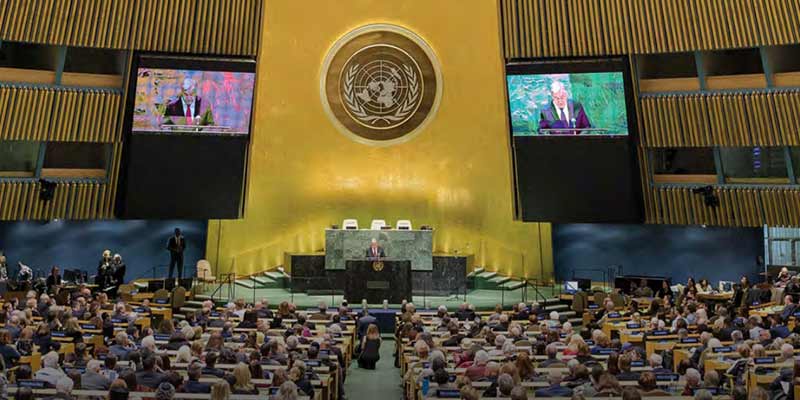 • The General Assembly is one of the six principal organs of the UN, serving as the main deliberative, policy-making, and representative organ of the UN.

• Its powers, composition, functions, and procedures are set out in Chapter IV of the United Nations Charter.

• The UNGA is responsible for the UN budget, appointing the non-permanent members to the Security Council, appointing the Secretary-General of the United Nations, receiving reports from other parts of the UN system, and making recommendations through resolutions.

• The Assembly holds its annual regular session from September to December. When necessary, a special session on subjects of particular concern may be called at the request of the Security Council, of a majority of the Member States, or of one member if the majority of the Member States agree. In addition, an emergency session can be called within 24 hours in the same manner.

• All the 193 Member States are represented in the General Assembly. Each Member State has one vote.

• Decisions on such key issues as international peace and security, admitting new members and the UN budget are decided by a two-thirds majority.

• Other matters are decided by simple majority. Many decisions are reached by consensus without a formal vote.

• Unlike the Security Council, there is no veto power bestowed to anyone.

• At the beginning of each regular session the General Assembly holds a General Debate when many Heads of State come to express their views on the most pressing international issues.

• Following the General Debate, most issues are discussed in one the Assembly’s six main committees. They are:

Under the UN Charter, the functions and powers of the General Assembly (GA) include:

• To discuss any question relating to international peace and security (except when a dispute or situation is being discussed by the Security Council).

• To make recommendations for the peaceful settlement of any situation which might harm the friendly relations among nations.

• To discuss and make recommendations on the powers and functions of any organ of the United Nations.

• To request studies and make recommendations to promote international cooperation, the development of international law, the protection of human rights, and international collaboration on economic, social, cultural, educational and health issues.

• To receive and discuss reports from the Security Council and other UN organs.

• To discuss and approve the UN budget.

• To elect the judges of the International Court of Justice (jointly with the Security Council).

• To appoint the Secretary-General on the recommendation of the Security Council.

How is the president of UNGA elected?

• Traditionally, a regional group agrees on one candidate and presents his or her candidature for election as president of the General Assembly, paving the way for election by acclamation.

• According to the established rules of regional rotation, the president of the 76th session of the General Assembly was to be elected from the Group of Asia-Pacific States.

• The president is elected at least three months before formally assuming office, usually in mid-June. This allows him/her to prepare and to assemble a team before the GA session begins in September.

• In the fray for the election was Shahid as well as former foreign minister of Afghanistan Zalmai Rassoul, who got 48 votes.

• Shahid is the first president-elect of the General Assembly from the Maldives in the 75 year-old history of the UN and in the 55 years since the Maldives became a United Nations member.