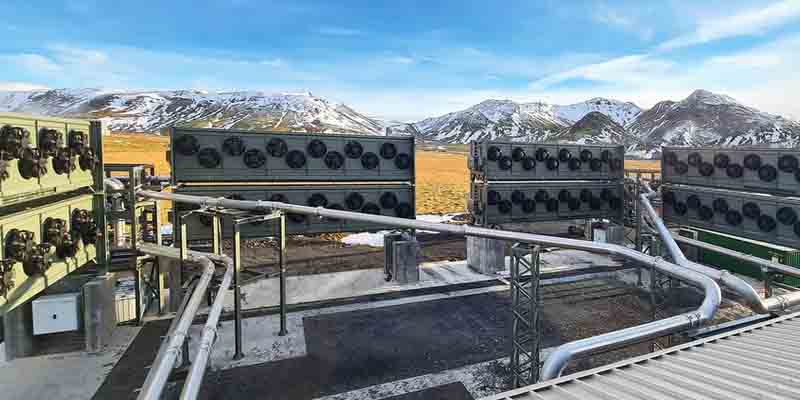 • The world’s largest plant — Orca — that sucks carbon dioxide directly from the air and deposits it underground has started running in Iceland.

• Direct air capture is one of the few technologies extracting carbon dioxide from the atmosphere and is viewed by scientists as vital to limit global warming.

How does the Orca plant work?

• Swiss start-up Climeworks AG, which specialises in capturing carbon dioxide directly from the air, has partnered with Icelandic carbon storage firm Carbfix to develop a plant that sucks out up to 4,000 tonnes of CO2 per year.

• That is the equivalent of the annual emissions from about 790 cars. Last year, global CO2-emissions totalled 31.5 billion tonnes, according to the International Energy Agency.

• The Orca plant, a reference to the Icelandic word for energy, consists of eight large containers similar in looks to those used in the shipping industry, which employ high-tech filters and fans to extract carbon dioxide.

• The isolated carbon is then mixed with water and pumped deep underground, where it slowly turns into rock. Both technologies are powered by renewable energy sourced from a nearby geothermal power plant. 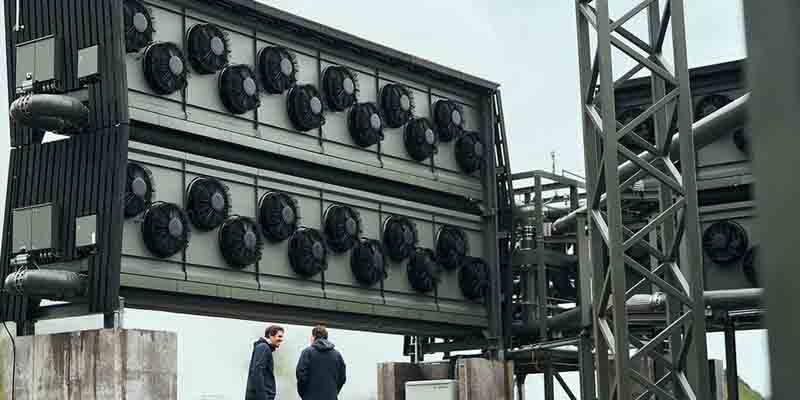 What is direct air capture?

• Direct air capture is one of few technology options available to remove CO2 from the atmosphere.

• The CO2 can be permanently stored in deep geological formations or used in the production of fuels, chemicals, building materials and other products containing CO2. When CO2 is geologically stored, it is permanently removed from the atmosphere, resulting in negative emissions.

• Carbon removal is expected to play a key role in the transition to a net-zero energy system in which the amount of CO2 released into the atmosphere is equivalent to the amount being removed. Because certain sectors such as aviation and heavy industry are difficult to decarbonise, carbon removal technologies can offset these emissions and support a faster transition.

• Today, two technology approaches are being used to capture CO2 from the air.

• Liquid systems pass air through chemical solutions (eg: a hydroxide solution), which removes the CO2 while returning the rest of the air to the environment.

• Solid direct air capture technology makes use of solid sorbent filters that chemically bind with CO2. When the filters are heated, they release the concentrated CO2, which can be captured for storage or use.

Some benefits of direct air capture as a carbon removal option include its limited land and water footprint and the possibility of locating plants close to suitable storage or utilisation sites, eliminating the need for long-distance CO2 transport.

• Costs and energy needs vary according to the type of technology (solid or liquid) and whether the captured CO2 is going to be geologically stored or used immediately at low pressure.

• In fact, CO2 needs to be compressed at a very high pressure in order to be injected into geological formations. This step increases both the capital cost of the plant (due to the requirement for additional equipment such as a compressor) and the operating costs (to run the compressor).

• Direct air capture is still a fledgling and costly technology, but developers hope to drive down prices by scaling up as more companies and consumers look to reduce their carbon footprint.

• As many as 15 direct air capture plants are currently operational in Europe, the United States and Canada. Most of these plants are small and sell the captured CO2 for use — for carbonating drinks, for example.

• However, the first large-scale direct air capture plant is now being developed in the United States by a Carbon Engineering and Occidental Petroleum partnership. The plant will capture up to 1 metric tons of carbon dioxide (MtCO2) each year for use in enhanced oil recovery and could become operational as early as 2023.