23 million children missed out on basic vaccines in 2020

• Around 23 million children missed out on basic vaccines through routine immunisation services in 2020 – 3.7 million more than in 2019 – according to official data published by WHO and UNICEF.

• Unprotected children are those who are unvaccinated (no vaccine) or under-vaccinated (incomplete vaccination), that is, any child who has not received any or few doses of their due vaccination.

• Concerningly, most of these – up to 17 million children – likely did not receive a single vaccine during the year, widening already immense inequities in vaccine access.

• Most of these children live in communities affected by conflict, in under-served remote places, or in informal or slum settings where they face multiple deprivations including limited access to basic health and key social services. 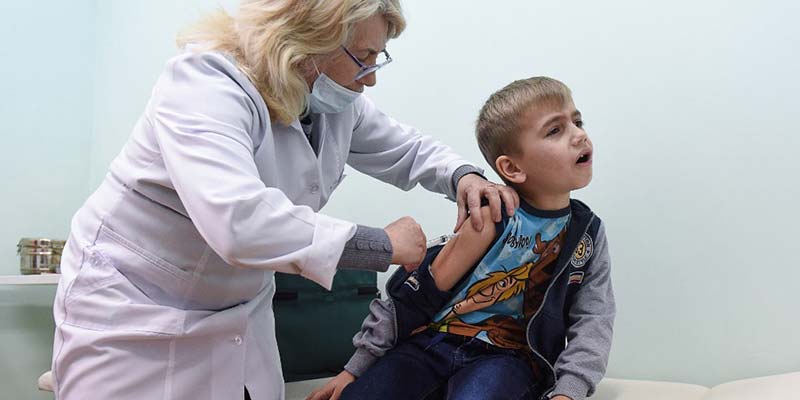 Importance of data on immunisation coverage

• Immunisation is one of the most cost-effective public health interventions to date, saving an estimated 2 to 3 million lives each year.

• As a direct result of immunisation, the world is closer than ever to eradicating polio, and deaths from measles – a major child killer – have declined by 73 per cent worldwide between 2000 and 2018, saving an estimated 23.2 million children’s lives.

• The emergence of COVID-19, however, threatens to reverse this progress by severely limiting access to life-saving vaccines.

• Every year, UNICEF and the World Health Organisation (WHO) produce a new round of immunisation coverage estimates, enabling a critical assessment of how well we are doing in reaching every child with life-saving vaccines.

• Based on country-reported data, the official WHO and UNICEF estimates of national immunisation coverage (WUENIC) provide the world’s largest data-set on immunisation trends for vaccinations against 13 diseases given through regular health systems.

• Such data help spotlight where progress is lacking, including where reversals in immunisation coverage are happening, and where there are areas of success. Both pieces of information are instrumental to monitoring progress towards global frameworks such as the Global Vaccine Action Plan, the Sustainable Development Goals, and the next Immunisation Agenda 2030 (IA2030), and for triggering investigations into why immunisation coverage is increasing or decreasing in different countries.

• Further research in countries where immunisation coverage has stagnated or regressed makes it possible for partners to work together to address identified bottlenecks to universal coverage.

• In addition, examination of the factors contributing to observed increases in coverage in specific contexts can provide lessons for other countries as they scale up and improve their immunisation programmes.

• In March 2020, the novel coronavirus disease COVID-19 was declared a global pandemic, triggering the declaration of national emergencies in many countries as they mounted their responses to the public health threat.

• By May, data collected by WHO, UNICEF, the US Centers for Disease Control and Prevention (CDC), Gavi and the Sabin Boost Initiative showed that country lockdown measures had substantially hindered the delivery of immunisation services in many countries. 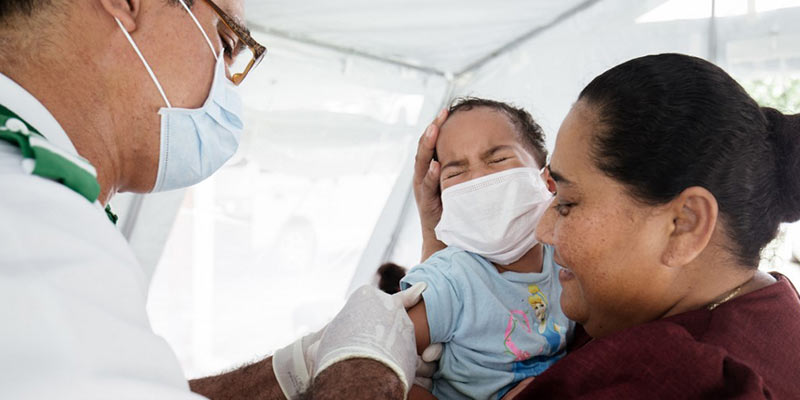 Highlights of the data:

• Disruptions in immunisation services were widespread in 2020, with the WHO Southeast Asian and Eastern Mediterranean Regions most affected.

• These disruptions threaten to reverse hard-won progress to reach more children and adolescents with a wider range of vaccines, which has already been hampered by a decade of stalling coverage.

• As access to health services and immunisation outreach were curtailed, the number of children not receiving even their very first vaccinations increased in all regions.

• Globally, the vaccination rate for three doses of diphtheria-tetanus-pertussis (DTP-3) vaccine fell from around 86 per cent in 2019 to 83 per cent in 2020, meaning 22.7 million children missed out.

• During 2020, about 83 per cent of infants worldwide (113 million infants) received three doses of diphtheria-tetanus-pertussis (DTP-3) vaccine, protecting them against infectious diseases that can cause serious illness and disability or be fatal.

• This is the first time in 28 years that the world could see a reduction in DTP-3 coverage – the marker for immunisation coverage within and across countries.

• For measles first dose, vaccination rate fell from 86 to 84 per cent, meaning 22.3 million children missed out. Vaccination rates for measles second dose were at 71 per cent (from 70 per cent in 2019). To control measles, 95 per cent uptake of two vaccine doses is required. Countries that cannot reach that level rely on periodic nationwide vaccination campaigns to fill the gap.

• Progress on immunisation coverage was stalling before COVID-19 hit, at 85 per cent for DTP-3 and measles vaccines. The likelihood that a child born today will be fully vaccinated with all the globally recommended vaccines by the time she reaches the age of 5 is less than 20 per cent.

• Already at low rates, vaccinations against human papillomavirus (HPV) - which protect girls against cervical cancer later in life — have been highly affected by school closures. As a result, across countries that have introduced HPV vaccine to date, approximately 1.6 million more girls missed out in 2020. Globally only 13 per cent of girls were vaccinated against HPV, falling from 15 per cent in 2019.

• The data shows that middle-income countries now account for an increasing share of unprotected children – that is, children missing out on at least some vaccine doses.

• India is experiencing a particularly large drop, with DTP-3 coverage falling from 91 per cent to 85 per cent.

• The Indian government clarified that it has worked with states, Union Territories and development partners towards mitigating negative impacts of COVID-19, and was making efforts to ensure children receive life-saving vaccines under the Universal Immunisation Programme.

• As a result of the commitment of the government and the public health workforce, the country has achieved 99 per cent DTP-3 coverage in the first quarter of 2021 (January-March) which is the highest DTP-3 coverage measured till date, it said.

A summary of global vaccination coverage in 2020

• Haemophilus influenzae type b (Hib) causes meningitis and pneumonia. Hib vaccine had been introduced in 192 Member States by the end of 2020. Global coverage with 3 doses of Hib vaccine is estimated at 70 per cent. There is great variation between regions. The WHO Region of South-East Asia is estimated to have 83 per cent coverage, while it is only 25 per cent in the WHO Western Pacific Region.

• Human papillomavirus (HPV) is the most common viral infection of the reproductive tract and can cause cervical cancer in women, other types of cancer, and genital warts in both men and women. The HPV vaccine was introduced in 111 Member States by the end of 2020. Since many large countries have not yet introduced the vaccine and vaccine coverage decreased in 2020 in many countries — global coverage with the final dose of HPV is now estimated at 13 per cent. This is a proportionally large reduction from 15 per cent in 2019.

• Meningitis A is an infection that is often deadly and leaves one in five affected individuals with long-term devastating sequelae. Before the introduction of MenAfriVac in 2010 – a revolutionary vaccine– meningitis serogroup A accounted for 80–85 per cent of meningitis epidemics in the African meningitis belt. By the end of 2020 almost 350 million people in 24 out of the 26 countries in the meningitis belt had been vaccinated with MenAfriVac through campaigns. 11 countries had included MenAfriVac in their routine immunisation schedule by 2020.

• Measles is a highly contagious disease caused by a virus, which usually results in a high fever and rash, and can lead to blindness, encephalitis or death. By the end of 2020, 84 per cent of children had received one dose of measles-containing vaccine by their second birthday, and 179 Member States had included a second dose as part of routine immunisation and 70 per cent of children received two doses of measles vaccine according to national immunisation schedules.

• Mumps is a highly contagious virus that causes painful swelling at the side of the face under the ears (the parotid glands), fever, headache and muscle aches. It can lead to viral meningitis. Mumps vaccine had been introduced nationwide in 123 Member States by the end of 2020.

• Pneumococcal diseases include pneumonia, meningitis and febrile bacteraemia, as well as otitis media, sinusitis and bronchitis. Pneumococcal vaccine had been introduced in 151 Member States by the end of 2020, including three in some parts of the country, and global third dose coverage was estimated at 49 per cent.

• Polio is a highly infectious viral disease that can cause irreversible paralysis. In 2020, 83 per cent of infants around the world received three doses of polio vaccine. In  2020, the coverage of infants receiving their first dose of inactivated polio vaccine (IPV) in countries that are still using oral polio vaccine (OPV) is estimated at 80 per cent. Targeted for global eradication, polio has been stopped in all countries except for Afghanistan and Pakistan. Until polio virus transmission is interrupted in these countries, all countries remain at risk of importation of polio, especially vulnerable countries with weak public health and immunisation services and travel or trade links to endemic countries.

• Rotaviruses are the most common cause of severe diarrhoeal disease in young children throughout the world. Rotavirus vaccine was introduced in 114 countries by the end of 2020, including three in some parts of the country. Global coverage was estimated at 46 per cent.

• Rubella is a viral disease which is usually mild in children, but infection during early pregnancy may cause fetal death or congenital rubella syndrome, which can lead to defects of the brain, heart, eyes, and ears. Rubella vaccine was introduced nationwide in 173 Member States by the end of 2020, and global coverage was estimated at 70 per cent.

• Tetanus is caused by a bacterium which grows in the absence of oxygen, for example in dirty wounds or the umbilical cord if it is not kept clean. The spores of C. tetani are present in the environment irrespective of geographical location. It produces a toxin which can cause serious complications or death. Maternal and neonatal tetanus persist as public health problems in 12 countries, mainly in Africa and Asia.

Notes
Immunisation Agenda 2030 (IA2030), IA2030 sets an ambitious, overarching global vision and strategy for vaccines and immunisation for the decade 2021–2030. It was co-created with thousands of contributions from countries and organizations around the world, and came into effect after World Health Assembly endorsement. It draws on lessons from the past decade and acknowledges continuing and new challenges posed by infectious diseases (eg: Ebola, COVID-19).
Related Topics
RELATED STORIES