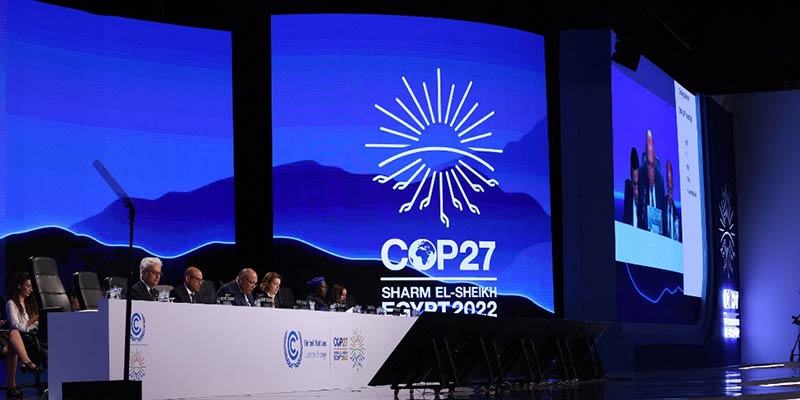 • Developing countries made strong and repeated appeals for the establishment of a “loss and damage” fund, to compensate the countries that are the most vulnerable to climate disasters, yet who have contributed little to the climate crisis.

• It is a funding mechanism to compensate vulnerable nations for ‘loss and damage’ from climate-induced disasters.

• The deal was widely lauded as a triumph for responding to the devastating impact that global warming is already having on vulnerable countries.

• India termed COP27 “historic” for securing an agreement on establishing a fund to address loss and damage due to climate change-induced disasters, saying the world has waited far too long for this.

• Set against a difficult geopolitical backdrop, COP27 resulted in countries delivering a package of decisions that reaffirmed their commitment to limit global temperature rise to 1.5°C above pre-industrial levels. The package also strengthened action by countries to cut greenhouse gas emissions and adapt to the inevitable impacts of climate change, as well as boosting the support of finance, technology and capacity building needed by developing countries.

• While agreement on these issues was seen as a welcome step in the right direction, there appeared to be little forward movement on other key issues, particularly on the phasing out of fossil fuels, and tightened language on the need to limit global warming to 1.5°C.

What is Loss and Damage Fund?

• Some development and adaptation efforts have reduced vulnerability, but the rise in weather and climate extremes has led to some irreversible impacts as natural and human systems are pushed beyond their ability to adapt.

• Loss and damage arising from the adverse effects of climate change can include those related to extreme weather events but also slow onset events, such as sea level rise, increasing temperatures, ocean acidification, glacial retreat and related impacts, salinisation, land and forest degradation, loss of biodiversity and desertification.

• Acknowledging that loss and damage includes, and in some cases involves more than that which can be reduced by adaptation, COP19 established the Warsaw International Mechanism for Loss and Damage.

• Since then, it has been serving as the main catalyzer under the UNFCCC process for enhancing knowledge, coherence, action and support to avert, minimise and address loss and damage associated with climate change impacts in developing countries that are particularly vulnerable to the adverse effects of climate change.

• In the broadest understanding, all efforts being taken to curb the global average temperature increase and to adapt to the adverse effects of climate change can contribute to preventing or reducing the risks of loss and damage associated with climate change borne by societies and individuals.

• Article 8 of the Paris Agreement enshrines the importance of averting, minimising and addressing loss and damage and the role of sustainable development in reducing the risk of loss and damage.

• Creating a specific fund for loss and damage marked an important point of progress, with the issue added to the official agenda and adopted for the first time at COP27.

• Governments took the ground-breaking decision to establish new funding arrangements, as well as a dedicated fund, to assist developing countries in responding to loss and damage.

• Governments also agreed to establish a ‘transitional committee’ to make recommendations on how to operationalise both the new funding arrangements and the fund at COP28 next year.

• The first meeting of the transitional committee is expected to take place before the end of March 2023.

• Parties also agreed on the institutional arrangements to operationalise the Santiago Network for Loss and Damage, to catalyse technical assistance to developing countries that are particularly vulnerable to the adverse effects of climate change.

• The COPs are the biggest and most important annual climate-related conferences on the planet.

• In 1992, the UN organised the Earth Summit in Rio de Janeiro, Brazil, in which the UN Framework Convention on Climate Change (UNFCCC) was adopted and its coordinating agency — what we know now as the UN Climate Change secretariat — was put into place.

• In this treaty, nations agreed to “stabilise greenhouse gas concentrations in the atmosphere to prevent dangerous interference from human activity on the climate system”.

• Since 1994, when the treaty entered into force, every year the UN has been bringing together almost every country on earth for global climate summits or “COPs”, which stands for ‘Conference of the Parties’.

• Currently, there are 198 Parties (197 States and 1 regional economic integration organisation) to the United Nations Framework Convention on Climate Change.

• During these meetings, nations have negotiated various extensions of the original treaty to establish legally binding limits on emissions, for example, the Kyoto Protocol in 1997 and the Paris Agreement adopted in 2015, in which all countries agreed to step up efforts to try and limit global warming to 1.5°C above pre-industrial temperatures, and boost climate action financing.

• The 27th annual Conference of the 198 Parties of the UN Framework Convention on Climate Change, better known as COP27, began on November 6 in Egypt’s Sharm el-Sheikh. 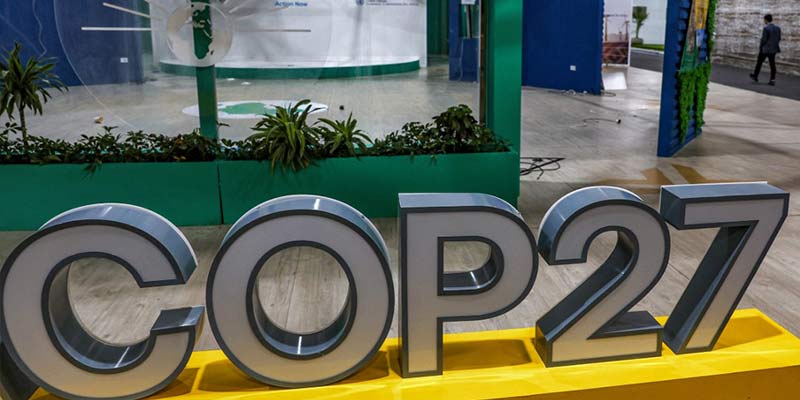 • COP27 brought together more than 45,000 participants to share ideas, solutions, and build partnerships and coalitions. Indigenous peoples, local communities, cities and civil society, including youth and children, showcased how they are addressing climate change and shared how it impacts their lives.

• COP27 saw significant progress on adaptation, with governments agreeing on the way to move forward on the Global Goal on Adaptation, which will conclude at COP28 and inform the first Global Stocktake, improving resilience amongst the most vulnerable.

• New pledges, totaling more than $230 million, were made to the Adaptation Fund at COP27.

• These pledges will help many more vulnerable communities adapt to climate change through concrete adaptation solutions.

• UN Climate Change’s Standing Committee on Finance was requested to prepare a report on doubling adaptation finance for consideration at COP28 next year.

• The cover decision, known as the Sharm el-Sheikh Implementation Plan, highlights that a global transformation to a low-carbon economy is expected to require investments of at least $4-6 trillion a year.

• Delivering such funding will require a swift and comprehensive transformation of the financial system and its structures and processes, engaging governments, central banks, commercial banks, institutional investors and other financial actors.

• Serious concern was expressed that the goal of developed country Parties to mobilize jointly $100 billion per year by 2020 has not yet been met, with developed countries urged to meet the goal, and multilateral development banks and international financial institutions called on to mobilize climate finance.

• At COP27, deliberations continued on setting a ‘new collective quantified goal on climate finance’ in 2024, taking into account the needs and priorities of developing countries.

The conference heard many announcements:

• UN Secretary-General Antonio Guterres announced a $3.1 billion plan to ensure everyone on the planet is protected by early warning systems within the next five years.

• Announcing a total of $105.6 million in new funding, Denmark, Finland, Germany, Ireland, Slovenia, Sweden, Switzerland, and the Walloon Region of Belgium, stressed the need for even more support for the Global Environment Facility funds targeting the immediate climate adaptation needs of low-lying and low-income states.

• The new Indonesia Just Energy Transition Partnership, announced at the G20 Summit held in parallel with COP27, will mobilise $20 billion over the next three to five years to accelerate a just energy transition.

• Important progress was made on forest protection with the launch of the Forest and Climate Leaders’ Partnership, which aims to unite action by governments, businesses and community leaders to halt forest loss and land degradation by 2030.