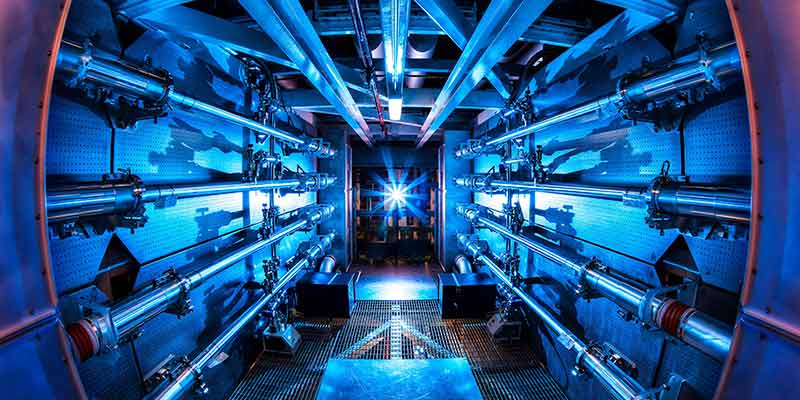 • For the first time, the scientists produced more energy in a fusion reaction than that was used to ignite it.

• Known as a net energy gain, the goal has been elusive because fusion happens at such high temperatures and pressures that it is incredibly difficult to control.

• It is a major scientific breakthrough that will pave the way for  advancements in defence and the future of clean power.

• This milestone takes one significant step closer to having zero-carbon fusion energy powering the society. 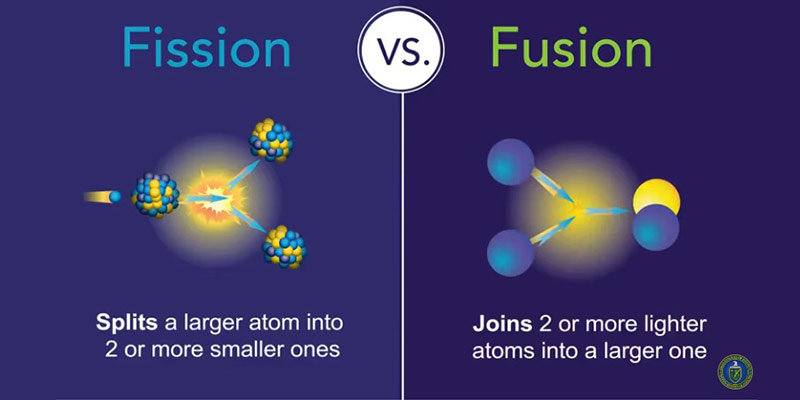 What is fusion and fission?

• Fusion and fission are two physical processes that produce massive amounts of energy from atoms.

• Fusion occurs when two atoms slam together to form a heavier atom, like when two hydrogen atoms fuse to form one helium atom.

• This is the same process that powers the sun and creates huge amounts of energy — several times greater than fission. It also doesn’t produce highly radioactive fission products.

• Fusion reactions are being studied by scientists, but are difficult to sustain for long periods of time because of the tremendous amount of pressure and temperature needed to join the nuclei together.

• A big advantage of fusion is it will most likely produce little radioactive waste compared to fission.

• Fission occurs when a neutron slams into a larger atom, forcing it to excite and split into two smaller atoms — also known as fission products. Additional neutrons are also released that can initiate a chain reaction. When each atom splits, a tremendous amount of energy is released.

• Uranium and plutonium are most commonly used for fission reactions in nuclear power reactors because they are easy to initiate and control. 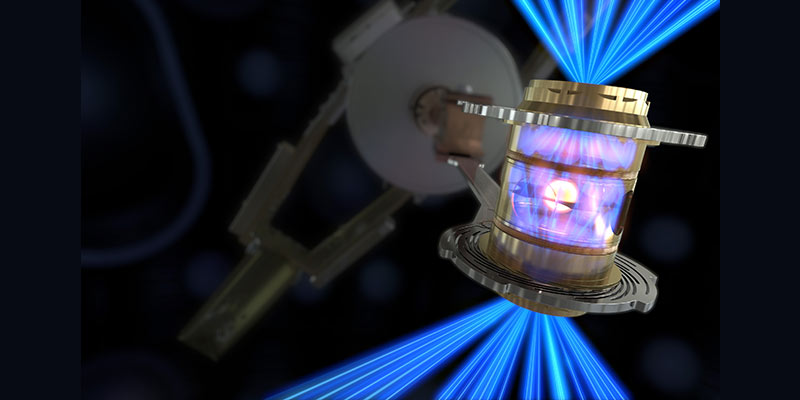 How was the experiment conducted?

• Scientists have known for about a century that fusion powers the Sun and have pursued developing fusion on Earth for decades.

• Fusion is the process by which two light nuclei combine to form a single heavier nucleus, releasing a large amount of energy.

• In the 1960s, a group of pioneering scientists at LLNL hypothesized that lasers could be used to induce fusion in a laboratory setting. Led by physicist John Nuckolls, who later served as LLNL director from 1988 to 1994, this revolutionary idea became inertial confinement fusion, kicking off more than 60 years of research and development in lasers, optics, diagnostics, target fabrication, computer modeling and simulation and experimental design.

• To pursue this concept, LLNL built a series of increasingly powerful laser systems, leading to the creation of National Ignition Facility (NIF), the world’s largest and most energetic laser system.

• National Ignition Facility — located at LLNL in Livermore, California — is the size of a sports stadium and uses powerful laser beams to create temperatures and pressures like those in the cores of stars and giant planets, and inside exploding nuclear weapons.

• On December 5, a team at NIF conducted the first controlled fusion experiment in history to reach this milestone, also known as scientific energy breakeven, meaning it produced more energy from fusion than the laser energy used to drive it.

• LLNL’s experiment surpassed the fusion threshold by delivering 2.05 megajoules (MJ) of energy to the target, resulting in 3.15 MJ of fusion energy output, demonstrating for the first time a most fundamental science basis for inertial fusion energy (IFE).

• The scientists focused a laser on a target of fuel to fuse two light atoms into a denser one, releasing the energy.

• Many advanced science and technology developments are still needed to achieve simple, affordable IFE to power homes and businesses.

• Combined with private-sector investment, there is a lot of momentum to drive rapid progress toward fusion commercialisation.

• Proponents of fusion hope it could one day displace fossil fuels and other traditional energy sources. Producing carbon-free energy that powers homes and businesses from fusion is still decades away. But researchers said the announcement marked a significant leap forward.